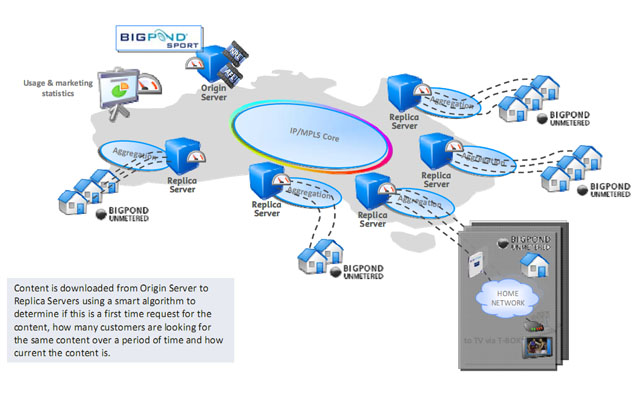 The nation’s largest telco Telstra has unveiled plans to substantially re-work its network infrastructure to deal with a massive influx of data expected to flow through its pipes as part of its IPTV strategy, which will this month see its flagship T-Box device launch.

In a briefing in Sydney today, Telstra chief operations officer Michael Rocca said the telco would build a national footprint of 12 network and media centres around Australia — which will provide a caching function to ensure the speedily delivery of internet video.

The company’s BigPond TV channels — covering areas from live news to sport and music — will be delivered to the T-Box platform from these centres, as well as to IP-enabled televisions from manufacturers like Sony, Toshiba, LG, Samsung, Sharp and Panasonic.

Telstra chief technology officer Hugh Bradlow said in 2013, video would account for 91 percent of consumer traffic — quoting statistics from giant US networking vendor Cisco. Confounding the traffic headache for the telco is the move to high-definition. Telstra is planning to bring HD video on demand to the T-Box in the next six months.

Telstra’s executive director of Network and Technology, Michael Lawrey, provided a chunk of further information about how the network & media centres would be set up around the country.
For starters, he said, they would be standardised, distributed, modular, agile, have a low incremental cost and feature virtualised infrastructure.

Telstra will be the sole systems integrator for the centres, and they will have low power requirements. For example, one centre will be set up in the Haymarket telephone exchange in Sydney. Lawrey said that for 330kW worth of equipment load in the Haymarket facility, in previous Telstra configurations it would have taken a further 270kW of energy to cool the equipment.

With the new configuration, only 59kW will be required for cooling. The new racks will be setup on the existing concrete slab floor — not on raised computer floors, and extremely cheap LED light will be used.

Lazaro said currently Telstra operated eight major datacentres across Australia — two major Sydney facilities including one in the massive Global Switch facility in Pyrmont and one in Melbourne with five other sites– a total floor space of 23,560 square metres using some 21.9MW.

In future, he said, Telstra would rationalise its IT infrastructure and expand high-density datacentre space in Melbourne, relocating load from other low power density sites.

The company is planning to standardise on a “strategic virtual platform” based on Intel x86 kit, and will consolidate and virtualise its Sun Microsystems SPARC platforms, as well as consolidating over 100 storae arrays to a handful in each site.