I was very excited to receive a review unit model of the new Kobo eBook reader in the post from Borders this afternoon. The device launched in Australia several weeks ago, immediately receiving praise from both Australia’s technology community and publishing community.

As I plugged the device into my PC and started charging it, I anticipated tuning into some high-brow literature.

Would I, I ruminated, start with Fyodor Dostoyevsky’s The Brothers Karamazov? Or maybe War and Peace? Or what about a modern cyberpunk thriller, something like William Gibson’s Neuromancer? Then, as I loaded up Borders’ online bookstore, I changed my mind and thought I might take a more populist approach. Maybe I should check out what the rest of Australia is reading these days before I jump into the traditional fare.

So I clicked through to the “Top 50” section in Borders’ eBooks store. I guess I shouldn’t be surprised by what I found.

Although Stieg Larsson’s Milennium Trilogy (The Girl with the Dragon Tattoo and so on) tops the list, number six is a somewhat less high-brow title: Triple Heat. 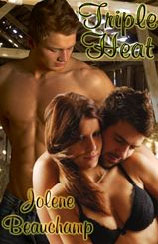 “Molly Gilbert has two secrets: a life-long dream of owning a farm and the fantasy of sharing her body with two men,” the synopsis screams. It’s accompanied by a raunchy picture of Molly and her farmhands, apparently named “Brad and Zeke”.

Next on the list is the appropriately named “Six Sexy Stories”, followed a little later by “The Wicked Night Before Christmas” and “Nothing But Scandal.”

All of the titles have the kind of covers that we assume the Federal Government is trying to ban from the prying eyes of innocent schoolchildren.