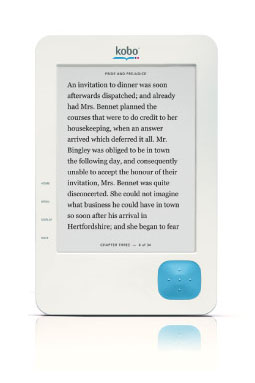 Borders stores around Australia have started stocking up on the Kobo eReader as the book retailer prepares for the official launch of the device next week.

The sources said the Kobo eReader had not been re-branded for Borders — it was simply the same stock standard device which has been revealed internationally.

The news comes as Borders last week invited journalists to an eBook/eReader launch on May 19 in Sydney. Although it did not reveal at that stage what eReader platform it was favouring, the retailer’s website has a promotional section for eBooks — labelled “Powered by Kobo”.

Borders brand owner REDgroup Retail announced in December that it would make eBooks available from its Borders and Angus & Robertson websites by May 2010, courtesy of an agreement with Kobo — a global eReading service. REDgroup’s Whitcoulls brand in New Zealand will also receive the services.

“Customers who download eContent via the Angus & Robertson, Borders or Whitcoulls websites will be able to read this on popular smartphones such as the iPhone, BlackBerry, Palm Pre and Android. REDgroup expects to launch Kobo with over 1,000,000 available eContent downloads including books, magazines and newspapers,” the company said in a statement in December.

It is not yet clear how large Borders’ electronic catalogue will be in Australia.