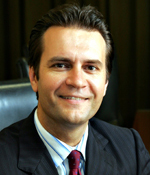 The trustees list of the of the Sydney Cricket & Sports Ground Trust reads like a roll call of Sydney blue blood royalty.

Former NSW Opposition Leader Kerry ‘Chika’ Chikarovski, radio shockjock Alan Jones, ex-Rugy Union star Ken Catchpole, legendary cricketer Steve Waugh … the list goes on. Half of the list has letters after their name and the other half have several centuries of professional sporting experience between them.

That’s why Delimiter was a little surprised to hear that a certain chief of a certain virtualisation company was looking to get his name on the list.

“I have been a member since 1988, and with 4 children make constant use of the facilities,” VMWare Australia’s enterprising MD Paul Harapin (pitch) wrote in his pitch to be voted into the august company of the other trustees. Harapin’s candidature was circulated to SCG members before election time.

The VMWare chief wrote that he would seek to increase the family friendliness of the Trust and open discussions around member numbers and the impact on facilities.

Harapin’s LinkedIn profile reveals he has quite diverse interests – he is a supporter of the Sydney Roosters, and is an avid guitar player, as well as being chairman of National Adoption Awareness Week.

But it was the last entry on his SCG pitch that caught our attention. “My experience listed above, running the 4th largest software company in the world and sitting on the board of various ‘Not for Profits”, positions me to represent your interests as a member,” he wrote.

We think VMWare CEO Paul Maritz might have something to say about that :)

PS: But Paul’s a pretty good bloke and has our full endorsement — make sure to vote for him if you’re a SCG member!