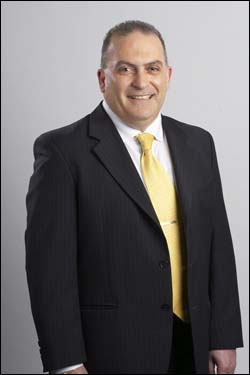 update Jacqueline Hey, the chief executive of Ericsson Australia and New Zealand, will shortly depart the role after less than a year and a half leading the Swedish networking giant’s Australian subsidiary, Delimiter has confirmed, with the head of its Telstra account, Sam Saba (pictured), to take the reins.

Hey took up the role in November 2008, returning to Australia from the United Kingdom after four years leading the company’s North West Europe arm. The executive had previously been the director for Ericsson’s Vodafone account in Australia, and had also held several senior roles within the Telstra account — one of Ericsson’s largest customers locally.

Hey’s predecessor, Bill Zikou, also returned from a European role in 2006 before retiring after several years in 2008.

In a statement issued late yesterday, Ericsson revealed that the head of its Telstra account, Sam Saba (pictured) would replace Hey as of 1 April. Saba is a director of Ericsson Australia and has led its Telstra business as key account manager for the past three years.

Saba has a BSc and MSc from the University of Louisiana, USA, is married with two children. And Ericsson’s statement said “the other love in his life is his Harley-Davidson motorcycle”.

He has previously worked for five years as Ericsson’s head of Services and Sales for the Middle East and as country manager for the United Arab Emirates, as well as a five-year stint as a key account manager in Indonesia.

“After joining as a graduate, in many ways I’ve ‘grown up’ with Ericsson and been fortunate to experience a variety of rewarding roles, both here and globally. But after 23 years it’s now time to consider a change and to hand the reins over to Sam Saba, one of our most experienced leaders,” said Hey.