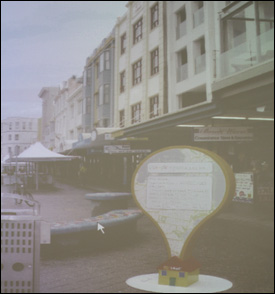 Google’s Australian division today unveiled a substantive marketing push to attract users to its real estate services integrated with its Google Maps product, but without the participation of several major online players in the market.

In partnership with real estate group LJ Hooker, Google today revealed it would dot Sydney with real life versions of the “pins” which indicate locations on its Google Maps platform, which since last year has been capable of overlaying its basic mapping service with real estate data such as houses available to rent or buy.

The pins (pictured) will be able to be viewed in various locations such as shopping centres and Bondi Beach.

The marketing push, which will also include a series of video advertisements featuring a character called “Peg Man”, is being timed to coincide with Google reaching the milestone of more than 1,000 real estate sites across Australia and New Zealand being linked in to the search giant’s Maps service.

At an event in its Pyrmont, Sydney headquarters, Google said it continued to see strong growth of real estate searches – the numbers of such queries are up nearly 30 per cent year on year between January 2009 and January 2009. Key partners who have linked their data into Google include Harcourts, the Real Estate Institute of Western Australia, Homehound, MyHome, LJ Hooker, Ray White, First National and Century 21.

However, at the event, the search giant acknowledged that industry giants Realestate.com.au (REA Group) and Fairfax Media’s Domain, which had expressed ambivalence about Google’s entrance into the market in late 2009, remained absent from its partner list.

Google’s strategic partner development manager David Heymann said the pair had “been clear” that at this stage they would not be making their content available.

Google product manager Andrew Foster acknowledged Realestate.com.au and Domain had “comprehensive” listings in the industry, but pointed out the over 1,000 other sites Google had partnered with, and said there was a genuine interest from the real estate industry in getting listings online, especially in regional areas and real estate agents themselves.

Because of the breadth, he said, Google had achieved “really deep listings” that audiences might not see on some other sites.

LJ Hooker marketing manager Heather Hilton, also at the launch, was asked if the company would produce a series of advertisements featuring its iconic child actor saying “Thank you, Mr Google”.

“No, we’re happy and she’ll continue to say ‘Thank you, Mr Hooker’,” she said.