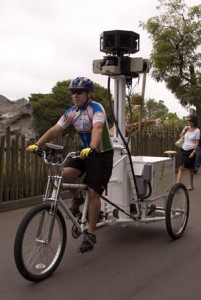 The photos are part of the search giant’s Street View function on its Google Maps product, which allows browsers to view a three dimensional combined image of a particular street or location.

“The Street View Trike is a 110kg modified bicycle that can access many places a car cannot (such as bike trails, national parks and beaches) and includes a mounted Street View camera and specially-decorated unit and GPS system,” the search giant said in a blog post announcing the iniative.

The use of the trike was demonstrated to journalists at Sydney’s Taronga Zoo. Google is also asking Australians to nominate online their favourite tricky destination for the trikes to visit and photograph. The trikes have previously been used in various international locations.

Video of the trike in action: