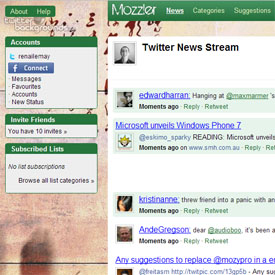 We’re a bit late this week, but usually every Monday we’ll profile an Australian startup from the technology, telecommunications or video gaming sector. Drop us a line if you would like to have your company profiled.

How many 26-year-old Australian web developers have gone through the experience of quitting their day job to found a startup building a Twitter search engine, launching it at TechCrunch’s Real-Time CrunchUp conference and speaking to venture capitalists, but then changing the direction of the technology and discovering their wife is pregnant? All in six months?

Not many. But Adelaide’s Chris Were is one.

The Adelaide-based entrepreneur in late 2009 left his job at a financial trading company and founded Mozzler, which he had been running as a side project to find the best way to search Twitter and find the best links posted to the popular social networking platform.

Were’s technology was so good he was able to take it overseas quite early — he launched an initial version of his Mozzler Twitter search engine at TechCrunch’s Real-Time CrunchUp event in the United States in November. The launch attracted interest from potential investors, and Were found himself in meetings with a number of them.

However, the entrepreneur quickly found things weren’t going to be as easy as some might expect after such a star-studded launch.

He says the investors had a “template” approach that required all startups to live in the US to develop their technology, as well as take a certain amount of funding — probably more than Were would initially have been seeking.

And another spanner was thrown in the works — Were and his wife discovered that they were expecting their first child. “I came back to Australia and tried to work out whether to move,” he said.

In the end, the entrepreneur did end up staying Australia, a move which also drove a shift in the way he was thinking about his technology. “A lot of work in that search engine space is in the US. To compete on a search engine basis you do need a lot of capital,” he says. “With that in mind I decided to re-assess what I was doing and follow combining social networks.”

The result is Mozzler today — a unified interface for browsing Twitter and Facebook, with more of a multimedia feel than the native Twitter interface offers. For example, videos and images are embedded in the stream, and it’s easy to notice and follow links recommended by other users as URLs are expanded with headlines and descriptions.

“Even users who don’t use Twitter can benefit from Mozzler. The inbuilt recommendation service will suggest Twitter lists to read based on a user’s Facebook interests,” says Were. Mozzler’s currently in invite-only beta, and Were acknowledges there are still some bugs to iron out, but the site is functional as it is.

One potential next step may be the addition of Google Buzz into the mix. The newest social network on the block only launched in the past few weeks, but Were says he would be interested in seeing what any API from the service would offer.

There are still some things that Mozzler has to work out. Take revenue. Were says he’s got three potential streams in mind. At the moment he has some basic Google Adwords running on the site. But in the longer term he sees other opportunities for revenue around contextual content. For example, if someone tweets about a song, having the option to buy that song on Amazon or iTunes.

In addition, he says, Twitter is known to be putting in place a monetisation strategy, with early signs being that the company will conduct some sort of revenue-sharing model with third-party developers. “The hints that I was getting from Twitter in the US were along those lines,” he says.

Ideally, Were would like to build a sustainable business in Australia, helping to build the local IT culture. “But realistically that’s quite difficult and so quite likely that an exit strategy would involve moving to the US, or having some good strategic relationships, and then look to sell it over there,” he says.

The entrepreneur says Australians have a good reputation in the US — he met quite a few when he was at the TechCrunch conference. “If you talk to the Americans, they say the Australians are great,” he says. “They all hang out together and are very respected.”

Were adds it’s almost as if the US gets the pick of the Australian IT entrepreneur crop. “Some of them had started big companies and sold them — three or four times,” he says. “There’s not much interest in coming back to Australia and starting the same thing here.”

But there’s a tremendous startup community building in Adelaide around initiatives such as the Startup Club Adelaide, which has attracted more than 600 local entrepreneurs to its forums. And Were notes that that there are ways to raise venture capital in Australia.

With the entrepreneur’s enthusiasm and some luck, maybe Australia will have one growing startup focused on taking advantage of the social networking phenomenon.