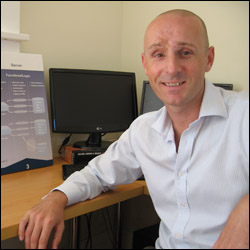 Every Monday we’ll profile an Australian startup from the technology, telecommunications or video gaming sector. Drop us a line if you would like to have your company profiled.

Matt Clarke (pictured) was working for a large financial services company which had decided to take development of a new application in-house when he first met Radek Cerny, the software engineer who would become the other half of the founding team behind Australian startup expanz.

Clarke, now expanz’s CEO, knew he had met someone special when Radek Cerny, after being hired as the project’s first developer, built the entire application by himself in six weeks flat.

“At that point Matt asked him how the hell he managed that, and from there the idea to start a business using the application platform he had built up over the last decade took shape,” the company says in a statement responding to our questions about its formation.

The key to understanding expanz’s technical foundation is contained in the programming experience.

Over many years of application development, Cerny had realised that a high proportion of development time was taken up with re-creating common functions. In response, the company says, he created an extensive class library and code palette that he used in his projects. After Microsoft released its flagship .NET platform in 2002, the developer foresaw its future growth and ported his platform over from Sun’s Java.

The platform — which launched with expanz in May 2008 — introduces what the company calls an “assembly line approach” to .NET development. Applications are simply assembled from pre-fabricated components and can be deployed on a customer’s premises or in the cloud.

Although the pair had put together a business plan to build expanz from the ground up, it was never going to be an easy process.

For example, although the company is funded with the founder’s own money and some angel capital, their business plan didn’t have much scope to make money in the first 12 to 24 months. “It was all about investing in the business,” says Clarke.

Fortunately, expanz was able to bring a foundation customer on board who paid for the company to build it an enterprise resource planning (ERP) system — knowing that it would also entail building out expanz’s wider offering.

“He was able to accept it wasn’t a finished product,” says Clarke.

Even from that point it wasn’t plain sailing. The company had challenges picking up the high-level enterprise customers it needed.

“The thing that we’ve had the biggest challenge with, is because we’re targeting the high-end customers, is the risk thing,” says Clarke. “They’ve fallen in love with the technology. But they say: ‘How do I buy the technology from a couple of guys in Manly?!'”

“They’ve fallen in love with the technology. But they say: ‘How do I buy the technology from a couple of guys in Manly?!'” — Matt Clarke

To get around this problem, expanz had to sacrifice a few things, including revenue and margin, in the short term. But in the long term, a handful of customers willing to take a risk on the firm have now morphed into converts helping to win new business.

If you were to say where expanz is right now as a company, you’d probably say it is ready to take the next step. It now has six staff, is about to launch a free community version of its platform in February, and is partnering with major global tech giants like Logica and VMWare and telco and hosting partners like MelbourneIT to gain scale.

Logica, for example, is using expanz’s platform to re-build a core system involved in the next state elections in NSW.

The company makes money in three ways — through selling platform licences, through professional and support services, and through selling software as a service subscriptions to its expanzERP platform.

But expanz is also staying true to its roots. Its staff work out of a Sydney office near Manly Beach. “RIght this moment a beautiful 2.5 foot swell is rolling outside,” says Clarke. “The nature of startups is that you have to get your hands dirty. But we’re pretty flexible about lifestyle and families.”

As with many smaller companies, for expanz’s staff it’s more about output than time spent on the job, about getting lots of stuff done rather than having staff siloed into one little area.

Ultimately the company would be happy if it was mentioned in the same sentence with other software houses with their roots Down Under, like Atlassian and Springsource, which was recently acquired by VMWare. Proving you can build a great global business from Australia.