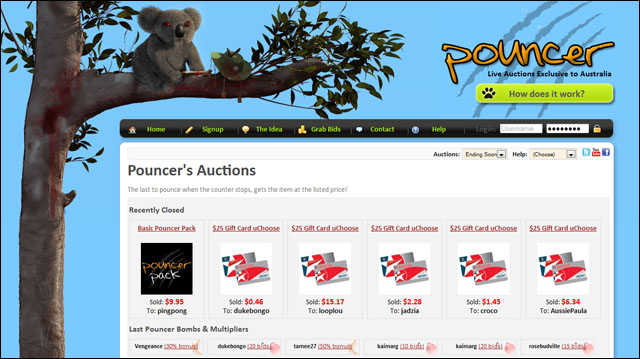 Kain Warwick, chief executive officer
Kain joined his first web startup in 1999 — Whatcard.com — a web loyalty portal. He worked there as a developer and system administrator until 2001. He has since consulted at several other startups over the years, as well as running a networking consulting business which helped consumers set up home networks, with the focus being on emerging wireless networking technologies.

Over the last five years he has focused on retail management in the Professional Audio market as well as his band The Lie Society, which he started in 2005 in Boston. The creation of Pouncer in 2009 marked both the first web startup he has founded and a return to IT industry.

Justin J. Moses, chief technical officer
Justin has been working as a software developer over the last decade. After graduating from Computer Science in 2001, and after a brief cycling trip across Australia, he worked as a freelance contractor for many years. He worked with numerous startups over this time — such as Dload in 2000, OEMSupplies in 2002 and GetOutThere in 2006.

He has moved from programming on the LAMP stack, to .NET programming and finally to RIA development in Flex, AIR and Silverlight — on which he has written professionally on the O’Reilly network. He also attained a Bachelor of Music in classical guitar and composition in 2006. Pouncer, in 2009, is the first company he has founded.

The Penny Auction concept or Beat-the-Clock as it is called in Australia, originated in Germany with a company called Swoopo (originally Telebid) in Germany, 2007. The basic idea is that users pay to bid by purchasing prepaid bid packs. Because each bid costs money, prices tend to be a lot lower, so the winner gets an incredible deal which the people who did not win help to subsidise. Everything we sell is brand new and high demand.

By late 2009, there were numerous Swoopo competitors, especially in the US, a few of which had extended their operations into Australia. We decided to create the first exclusively Australian site and called it Pouncer.

We made this decision because many of these sites use what we feel is an unscrupulous tactic of pitting users from different countries against one another without making it clear that this is going on.

Some push it even further by combining auctions for different items in different countries; a practice we feel is, even when revealed to the customer, borderline at best. Because of these practices and others many of these sites have garnered a reputation for being fraudulent and scam-like.

We knew that due to all of this bad press that Pouncer would be fighting an uphill battle to establish itself as a genuine and fair site. Which is why we decided to focus on customer retention, rather than extreme profit margins, which would inevitably lead to massive customer churn.

Australia is a small market and we knew that attempting to create Swoopo in Australia would most likely fail because customer acquisition costs would eventually skyrocket as each lost customer had to be replaced with a more expensive one on a CPA basis. We have set out to build a sustainable business that is essentially a fun and social way to shop.

The three original founders of Pouncer, Kain, Justin and Declan met in Year 11 at Waverely College in Sydney. Kain left to work in the US in 2000 while Declan and Justin were finishing degrees at UNSW. Ten years later in 2009, Kain, who lived in Boston came across Swoopo and felt like it would be a great fit for the Australian market.

Kain and Justin had been discussing founding a start-up for a while at that stage but all other plans were scraped when the Penny Auction idea came along. While Justin was surfing in Samoa, Kain booked his ticket back to Australia and to Justin’s surprise was waiting for him when he got back.

Together with Declan they formed Pouncer in May 2009. Initially, the roles were: Kain as customer service and business representative, Declan as sysadmin and backend, Justin as design and frontend development.

After a few weeks however, Declan had to leave due to the pressure of his day job. Justin and Kain divvied up his role — Justin managing all of the design and development, Kain functioning as sysadmin. Justin also continued to work full-time at another job (Flex/AIR development) until September.

The site was created by Justin, with artwork designed by Kain’s younger brother, Grant Warwick, who currently works in New Zealand with his company Engineered. It entered public beta testing from mid July through till its launch on October 12, 2009.

Penny Auction sites get a bad rap — and it’s not undeserved. On all sites we’ve seen, bids cost upwards of 50c, meaning that investing in an auction and losing can set users back a significant portion of the actual item price.

With Pouncer, the bids cost — at most — 20c, and often much less. This, and the fact that we provide many free ways for users to earn bids (Pouncer Bombs, End Price Predictor, Quizzes and Post-to-Facebook), mean that users can compete in a more fun, friendly manner.

To this end, we’ve introduced features such as Newbie auctions, Buy It Now, uChoose, Blitzes (bid limits), Votes and Pack Multipliers (bonuses on pack purchases). By allowing users to earn bids for free, we’ve basically implemented a freemium model on the site.

From the outset, we’ve been very transparent with customer service, running most of it on our Facebook Page. This is important as many of our competitors suffer from accusations of illegitimacy, something which has never been an issue for us. We leverage social media — particularly Facebook — encouraging users to post their wins and pictures of them, using social proof to demonstrate the site’s worth to their friends and followers.

Yes, the product went live on October 12, 2009. The day before the public launch we opened privately for all of our beta testers.

Our goal is that on average, each user pays around retail price for each item. We want them to enjoy their shopping experience with Pouncer, which everyone does as it is a lot more fun than driving to your nearest computer store.

Initially, the model was to supplement the low auction prices with pre-purchased bid packs. Interestingly, the very low bid cost (each user has their own bid cost based on how much they’ve spent vs their total bid credits) has led to more bids being spent on gift cards, than on the larger items. These gift cards have “Buy It Now”, allowing unsuccessful bidders to convert spent bids into a discount on the item price. Whilst eating into our profit margins somewhat, it gives users an escape clause, which we believe helps auctions run for longer, and improves customer retention.

In our attempts to improve sustainability, we introduced a new type of auction in mid December — and it is unique to Pouncer. These are Sponsored Auctions.

Sponsored Auctions are essentially a novel way for product suppliers to release a product on an actively engaged market. Unlike our traditional auctions, bids must be earned, rather than bought. These auctions are also completely free for the winning bidder. Users can RSVP up to two hours before, for an initial bid balance. At any time, users can also fill out a brief, targeted survey to further supplement their balance. As users are limited in their number of bids, it becomes a game of strategy to be the final bidder.

The supplier provides us with the auction item and promotes the auction to its users, and in turn, we provide them with the survey results, along with any of our users who opt-in to the supplier’s newsletter.

Our latest Sponsored Auction is a $250 Voucher for the online experience company RedBalloon.

A combination of self-funding and an angel investor.

It is based in Double Bay, Sydney.

Just the two –- Kain and Justin.

We are working on building our Sponsored Auctions, sourcing new and exciting suppliers who’d like to try our unique platform. We are also in the process of sourcing more funding, primarily to allow us to increase our advertising budget. Finally, we are working on the Pouncer Store, allowing users to purchase items outright by redeeming loyalty points and using our own gift cards.

We’ve been a bit busy and so have skipped quite a few Mondays, but usually every Monday we’ll profile an Australian startup from the technology, telecommunications or video gaming sector. Drop us a line if you would like to have your company profiled.