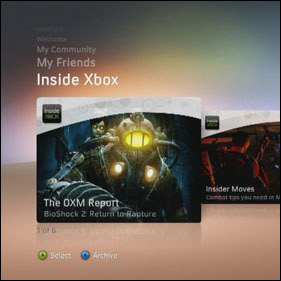 Microsoft today launched a new channel on Australian Xbox 360 consoles. Dubbed ‘Inside Xbox’, the service is described as a “free digital daily magazine service” featuring new content on the latest games, special offers and so on.

The service launched today with an Official Xbox Magazine report on BioShock 2, which is slated to launch this month, as well as reports on combat tips and an IGN special on choosing classed for the recently released game Mass Effect 2. There was also a report about a dance competition where the winning dance was re-made digitally with an Xbox 360 avatar.

According to Microsoft’s InsiderX blog, which announced the service this morning, Inside Xbox will also cover major gaming events suc has E3 and the Tokyo Game Show.

The service is only available to those who subscribe to Microsoft’s Xbox LIVE service.

According to the Inside Xbox website, the service was already available in most other westernised countries. The launch of the service is part of a trend Microsoft has exhibited of gradually launching new Xbox 360 offerings in Australia — for example, it is gradually adding new films to its movies on demand service launched in Australia in late 2009.

In some other countries such as the US, Microsoft offers a broader video on demand service through the Xbox Live platform and has done so for some time.

Also this morning, Microsoft revealed which Xbox 360 games were most played on Australian consoles in the past week, noting Mass Effect 2’s placement was impressive as it launched in the middle of the week. The top ten: