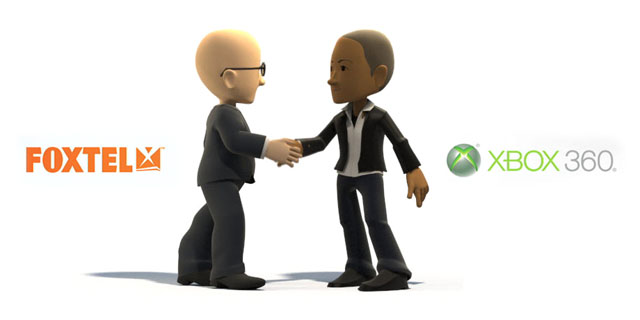 Microsoft and Foxtel today revealed that the cable television platform would be offered as a streaming and video on demand service directly through Microsoft’s Xbox 360 consoles.

The offering — to be launched “later this year” — will see Foxtel channels such as Fox Sports, Discovery, Nickelodeon, Disney and MTV directly through Microsoft’s Xbox Live platform. “A wide range” of movies and television series will also be provided in a video on demand format.

Subscribers will need both Xbox Live Gold and Foxtel by Xbox Live subscriptions to access the service.

“As we approach one million Xbox 360’s sold in Australia, we are looking forward to our customers having the opportunity to receive FOXTEL by Xbox LIVE. Last year alone, Australians spent more than 106 million hours on Xbox LIVE including gaming and social networking. With this FOXTEL partnership, there are more reasons than ever to connect your Xbox 360 to our online service,” said Microsoft’s head of Entertainment and Devices, David McLean, in a statement issued this morning.

“With at least 30 live channels and a wide suite of Video on Demand services, delivered over the internet via Xbox LIVE, no other television service comes close to this revolutionary new IP offering,” said Foxtel chief executive Kim Williams in the same statement.

The service will be launched “towards the end of the calendar year”, with further details — including packages and prices, as well as the full channel line-up — to be disclosed closer to launch date.

Microsoft already offers a movies on demand platform in Australia — to which it is gradually adding extra content. However, it is not the same service the company offers overseas. The full movies on demand service available in the US and a number of other countries is dubbed Video Store, whereas in Australia it’s a separate and more limited platform branded with Microsoft’s Zune media player.

The news comes as today Microsoft rival Sony switched on its own video on demand platform in Australia, which is provided across its PlayStation 3 and PSP devices. “A wide range of titles will be available in High Definition and Standard Definition, from all the major movie studios, with additional content being added weekly,” the company said in a statement.