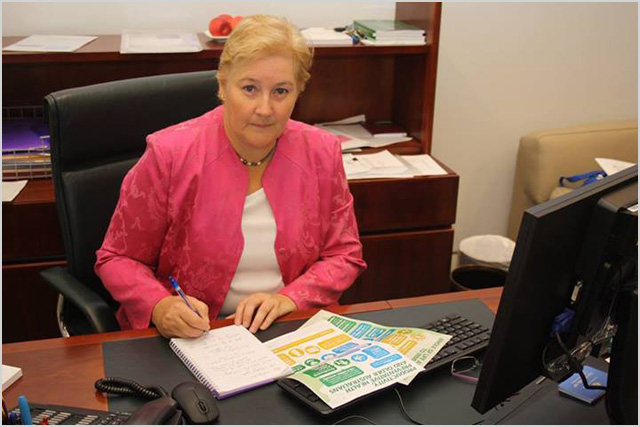 news Liberal MP Ann Sudmalis has moved a motion in the House of Representatives which appears to contain demonstrably false information about Labor’s National Broadband Network policy, in a controversial move which caused instant uproar on the part of Labor figures focused on the NBN policy.

Yesterday Liberal MP Ann Sudmalis, whose electorate of Gilmore contains the early stage NBN rollout zone of Kiama, moved in the House of Representatives that the House take note that NBN Co’s recent Strategic Review conducted under the new Coalition Government revealed that the “Government’s broadband plan can be completed using a mix of technologies to save $32 billion, keep monthly bills lower and deliver the NBN to all Australians four years sooner than under Labor’s plan”.

The motion also asked the Parliament to note that the NBN was in a fundamentally worse position than Labor ever disclosed to Parliament or the Australian public; that if Labor’s policies were left in place, Australian households could pay up to 80 per cent more for broadband each month; and that the cost of completing the NBN under Labor‟s plan has blown out to $73 billion.

It also asked the House to acknowledge that the Government was “delivering on its election commitment to complete the NBN sooner, cheaper to consumers and more affordably for the Australian taxpayer”.

The motion contains very similar language to a number of comments recently made by Communications Minister Malcolm Turnbull on the topic. However, unfortunately, it also contains several demonstrably inaccurate statements.

Furthermore, the Strategic Review also indicates that if NBN Co radically redesigned Labor’s FTTP model (for example, making greater use of overhead cabling) and an all-equity model was used to support the rollout, which the Federal Government can afford due to its extremely favourable financial situation when compared with other countries globally, the total capital investment requirement for Labor’s model would be $54 billion, just $15 billion more than the Coalition’s model. It would only take three years more.

The claim that consumer costs under Labor’s FTTP NBN policy would be 80 percent higher is also inaccurate. Current NBN costs are comparable to ADSL or HFC broadband costs, and NBN Co has committed to keeping its wholesale costs limited to the level of inflation.

Turnbull has read NBN Co’s Strategic Review, is familiar with its contents, and is aware that some of the statements which he has made with respect to Labor’s NBN policy, which were echoed by Sudmalis yesterday, are widely considered to be inaccurate. It is not clear whether Sudmalis is aware of this fact.

There is significant Parliamentary precedent for heavy sanctions to be imposed on Members of Parliament who deliberately mislead the Parliament. Such an act may lead to a Member being found in contempt of Parliament; in the past, this has led some politicians to resign from their post.

“Last year’s budget—our last budget—showed that we would allocate $30.4 billion in government equity to build the NBN,” he said. “In this budget the Liberal Party shows that it will allocate $29.5 billion. It is not a $50 billion difference; it is a $1 billion difference.”

“The Prime Minister says he is the infrastructure Prime Minister of Australia but he describes the NBN as, effectively, a video entertainment system,” the Labor MP said. “He wants to tear down this project but, at the same time, to build a paid parental leave scheme, to give $50,000 to rich mums who do not need it.”

“I make this point for this reason: the cost of the paid parental leave scheme over the next decade will be more than the cost of building the NBN over the next decade. Which one do you think will have a bigger impact on the Australian economy. I can tell you it is the NBN. The member for Gilmore should know better because in her electorate is the town of Kiama, one of the first places to get the NBN. The people in Kiama who are using it love it.”

opinion/analysis
I want to say a few things about this little sequence of events yesterday.

Firstly, it’s extremely obvious — as various Labor MPs pointed out following Sudmalis’ moving of the motion — that it was Communications Minister Malcolm Turnbull, not first-time MP Ann Sudmalis (who only took her seat in September) — who wrote this motion. Turnbull has a habit of cultivating junior MPs by getting to raise issues in his portfolio, and it seems clear that he is working with Sudmalis on this issue. Interestingly, Sudmalis is not a complete n00b when it comes to parliamentary procedure, having long worked as an advisor to her predecessor in her seat of Gilmore, Joanna Gash.

Secondly, however, it’s a little unclear why Turnbull would want this kind of motion raised in the Parliament. Not only is it clearly designed to cause a ruckus — but it gives Labor MPs such as Jason Clare, Michelle Rowland and Ed Husic a rather large platform to object to it. Of course the motion would eventually be passed due to the Coalition’s dominance of the House of Representatives, but one wonders why Turnbull wants the Parliament discussing the NBN in the first place. One rather suspects the Communications Minister would want the issue kept quiet, given how controversial the Coalition’s overhaul of it is.

Lastly, of course we’re seeing the same inaccurate statements here regarding NBN Co’s Strategic Review that we’ve been seeing from Turnbull for some time. One wonders whether Sudmalis really understands what she is speaking about here — is she aware that she has mischaracterised the findings of the NBN Co Strategic Review to the House of Representatives? Has the new MP, who has shown little interest in the NBN previously, even fully read the document?