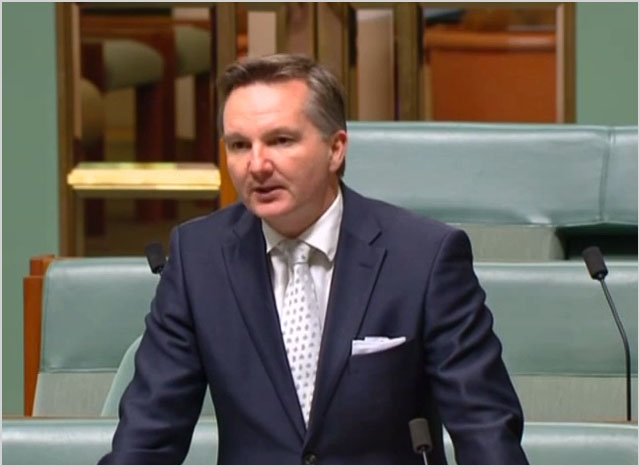 news Shadow Treasurer Chris Bowen has given a landmark speech in which he argues that much of the future for Australia’s economy lies in high-tech jobs, innovation and entrepreneurship, in sentiments which run directly contrary to the thrust of the Coalition Government’s first budget.

In this year’s Federal Budget, the Government made good on the threat delivered by its Commission of Audit to “abolish” key early stage innovation industry support vehicles Commercialisation Australia and the Innovation Investment Fund (IIF), with the pair and others to be rolled into a new body dubbed the ‘Entrepreneurs’ Infrastructure Programme’.

The moves have been widely criticised by industry groups such as StartupAUS, the Australian Private Equity & Venture Capital Association and the Game Developers’ Association of Australia.

In a major speech to the National Press Club in Canberra yesterday, Shadow Treasurer Chris Bowen said the cuts represented “particularly short-sighted policy” that had “not yet received much public attention”. The full speech is available online in Word format.

“In an attempt to bolster his right-wing credentials with the more extremist elements of his party-room, the Treasurer has felt obliged to follow up his “age of entitlement” rhetoric with a counter-productive assault on government programs that encourage innovation, venture capital, commercialisation and start-ups,” Bowen said.

“Ultimately, the best way to return the budget to surplus is economic growth. Growth through new jobs for the future, through innovation, through science and entrepreneurship. Together with the cynical decisions to make university degrees more expensive and saddling aspiring students with more and more debt, the government has chosen to undermine innovation and research and development.”

Bowen pointed out that groups as diverse as the CSIRO, Commercialisation Australia, Enterprise Solutions, the Innovation Investment Fund, Industry Innovation Councils, Enterprise Connect and Industry Innovation Precincts had all received funding cuts or been abolished in the budget. He added that funding for Cooperative Research Centres had also been slashed and the Research and Development Tax Concession had been watered down.

“A Government truly concerned about creating jobs, about diversifying the economy and about generating new opportunities for those affected by the decline in mining construction as well as the pressures of manufacturing would be embracing the need for innovation, for high technology jobs, for venture capital and the need to encourage start-ups,” Bowen said.

“It would be disappointing if the Budget did nothing to encourage this; it is devastating that it actually takes our national policy backwards. An ideologically driven assault on government programs to foster entrepreneurism and innovation makes no sense.”

“The potential here is big and real. It is not about a few jobs for graduates in t-shirts who happen to fall upon a good idea and strike it rich. It is about creating jobs for hundreds of thousands of Australians that are not vulnerable to being outsourced to other countries or subject to a race to the bottom in wages.”

“The pay-offs for our economy of relatively small government investment of money are, potentially very substantial. In his excellent book “The New Geography of Jobs”, Professor of Economics at Berkeley University, Enrico Moretti, found that for each new job in the high-technology sector, five more jobs are created elsewhere. The ramifications of this are very important. If we get more venture capital, more start-ups, more jobs of the new economy, then the main impact will be jobs for all, spread right through the economy for those many of us who would no more know how to write a piece of software or create a new app than would know how to engage in brain surgery.”

“Australia does not need a carbon copy of Silicon Valley, but we can find our own niche, our way to create thousands of good, well-paying jobs. We can do much, much better.”

Bowen also highlighted the fact that the growing area of crowdsourced funding was still regarded as illegal in Australia due to the lack of regulatory change in the area, and that other aids to the technology sector — such as a potential Entrepreneurs’ Visa, which would allow overseas entrepreneurs to set up shop in Australia — had not been establishd.

“Australia has plenty of entrepreneurially minded people,” the Shadow Treasurer said. “Unfortunately, too many feel the need to move to Silicon Valley or elsewhere to find a culture and environment more welcoming of start-up companies. But we should not only encourage Australians to start innovative companies here, but also invite entrepreneurs from around the world to come and create jobs here.”

Ultimately, Bowen said that if the Coalition was “determined to remove support” from the high-tech/startup sector, then Labor would be willing to lead the debate in this arae.

Opposition Leader Bill Shorten, Bowen said, had made it clear that science would be “front and centre” of Labor’s agenda in Government, taking personal responsibility for the portfolio. In addition, Bowen said, Shorten and he had asked Bowen’s Parliamentary Secretary Ed Husic, “who has a passionate interest in the potential of high technology” to consult with the technology sector on potential legislative remedies for some of the issues he raised in his speech.

opinion/analysis
Wow. Simply wow. Amazing speech from Chris Bowen. I recommend you read it in its entirety (Word doc).

With the exception of a few politicians such as Kate Lundy, Ed Husic and Stephen Conroy, we tend to hear very little about the technology sector from our nation’s political leaders, especially on issues which are so important for the technology startup sector but which receive so little media attention, such as the Employee Share Option Plan which both sides of politics have acknowledged is an issue but which neither has done anything about.

To hear Bowen speaking about these kinds of issues in public is almost like hearing someone talk about a taboo subject. All we tend to hear from our politicians generally is “mining, mining, mining, farming, manufacturing and a little retail”. To hear someone senior finally acknowledge that the technology and knowledge industries which employ (at a rough guess) somewhere north of half a million Australians are important is a little … stunning.

Reading between the lines here a little, it’s obvious that much of the impetus for this speech comes from Husic himself, who has demonstrated an enduring passion for technology issues. Shorten personally doesn’t appear to be aware the tech sector even exists (having avoided the topic of the NBN almost perfectly for the past six months), while Bowen has never demonstrated much interest in it.

Husic, with his peerless behind the scenes networking and relationship-building ability and knowledge of the tech sector (both rooted in his history as a key union official for Telstra’s main union), as well as his personal interest in these issues, has successfully gotten these important technology topics onto the main political stage.

Regular readers will be aware that I haven’t personally been against many of the cuts which the Coalition made in the budget to programs which were supporting the technology sector. This isn’t because I don’t think the technology sector is worthy of support — it’s more that I think the programs that were cut, such as Commercialisation Australia, the IIF and the Interactive Games Fund — were largely ineffective in their roles. I would much rather see comprehensive tax reform targeted at the entire technology and knowledge work sectors, rather than these kind of direct intervention programs.

However, it’s still fantastic to see Bowen at least discussing the issues in public. At the very least, it gives me hope that we can, after all, have a national conversation about innovation. And that would be a very, very valuable thing.