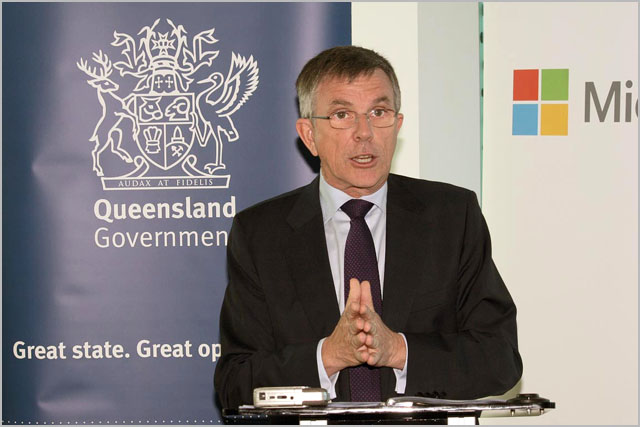 news The Queensland State Government yesterday announced it had signed a $26.5 million deal with Microsoft which will gain the state access to Microsoft’s Office 365 software and services platform. However, with the deal not covering operating system licences and not being mandatory for departments and agencies, it remains unclear what its impact will be.

Queensland IT Minister Ian Walker (pictured) announced the three-year deal in a statement yesterday, claiming that it would save $13.7 million in IT expenses for the State Government.

“Not only are we saving the taxpayers of Queensland millions of dollars, it’s another positive step towards simplifying IT services across government,” Walker said. “Under the previous government, government IT services were cumbersome and delivered little value-for-money. This is the first whole-of-government contract in Australia to provide the flexibility to move between computer and cloud-based software, making the Queensland Government leaders in this area.”

“This new contract means that for the first time all government departments will have access to the same technologies, allowing for greater sharing and collaboration. Access to the most up-to-date IT services and world class innovations will further boost the services Queenslanders receive and help reach our goal of having the best public service in Australia. We are moving from a government owned and operated model to one that uses world-class solutions to deliver flexibility that drive innovation and transformation.”

“This is a great example of the government continuing to lower costs through effective partnering with non-government and industry providers. It will improve the government’s capabilities for us to engage with Queenslanders in new and innovative channels and offer more opportunities to local business and industry.”

However, Walker’s statement did not include details on what the contract actually covered. Delimiter is seeking further information from the Queensland Government on the deal.

Further information about the deal was published on Microsoft’s Australian blog by the company’s Queensland state director Sharon Schoenborn. Schoenborn billed the arrangement as a landmark deal which would bring Microsoft’s software and services platform Office 365 (which includes both services such as cloud email as well as access to desktop software and software delivered as a service through a web browser) to some 149,000 Queensland Government employees.

“Using Office 365 means that the government will have always up-to-date IT services, with access to the best and latest cloud technologies from Microsoft,” wrote Schoenborn. “It will help drive improvements to the Queensland Government’s digital environment and provide greater capabilities for the Government to engage with Queenslanders in new and innovative channels so it can service its constituents more effectively.”

“Office 365 will also underpin better workforce flexibility, mobility and collaboration, and facilitate creative approaches to problem solving. It will also provide a foundation for standardisation and simplification: All employees will have access to the same capabilities and tools, which means information can be exchanged more easily.”

“More broadly, this new partnership with the Queensland Government has the potential to transform the State’s digital ecosystem through local industry participation and enable the Government to become a leader in the innovation space.”

The Queensland Government is currently facing two major headaches with respect to Microsoft software. Firstly, it was reported in July 2012 that the Government could not afford the approximately $100 million it would require the state to upgrade its desktop PC fleet from Windows XP, which is no longer formally supported by Microsoft. And secondly, the state is also grappling with the need for a whole of government email platform, after a previous initiative in this area failed.

iTNews reported yesterday that the new deal with Microsoft would allow all of the state’s departments and agencies access to Office 365, but quoted Walker as stated that use of the platform would not be mandatory. The site also reported the deal would not include operating system licences.

Among the state’s many problems (outlined in detail in its recent ICT Audit) are two which are quite relevant to this contract. The first is that the state’s email infrastructure is in dire need of an upgrade. The state needs to migrate off legacy platforms and onto modern infrastructure in the form of Microsoft Exchange, Office 365 or Gmail. This is a matter of urgency for Queensland, and it’s already failed in a previous attempt to do this. Secondly, there is the vast number of Windows XP desktops in the state government, which should now be considered deprecated and unsupported.

To be blatantly honest, this deal signed this week with Microsoft appears to solve neither of these two problems.

It’s all well and good for Walker to pontificate about every Queensland Government department having access to the same technologies. But the reality is that it will be an extremely slow process for those agencies to migrate onto the email aspect of Microsoft’s Office 365 platform, and one which will require substantial integration work. These projects are never easy or quick and I don’t see the Minister discussing handing departments any extra resources to hire partners to integrate Microsoft’s platform.

Walker has also thrown a spanner in the works by not mandating that departments and agencies take up the offering. This lack of ‘bite’ in the deal will no doubt mean that many smaller agencies, which may not have the resources of larger ones, will simply ignore the offering and continue on their merry way with their existing outdated infrastructure. Microsoft can state that 149,000 Queensland public servants will have access to Office 365, but I doubt that number will be reached any time soon.

And of course, there is also the bigger problem of operating system licences. Most IT managers and chief information officers know that it’s not normal to sign deals with Microsoft for just one component of its stack. It’s much more common — in fact, bog standard normal — for organisations to sign one overarching Enterprise Agreement with Redmond, which then covers everything from operating system licences to server software to services and desktop software. Microsoft also likes to throw in a couple of kitchen sinks along the way.

This week’s Office 365 deal with Microsoft looks like an acknowledgement that the Queensland Government actually can’t afford to sign a bigger deal with Microsoft along these lines right now to handle its broader problems — or at least that Walker doesn’t have the political capital to get such a deal across the line. It appears the Minister is trying to carve off a chunk of the Microsoft services the state really requires, trying to slip in adoption of next-generation software and services to agencies without explicitly forcing them to adopt the new technology or paying (yet) for the whole slab which Queensland needs.

This isn’t a bad approach, and it’ll probably work to a certain extent. I anticipate that Walker’s move will have the effect of pollenizing Office 365 into a few departments and agencies. Hopefully the software and services will spread more widely.

However, it also doesn’t substantially address Queensland’s major problems. And this is a very serious problem. In early June, the state’s long-awaited comprehensive audit of its ICT systems and processes found that ninety percent of the Queensland Government’s ICT systems were outdated and would require replacement within five years at a total cost of $7.4 billion, as Queensland continues to grapple with the catastrophic outcome of years of “chronic underfunding” into its dilapidated ICT infrastructure.

A $26.5 million Office 365 deal with Microsoft is an OK step forward to starting to deal with that larger problem. But it’s still a “minimal effort” approach, at a time when Queensland requires much, much more.