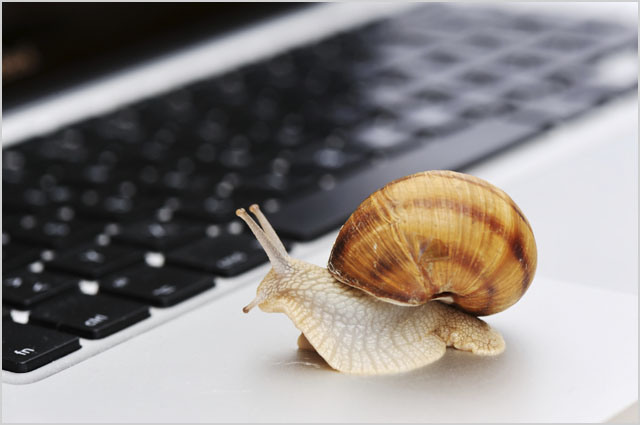 news NBN Co’s latest set of quarterly rollout figures show the company’s rollout progress remains extremely slow across Australia in general and has actually gone backward slightly in the state of Tasmania, as evidence continues to pile up that the company is not capable of delivering on Labor’s Fibre to the Premises-based NBN vision in a timely manner.

According to figures released by NBN Co in July, at the end of June the company had passed some 207,500 premises with its fibre network, including both brownfields (areas where there are existing telecommunications networks) and greenfields estates (where there are none). At that stage, the company also had some 27,300 premises passed with its fixed wireless network.

NBN Co has repeatedly stated this year that its network construction rollout would shortly enter a rapid ramp-up phase which would see the company speed up its fibre rollout to target hundreds of thousands more premises. For example, a leaked draft of its corporate plan, developed in June, stated that it planned that its fibre network would reach some 981,000 premises by the end of June 2014.

However, according to internal NBN figures obtained by Delimiter, and first reported this morning by the Financial Review newspaper, NBN Co has added on only 83,700-odd fibre premises in the three months since June, and just 18,000-odd fixed wireless premises. The company’s latest figures show the following: 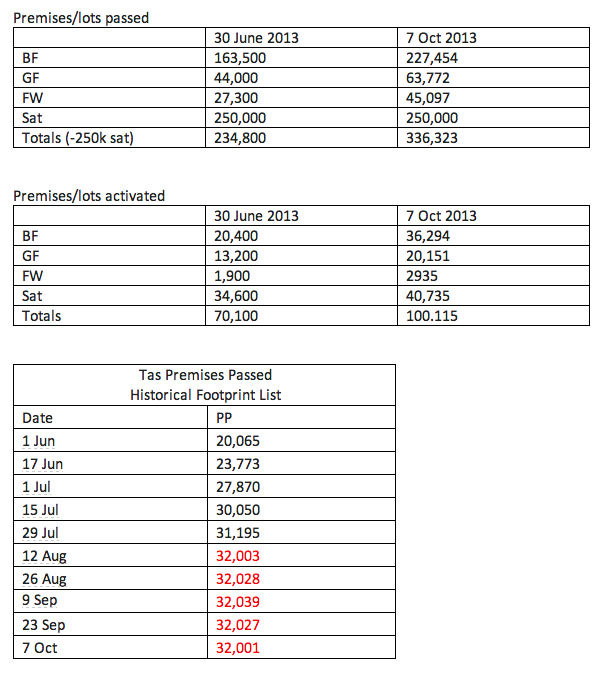 Of particular note is the company’s Tasmanian operations, which have actually gone backwards slightly over the past several months. As at 12 August, NBN Co’s fibre network was listed as having passed some 32,003 premises in the state. However, by 7 October, the figures had gone down slightly for Tasmania, to just 32,001.

The news comes just a week after Communications Minister Malcolm Turnbull described the National Broadband Network rollout in Tasmania as being “dead in the water”, with no progress in the state having been made “for months”, in the context of calls from activists in the state for the Fibre to the Premises rollout promised under Labor to be completed.

In a new interview with ABC local radio in Hobart at the time, Turnbull said with regard to Tasmanian NBN contractor Visionstream: “As far as we can see no work has been done by Visionstream for at least two months and they’ve basically downed tools … “It’s been dead in the water as far as progress is concerned in Tasmania for months.” The ABC subsequently reported, with regard to Turnbull’s comments:

“Mr Turnbull’s claims that no work has taken place in Tasmania in the last two months regarding the rollout of the fibre optic cable was instantly challenged by listeners to ABC Local Radio by text and on Twitter, as reports came in o people seeing Visionstream workers working in Kingston, Launceston and Beaconsfield in the last week.”

In addition, David Havyatt, a former senior telecommunications executive and senior advisor to Labor Communications Ministers Stephen Conroy and Anthony Albanese, posted an entry on his blog denying the claims that work had stopped in Tasmania.

It appears that some NBN construction work is still continuing in Tasmania, based on photographic evidence posted by Tasmanians of the rollout. However, it also appears Turnbull is correct, in that there appears to have been very little finalised progress on new connections made in Tasmania over the past several months.

opinion/analysis
My broad thoughts on this issue are contained in an opinion/analysis piece I published today on Delimiter 2.0 (subscriber content), entitled It’s official: Labor’s NBN project has failed. A sample paragraph:

“The National Broadband Network project has abjectly failed every construction target ever set for it, its rollout has slowed to a deadly slow crawl, and even its founder, former Communications Minister Stephen Conroy, has admitted the previous Labor Government drastically underestimated the amount of work involved in delivering it. It’s time to admit NBN version 2.0 is dead and that the project desperately needs to be radically reshaped yet again.”