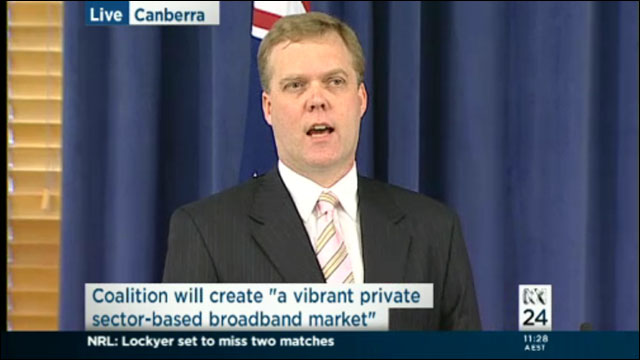 The Coalition this afternoon unveiled its $6 billion rival broadband policy to Labor’s National Broadband Network project, with the central planks being a competitive backhaul network, regional and metropolitan wireless networks and an ADSL enrichment program that will target telephone exchanges without ADSL2+ broadband.

Robb said the Coalition’s policy aimed to cover 97 percent of Australian homes, with speeds of between 30Mbps and 100Mbps and satellite for the remaining 3 percent. In the press conference, both Robb and Smith emphasised the ability of the competitive telecommunications market to solve the national broadband debate — with Government to step in to provide services where it was not economical for the private sector to do so.

They emphasised the fact that both Optus and Telstra are offering speeds of above 80Mbps in some areas using their HFC cable broadband networks.

Slamming Labor
Robb claimed Labor had already wasted three to four years with its NBN policy and said the Opposition’s policy would deliver the same speeds as Labor’s fibre rollout could — but without “betting the house on a single technology” — fibre to the home — and without “wasting tens and tens of billions of dollars”.

“The private sector is quite capable of identifying where there is a demand for fibre to the home,” he added, referring to Telstra’s recent decision to roll out fibre in the South Brisbane area.

The Finance Spokesperson also pilloried Labor’s National Broadband Network Company, describing it as “a bureaucratic, stodgy, cumbersome and unresponsive govt monopoly” that was ironically operating in the most innovative industry sector — technology.

Journalists at the press conference did not go easy on the Coalition pair. At times, the questions turned almost hostile, causing Smith — who appeared tired after weeks on the campaign trail to visibly lose his temper at several points. “How many households will get 100Mbps? Is it that you don’t know?” asked one journalist.

“You can’t just walk out of here and start digging a trench,” Smith answered at one point in relation to the Coalition’s lack of network maps for its policy. “NBN Co already has its tractors out there digging trenches,” the questioning journalist fired back.

Another pointed out the Coalition’s biggest ticket item in its policy — its backhaul plank — would not be delivered until 2017 — by which point most of Labor’s NBN policy is scheduled to have been delivered.

Image credit: Screenshot of ABC News 24 live coverage this morning, believed to be OK to use under fair use