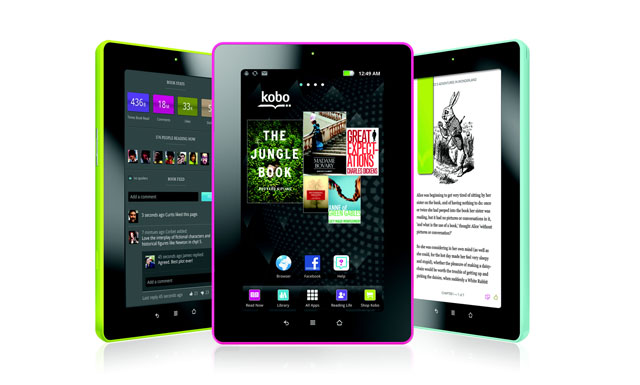 review Kobo isn’t as well-known a brand as Apple, Google or Amazon, but it’s still become a household name in the publishing industry for its line-up of eBook readers and its extensive catalogue. But can one of the company’s first efforts in the tablet market, the Vox, play with the big boys?

Design
At first glance, Kobo’s Vox eReader appears similar to a number of other major tablets on the market. With a 7” colour touchscreen surrounded by black plastic and a leathery back, the Vox appears superficially similar to the Kindle Fire line, Google’s Nexus 7 and even 7” tablet models from Samsung and Research in Motion.

On the left-hand side of the Vox sits a volume rocker and its MicroSD card expansion slot, on the top a small power button and in-built speaker, while the bottom holds the MicroUSB output socket which is used for both connecting the Vox to a PC as well as charging. Alongside that sits a standard 3.5mm headphone jack. Below the touchscreen sit three fairly standard Android buttons – return, menu and home.

There are two overwhelming impressions which you will no doubt walk away with after playing with the Vox: It’s thickness and its weight. At 13.4 mm thick, although the Vox is only 3mm thicker than the Google Nexus 7, the Vox feels like one of the thickest eReaders we’ve used over the years. It’s got that chunky feel which we used to associate with scientific calculators when we were in high school – it’s less a sexy consumer gadget and more a blocky traditional home appliance. It’s not easy to hold in the hand unless you have quite large hands.

Similarly, the weight of the Vox is definitely a problem. At 402.6g, the Vox is actually slightly lighter than the Kindle Fire at 413g, and the PlayBook at 425g. And it’s quite a bit lighter than the iPad, which is lightest in the iPad 2 model, starting at 601g. But in practice, due to its blockiness and thickness, the Vox feels heavier and less comfortable in the hand, perhaps because we’ve been fondling the Nexus 7 recently, which is a similar size, but thinner and substantially lighter at 340g.

Would we be comfortable sitting in bed, in a chair or on the bus reading an eBook on the bus in one hand? Not really, to be honest. It’s just too heavy and too unwieldy. This 7” form factor is designed to be used in one hand, as opposed to the iPad, which is normally a two-handed job, or a one-handed job resting on a comfortable surface. But the Kobo Vox feels like a two-handed model, and that’s not an idea outcome.

Features
The Vox has a fairly standard features list for a 7″ tablet, although it can be a bit underpowered at times. It’s powered by an 800MHz CPU and comes with 512MB of memory, and although it runs a custom Android skin, underneath it’s Android 2.3 (‘Gingerbread’), meaning you can add extra Android apps to it and use standard non-eBook apps such as web browsing. It comes in ‘hot pink’, ‘lime green’, ‘ice blue’ and ‘jet black’ (we reviewed the black model) and its display is a 7” model running at a resolution of 1024×600 pixels.

A built-in speaker provides modest audio support, and connectivity options include 802.11b, g and n Wi-Fi alongside a microUSB port. Its battery life is rated at seven hours, and the Vox comes with 8GB of internal storage (more than enough for an eReader), plus a microSD card option that can add a further 32GB of space.

The Vox can take the standard ePUB eBook format, and can also display the normal range of multimedia content, ranging from JPG, PNG and GIF riles to MP3 and AAC audio files, and MP4 video. Kobo says it has more than 2.5 million books, newspapers and magazines in its library available to users, but in our experience, not all of those will be available to Australians due to geographic licensing restrictions.

Performance
There were two major factors we were concerned about with respect to the Kobo Vox – and in our view they’re both deal breakers.

We’ve talked previously in this review about the Kobo Vox’s weight. We have no idea why you would buy the Vox as an eReader or Android tablet when you have the Google Nexus 7 on offer, in a lighter and thinner form factor. Possibly, as it launched in 2011, the Vox is going a bit cheaper at this point, especially if you pick up one second-hand through an outlet such as eBay. But that doesn’t change the fact that the hardware on this model is not up to scratch. The Vox does not feel comfortable in the hand – it feels bulky and weighty, which is not what you want from a device primarily designed as a window into electronic content.

Secondly, there is the Vox’s poor software performance.

Navigating around the Vox can be quite speedy at times. It can function as you expect, with menus loading speedily and content opening quickly. But we wouldn’t say that this is the norm. If you’re going to buy this device, you had better get used to delays. Delays as the device switches on. Delays as you navigate around its user interface and find books. Delays as you wait to see if it has recognized a button press. Delays as it loads content – even a basic text book.

I’m not sure whether the Vox has an underpowered processor for its functions, whether its software is poorly optimized, or whether its touchscreen is just not that sensitive, but it’s can just be a pain to use at times. When you’ve opened some content – we trialled the Kobo with David Marr’s Quarterly Essay on Tony Abbott – page-turning tends to be fairly crisp, and we were satisfied with it, but navigating back to other content was a bit slow.

Several years ago, this wouldn’t have necessarily been a problem – it would have been more or less standard for the industry. But in mid-2012, following the release of the silky smooth Google Nexus 7, and in the context of ongoing releases of new iPads and Kindle devices, it’s very hard not to criticize Kobo for this effort.

Battery life is theoretically rated at 7 hours for the Vox. In practice, expect a bit less than this if you are constantly playing video content. For simple eReading the Vox’s battery life is pretty solid. One good aspect of the device is that it seemed to recharge pretty quickly – we got most of the battery recharged in about 45 minutes on our desk, which we thought was pretty good for this class of device. One final note: Don’t expect much from the Vox’s in-built speaker. It’s essentially bare minimum in terms of a speaker for this class of device – not very loud, with not much bass, and it all seems to come just from one direction in the top right corner of the device.

To sum up: the Vox does perform its functions as an eReader and tablet. But it tends to perform those functions slowly, more often than not. This may not in itself be a bad thing, depending on what kind of user you are — but we’re willing to bet that most consumers will find this kind of sluggishness at least a little annoying. The good news is that the Vox does eventually get there. Unlike some devices we’ve reviewed over the years, it does do what you expect it to, eventually.

Conclusion
The Kobo Vox does do what it says on the box – it’s an eReader with a LCD touchscreen that allows you to use tablet functions from the Android universe. But it’s not a very good example of this breed of device, and we can’t recommend that you purchase it. It’s too heavy for its size, it’s too bulky for its class, and its user interface and touchscreen aren’t responsive enough. More than anything, the Vox feels like it’s out of date. Back in 2009 or perhaps even 2010, this would have been a flagship device. But in mid-2012, it feels like a dinosaur, and it doesn’t come close to measuring up to a rival such as Google’s Nexus 7 device, which is the best device in the 7″ tablet class at the moment.

If you could pick up a Kobo Vox for less than $100, and if you were buying one for an older relative who wouldn’t mind the slow nature of its user interface, then the Vox could still be OK. But we know quite a few older Australians who are more than happy with their existing e-ink Kindles, and the Vox is not a persuasive enough argument to jump to a different eBook ecosystem.

Other reviews of the Kobo Vox we liked: CNET Australia, The Verge, Engadget.