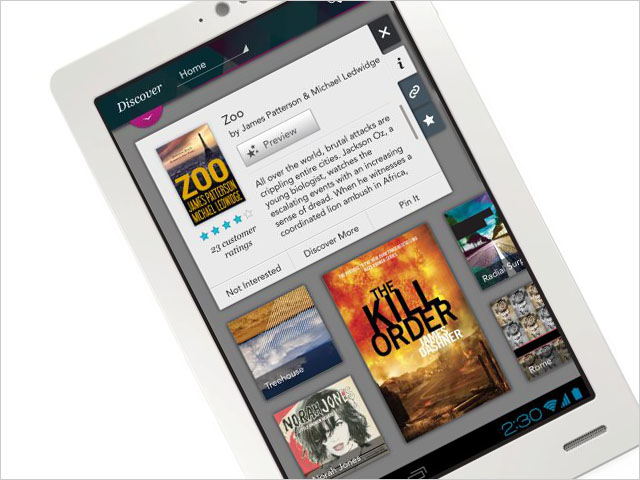 review Kobo’s new Arc e-reader is more than just an e-reader. Like Amazon’s Kindle Fire unit, it’s actually fundamentally a LCD-touchscreen Android tablet with Kobo’s own special sauce added on top. But does Kobo do enough here to differentiate the Arc from the crowd of other Android offerings on the market? Read on to find out.

Design
If you’ve played with Kobo’s recent line-up of e-readers, you’ll find a lot that’s familiar in the Arc’s overall design. The unit is composed of hard white or black plastic around its edges, with a leathery/soft plastic feel on its back which you can get in various colours. All of this surrounds a pretty standard 7″ touchscreen colour display. There’s a front-facing camera above the screen and a couple of speakers below. On the bottom there’s a micro-USB port for charging, and you also get a volume rocker, power button and 3.5mm headphone jack. It’s all pretty standard for a Kobo unit.

Kobo Arc is comparable physically to other 7″ Android tablets on the market. For example, Google’s Nexus 7 unit, which we consider to be the flagship in its form factor at the moment, measures 198.5 by 120mm, and it’s 10.45mm thick and weighs 340g. The Arc is pretty similar — it comes in at 189 by 120mm, and it’s 11.5mm thick, with a weight of 364g. However, Apple’s iPad mini tablet is both substantially lighter, at 308g, than either the Arc or the Nexus 7, and it’s also substantially thinner, at 7.2mm.

The overall impression you get from the Arc when you hold it in your hand is that there’s nothing from with the unit — it is quite comfortable and about the right weight. There’s good build quality here, and the materials are good ones.

However, you’ll also probably walk away from your experience with the Arc thinking that it doesn’t feel like a high-end model such as the Nexus 7 or iPad mini. There’s nothing particularly special about the unit’s construction, and it’s not an eye-catcher. Its design does its job, but it doesn’t stand out in any way.

Features
The Arc also has a very strong list of features. At it’s heart, the unit comes with a 1.5GHz dual-core processor, with dual-core graphics and 1GB of RAM. The front-facing camera shoots 720p HD video with a resolution of 1.3 megapixels, and the display is a 1280×800 resolution model, with a pixel per inch rating of 215, the same as the Nexus 7 and better than the iPad mini at 163ppi. The unit comes in 16GB, 32GB and 64GB models, and Kobo boasts that its battery allows for 10 hours of reading and 2 hours standby. And of course there’s the normal Wi-Fi options. All of this is quite standard for a modern Android tablet.

Of course, if you believe the Kobo mantra about the Arc, it isn’t really an Android tablet like other Android tablets. Although Android is its base — and although it shipped with the older version 4.0 of Android, Kobo has already introduced a Jelly Bean update — the real hero feature found on the Arc is the way Kobo, like Amazon did with the Kindle Fire before it, has put its content front and centre on the unit.

If you open other Android tablets such as the Nexus 7, what you’ll find is that they allow the user to focus on whatever application — email, web browsing, games etc — that they want to, like a desktop operating system.

However, right up-front, when you start using the Kobo Arc, you’ll find yourself encouraged to use the device to consume content from Kobo’s library — books, movies, comics, and so on. Kobo has introduced a new feature called ‘Tapestries’, which brings all of your content to the front of the Arc experience, on its home screen. This software will also intelligently ascertain what forms of content you’re likely to be interested in and suggest similar content. As with the Kindle Fire, managing and buying new content is the real focus of the Arc.

It’s also important here to mention the broader Kobo ecosystem. As with Amazon’s Kindle platform, if you buy eBooks or other content through Kobo, you’re not just buying them to use on one device. You can port them between devices or even read them on your PC, smartphone or third-party tablet through Kobo’s applications. This makes Kobo more than just a gadget company – it’s a whole platform, and the Kobo devices mentioned here are just one window into that platform. We easily downloaded some of our existing Kobo purchases onto the Arc.

So is the Arc missing anything in terms of its features? Not particularly that we could find, although a high-quality back-facing camera is always useful on such devices, and we’ve certainly found such a feature very useful on our iPad mini for taking family videos and happy snaps. In addition, a really long-lasting battery would have been useful on the Kobo Arc, given how much reading people tend to do on their e-readers these days.

Performance
There are two key aspects to the Arc’s performance which you’ll need to consider if you’re thinking of buying one of these units.

Firstly, the unit does pretty much what Kobo says it will do (this isn’t always true for gadget manufacturers). It is a very good device for consuming content; its screen is bright with vivid colours, it fits in the hand nicely, Tapestries is actually a pretty good software tool for finding new content and managing existing content, and of course you also get access to the full Android experience when you want it, including the Google Play store — something that’s not true on the Kindle Fire, for example.

We enjoyed reading books, watching movies and conducting other tasks such as responding to email and web browsing on the Kobo Arc. It’s a competent device and we have no hesitation recommending it for these purposes.

However — and this is where the kicker comes in — it’s not the best device in its class for doing any of these things.

Over the past several months at Delimiter we’ve reviewed both Apple’s iPad mini and Google’s Nexus 7 unit, and the sad fact for Kobo is that both are fundamentally better units at the task of being 7″ tablets than the Arc is, with content offerings which are at least as wide.

When it comes to the basic operating system user interface and the intregration of apps, the Nexus 7 and the iPad mini are at the top of their class. These two units do UI integration very, very well, and we love using them from a day to day basis. The Arc, in comparison, is hamstrung by the fact that it’s trying to be an e-reader first and a multi-functional tablet second. When you want to get to your email and apps, they are there on the Arc, but they’re very much a secondary consideration.

When it comes to content, given the fact that the dominant Amazon Kindle ecosystem is already available on all three platforms, in addition to vendor-specific platforms such as Apple’s iTunes store and Google Play (Play is available on both the Nexus 7 and the Arc), there’s really no reason to specifically buy the Arc for access to Kobo’s ecosystem. If you’re going to invest in an eBook ecosystem over the long term, you probably want to invest in Amazon’s. It’s the one which is going to be around for the longest, and it’s currently the best.

Kobo’s platform represents a very decent second-best option, but this still doesn’t make the Arc worth buying specifically for this feature. The Kobo app itself, like the Kindle App, is also available on iOS and Android — meaning you can also access your Kobo content on non-Kobo devices.

When you bundle these facts together with the reality that the Arc also doesn’t have the awesome high-end physical design credentials of the Nexus 7 or iPad mini, you’re left wondering what competitive advantage the Arc has in the market. Kobo lists a number of features on its site — such as the ability to survive a drop from 1.5m, its varying storage options, its faster processor and the fact that it doesn’t bundle ads with its platform (unlike Amazon) as advantages. However, to our mind, these advantages aren’t truly persuasive in trying to get customers to buy an Arc over a competing tablet.

Conclusion
The Arc is a very solid Android tablet, which we liked using. Kobo’s done a really good job with this one, and the Arc performs very well relative to the promises which the manufacturer makes about it.

However, fundamentally, we can’t help but feel that in today’s tablet market, unless you want a dedicated e-ink unit (which we actually recommend for e-reading, as it reduces eye strain over the long-term), e-reading is more of an app rather than a physical device. When market-leading tablets such as the iPad mini and Nexus 7 already exist and offer access to the same content as the Arc (even from Kobo’s own app), there really is little reason specifically to buy the Kobo unit and compromise on physical build quality and software performance.

The Kobo Arc is a very good unit, but it’s unfortunately outshone by the stellar rivals in this fast-moving tablet market, and we consequently can’t recommend it as an outright purchase at this time.