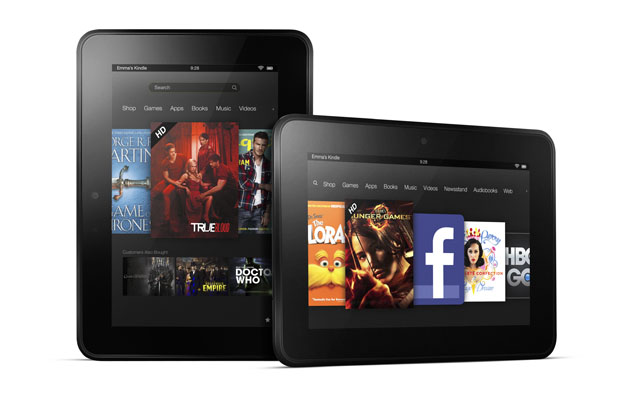 news For the second year in a row, Amazon has decided not to launch the majority of its new Kindle tablet and e-reader devices in Australia, in a move which appears set to diminish the local popularity of the devices.

The original 7” Kindle Fire, which went on sale in the US last year, has received a revamp, with a faster processor which Amazon says will deliver 40 percent faster performance, twice the memory and longer battery life. It will sell for US$159. That Kindle Fire will be complemented by three new Kindle Fire HD models. The first also features a 7” screen size, but comes with a much higher resolution than the lesser Kindle Fire, at 1280x 800, and 16GB of storage. It will sell for US$199.

“We’re taking on the most popular price point for a tablet, $499, but doubling the storage and incredibly, adding ultra-fast 4G LTE wireless,” said Jeff Bezos, Amazon.com Founder and CEO. “Kindle Fire HD is not only the most-advanced hardware, it’s also a service. When combined with our enormous content ecosystem, unmatched cross-platform interoperability and standard-setting customer service, we hope people will agree that Kindle Fire HD is the best high-end tablet anywhere, at any price.”

Amazon is also introducing two new low-end Kindles – the first of which, the Kindle Paperwhite, it describes as “the most advanced e-reader ever constructed”. “Paperwhite is the Kindle we’ve always wanted to build — the technology didn’t exist to build a display with this level of contrast, resolution, brightness and battery life, so our engineers invented it,” said Bezos. “62% more pixels, 25% higher contrast, built-in front light, perfect for bed, perfect for beach, even thinner, 8 weeks of battery life — this is a quantum leap forward and the best Kindle we’ve ever built by far.”

A Wi-Fi version of the Paperwhite will sell for US$119, while a version with 3G mobile broadband included will go for US$179, and Amazon has also introduced a new low-end version of its Kindle e-reader series for US$69. All of its new models will be supported through ads displayed on the devices.

However, mimicking its behaviour 12 months ago, Amazon has not made its new Kindle models, apart from the lowest-end Kindle model, which will sell internationally, available to customers outside the US, including Australians. As with the company’s previous Kindle Fire line (and several of its other high-end Kindles), Amazon will explicitly block customers with Australian accounts from ordering the vast majority of its new Kindle models online. It may be possible to order the models through third-party retailers and importers, but this is not clear as yet.

opinion/analysis
To say that there is huge interest from Australians in Amazon and its Kindle line-up is a colossal understatement. Any article published on Delimiter about Amazon Kindles tends to get a huge amount of page impressions as Australians flock to see whether and how they can get access to Amazon’s flagship e-reader and tablet lines.

With this in mind, I am severely disappointed that Amazon appears to making an ongoing habit of not selling most of its Kindle models to Australians. Almost every other manufacturer launches their tablet products in Australia – Apple, Google, ASUS, Samsung and so on. The fact that Amazon chooses not to do so is a rank insult. If Amazon is serious about being a tablet manufacturer, it has to realise that its home market of the United States is not the only market which consumes its products.

When it comes to Australian launches, we can accept delays, we can accept slightly higher prices for the same devices, and we can accept slightly degraded services when we use those products. We’ve had to come to accept those things. But what we should never accept is that the world’s largest publisher and distributor of eBooks should just ignore Australia completely with its new Kindle line, year after year. Australia is a substantial market and shouldn’t be the sort of afterthought which Amazon seems to believe we are. Contrary to Amazon’s apparent opinion, the world does not revolve around the United States.

As it did last year, Amazon this morning had the gall to forward me a media release regarding the Australian availability of its lowest-end Kindle. Well, sorry Jeff Bezos. The fact that your lowest end Kindle is available to Australians is not today’s story. Today’s story is about how Amazon left Australia off its launch list – for the second year in a row. Apple and Google can afford to get their flagship tablets down under, it appears – but Amazon cannot.