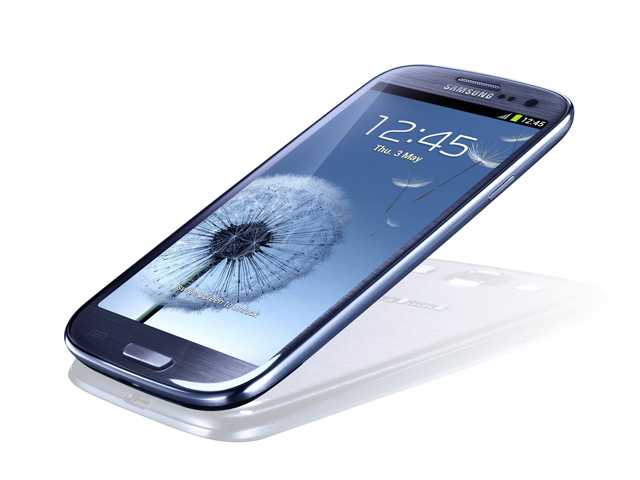 preview Overnight global electronics giant Samsung unveiled its latest smartphone opus: The Samsung Galaxy S III, the successor to its Galaxy S II model which continues to be one of the most popular smartphones sold in Australia. But an Australian launch isn’t yet on the horizon, and rivals such as HTC have already launched new top-end models locally. Is the Galaxy S III worth waiting for? Read on to find out.

Design
Over the past several years Samsung has been gradually refining its smartphone style with models like the Galaxy S, the Galaxy S II, the Galaxy Nexus and the Galaxy Note. That’s a lot of galaxies, come to think of it. One wonders whether Samsung is eventually building up to some kind of incredible ‘Universe’ phone which will blow us all away — or maybe it’ll introduce a smaller model, dubbed ‘Solaris’? We can only guess.

In any case, the Galaxy S III appears to be most similar in its form factor to the Galaxy S II and Galaxy Nexus before it. A large 4.8″ touchscreen dominates the phone’s appearance, surrounded by high-quality plastic in one of two colour schemes — ‘Marble White’ or ‘Pebble Blue’. The back of the phone is also plastic in the same colour scheme, and you can expect most of the normal inputs and outputs found on almost all Android-based smartphones — a headphone socket, speakers, front- and rear-facing cameras and volume controls — in all the approximately normal places. At the bottom of the Galaxy S III’s touchscreen is an oblong menu button and the normal two capacitive navigation buttons on either side. It’s 8.6mm thick, 136.6mm long and 70.6mm wide.

Probably the main thing which you need to know about the Galaxy S III’s design is that it features a much larger touchscreen than the Galaxy S II. For comparison’s sake, the iPhone 4S has a diagonal touchscreen size of 3.5″. The Galaxy S II has a screen a fair bit larger, at 4.3″, and Samsung’s gigantic Galaxy Note phone, which has been dubbed a “phablet” for its bastard positioning in between a phone and a tablet, has a jumbo screen size of 5.3″.

But make no mistake: If you have small hands, or even regular-sized ones, you are going to want to play with this phone first yourself before you commit to buying it. It is definitely on the large side, and closer to the Galaxy Note in feel than its predecessor, the Galaxy S II. Samsung appears to be banking that a larger screen will attract those tired of the iPhone’s smaler 3.5″ size. But that 3.5″ screen size has proven very popular over the years for a reason.

One caveat is that the border around the Galaxy S III’s touchscreen is very thin, meaning the touchscreen takes up almost the entirety of the front of the phone itself; meaning that Samsung has been able to keep the physical size of the phone itself within reasonable limits while still up-sizing the actual touchscreen. But we’d still like to actually feel it in the hand first before making a judgement on whether it’s too large or not.

Features
Right now, the Galaxy S III is one of the highest-end smartphones on the market, and this shows in its features list.

It runs version 4.0 (Ice Cream Sandwich) of Google’s Android operating system, its screen resolution is 1280×720 (for very sharp clarity) and based on Super AMOLED technology, it comes with an eight megapixel rear camera and a 1.9 megapixel camera on its front, it has an accelerometer, a gyrometer, GPS, NFC, Bluetooth 4.0, a digital compass, a microSD slot and it runs a 1.4GHz quad-core CPU, as well as a specialised graphics chip.

There are also quite a lot of software customisations and features which Samsung has added into the mix. To be honest, we’re really not sure of the value of a lot of them, and we’re conscious that many people who read Delimiter prefer to run their phones on more vanilla versions of Android from mod sites like CyanogenMod, viewing phone manufacturer additions as imperfect additions to an otherwise solid operating system; even if they’re not in the same league as the kind of crapware which Telstra likes to bundle with everything it sells.

However, there are some interesting new software aspects to the Galaxy S III which bear mentioning. Samsung has updated and refined its TouchWiz interface which sits on top of Android; Siri-like voice interaction is possible through a new app, S Voice, there’s a new feature called S Beam which lets fellow Samsung users quickly and easily send each other files wirelessly, you can play media content to a TV via AllShare Cast, and so on. Samsung users will be used to this kind of thing, and it’s gotten bigger and better with the Galaxy S III. I’m sure if you get used to all of these features, they’d save you some time or allow you to do things you probably wouldn’t think of doing otherwise. But they’re still the icing on the cake rather than the cake itself.

One issue which Australian buyers of the Galaxy S III will need to be aware of is that while the phone does support all of Australia’s 3G mobile networks, 4G performance is far from guaranteed, with Samsung labelling 4G support with the ominous words “dependent upon market”. This means we are going to have to wait a while to find out if Samsung will sell a version of the phone supporting the 1800Mhz 4G networks being built by Telstra and Optus.

Considering that most people buy a phone only once every two years or so, this is a major issue for the Galaxy S III in Australia. In a years’ time, 4G networks will be quite mainstream locally. Many people suspect at the moment that Telstra is planning to shortly launch a 4G version of HTC’s One X, which is perhaps the Galaxy S III’s biggest rival at the moment (not counting the iPhone 4S, of course, always a contender). If Samsung launches the Galaxy S III in Australia without 4G support, we will be severely disappointed.

Performance
With its quad-core customised CPU and new GPU, the Galaxy S III will no doubt be able to handle anything that can be thrown at it in terms of processing power. Perhaps the only real caveats we have about the phone’s performance would be its battery life; if it does support 4G speeds in Australia, and given its large screen size, we’ll want to be putting it through its paces over several days to determine whether it sucks juice as much as we suspect.

But just for the record, here’s what Engadget has had to say about its performance so far:

“Whizzing around the native apps and web browser was as pleasant as we expected, pinch-to-zoom pinged into action, while multimedia playback was effortless, irrespective of the software additions that Samsung has thrown into the mix”

“The third iteration under the Galaxy S name feels a lot more polished and thought-out than other Samsung products, and zips about comfortably with its powerful engine and responsive display.”

Sounds about what we’d expect. It’s top of the line and it shows it.

Conclusion
Samsung hasn’t confirmed an Australian launch for the Galaxy S III yet, but we’re sure the company is in talks with the major mobile carriers as we speak about its availability. Based on prior experience, we would guesstimate that the phone will launch locally in the second half of 2012, probably closer to Christmas than July, and will be on sale through all three major carriers; Telstra, Vodafone and Optus (as well as Optus subsidiary Virgin and the various Vodafone brands).

Of course, keen souls will be able to get the phone earlier through retailers like Mobicity, which has already started taking preorders for the device, at $799, $899 and $999 outright price points, depending on how much storage you want with it.

But the key issue for Australian buyers remains 4G compatibility. If you’re going to buy a high-end smartphone like the Galaxy S III in mid-2012, it is highly advisable to buy one which supports the 1800MHz 4G networks being rolled out by Telstra and Optus, which will be in very widespread in just 12 months’ time. If the Galaxy S III launches in Australia without 4G, we’d find it hard to recommend it. If it launches with 4G, it will likely be close to unbeatable. On 4G, this phone’s fate hangs. Because you can bet that by the time mid-2013 rolls around, there will be a slew of comparable models on offer from other manufacturers sporting that magic 4G label.