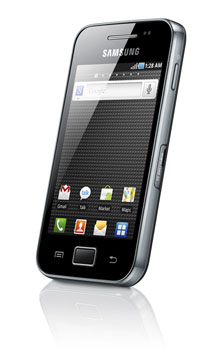 The wave of Android-based smartphones hitting Australian shores rose a little higher this morning with the news that another Samsung handset — the Galaxy Ace — would launch today on Telstra’s flagship Next G network.

Samsung has launched several major Android devices in Australia over the past year — ranging from its Galaxy S smartphone to its 7″ and 10″ Galaxy Tab tablets. The Ace represents a phone which is slightly less powerful than its upcoming Galaxy S II release, but it still packs a punch over many previous generation handsets.

The phone offers customers an 800MHz CPU, along with a 3.5″ touchscreen. The Ace runs version 2.2 (Froyo) of the Android platform, and it’s smaller and lighter than many devices on the market, coming in at 113g and with dimensions of 112.4mm by 59.9mm, with a thickness of 11.5mm. The included camera is a five megapixel model, and all of Australia’s major mobile networks are supported, with speeds up to 7.2Mnps.

A streamlined interface dubbed Swype, which allows users to enter text by swiping their finger across the on-screen keyboard, is also included.

The Ace will sell through Telstra for zero dollars up-front on a Telstra Freedom Connect plan, which costs $59 a month over 24 months, and comes with $550 worth of calls (with certain conditions), as well as 1.5GB of data per month and unlimited text messages. In addition, the handset can be bought up-front for $528.

“Building on the success of the Galaxy range, the Samsung Galaxy Ace offers a unique take on the Android smartphone experience, combining performance and functionality in a sleek design,” said Tyler McGee, vice president of Telecommunications for Samsung Electronics Australia. “We are excited to be partnering with Telstra to launch the Galaxy Ace and provide customers with the latest in Samsung smartphone design and innovation.”

The news comes as HTC will tonight take questions from journalists at an event in Sydney, with the company planning to provide details surrounding the launch of its HTC Desire S and HTC Wildfire S handsets on Telstra’s Next G network.