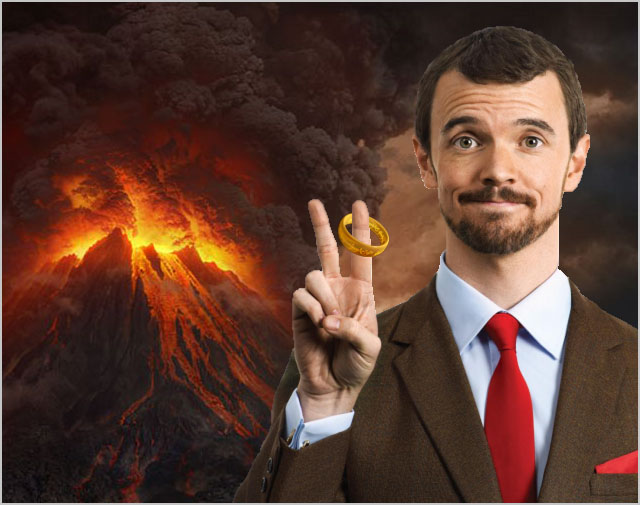 opinion Like a cluster of ancient elves residing deep within the sheltered enclaves of evergreen forest glades, the worthy folk of SingTel subsidiary Optus have long focused their gaze to the far north, where the dark lords of mighty Telstra have ruled Australia’s telecommunications sector from their fiery thrones.

Within Optus, mentioning the name of the dreaded beast is normally avoided, or best spoken in a whisper if you must — lest its baleful glare fall upon you in the night and send its minions clad in coppery finery to fall upon you where you sleep and drag you to its court, where you will find its final judgment less than pleasant.

It’s easy to understand Optus’ fascination with its erstwhile master. Telstra’s deep shadow has long fallen across Australia’s telecommunications sector. Its cloying influence can be felt in every marketplace move, and its size and dominance of infrastructure is so entrenched that any weighty decision made by its rivals must consider its possible reaction. And despite the fact that Stephen Conroy has learnt the name of the beast and is attempting to bell it in its murky lair, Telstra still has claws; a fact which lesser ascendants such as Internode are continually learning, to their peril.

However, like those folk from another tale, it is possible that Optus has been looking to the north for so long that its gaze has become fixated on the heights of Mount Doom, only to find itself undercut by one of its own from the valley of Isengard.

In battle against the great evil, Optus has long partnered with its fellow strugglers; noble warriors such as AAPT, Macquarie Telecom, Primus Telecom, iiNet and even Vodafone have banded together with the SingTel subsidiary in a courageous effort to fight the big T. And of course, who could forget the noble efforts of Hackett, son of Hackett, who has risen from nameless obscurity in the wastes of the South to become one of the industry’s most valiant princes.

But now Optus is facing a powerful threat from one of those players with which it has long fought side by side. I speak of course of iiNet, whose leader Michael Malone has played a pivotal role in the future of the telecommunications sector from his fell fortress in the West.

As we’ve previously discussed, when it comes to fixed broadband, iiNet has been sticking it to Optus for some years now, recently claiming the title of the nation’s second-largest ADSL player and continuing to grow its customer base organically and via a series of ferocious acquisitions that have taken place with the swiftness of a Nazgul falling from the sky onto prey far below.

The release by the Malone juggernaut yesterday of its latest financial results (PDF) — in a year when Optus’ own fixed-line broadband performance has been relatively stagnant — did nothing to dispel the impression that iiNet is currently a ferocious competitor. Revenue up 48 percent to $699 million? Underlying earnings up 30 percent to $105 million? Operating cash flow up 54 percent to $96 million? These are the sort of percentage growths that Optus hasn’t been able to dream of for the best part fo a decade, despite constant investment in its networks and a steady revenue and profit march uphill.

And speaking yesterday, Don Malone gave a number of signs that more open warfare was in store for the SingTel subsidiary.

Currently, Malone told journalists in a teleconference, iiNet did a lot of customer swapping with Telstra, and to a certain extent other broadband providers — but not really with cut-rate ISPs like TPG. Optus did have a large market share in fixed broadband, the iiNet chief noted, but the SingTel subsidiary had been “pretty passive” in terms of competing in that arena — due, you writer believes, to its incessant focus on its more profitable mobile operations.

However, Malone noted, there were opportunities opening up to grab some of that Optus gold.

In October or November this year, he said, a process would be finalised which would allow iiNet to more easily transition customers off the Unbundled Local Loop-based services which Optus’ wholesale network uses, and onto iiNet’s own network.

Secondly, as the NBN is rolled out, many Optus customers who have for years clung to their HFC cable connections, bundling them with other Optus services, will for the first time be using fixed broadband infrastructure which is shared with competitive providers, making it significantly easier for them to churn to other companies. Will iiNet pick up quite a few Optus customers during that process? “We’d certainly hope so,” said Malone yesterday.

However, like an ancient ring of power long lost deep among the pebbles of a river, there is also a further prize which could allow iiNet to take on Optus more directly in Australia’s telecommunications sector.

Currently, traditional fixed-line telco players like Internode, iiNet and TPG primarily focus on the ADSL broadband market, due to the prohibitive (for companies of their size) cost of investing in mobile telecommunications around Australia. Where they do dabble in mobile — and for iiNet, this means some 7,000 customers at the moment, such companies have done so through gaining access to Optus’ 3G network through its wholesale division.

Like a jealous lover, Telstra has for its own part horded its ‘precious’ Next G network to itself since the network was constructed in 2005 and 2006, using the infrastructure to steal a next-generation march on its rivals. And that strategy is paying off in spades, with the company’s mobile growth over the past year easily eclipsing that of Optus and its subsidiary Virgin — not to mention Vodafone, which is actually going backward.

However, a recent article published by iTNews exposed the fact that Telstra may soon open up Next G for wholesale access. Mobile Virtual Network Operators using Next G were likely to emerge early in 2012, the article stated. Would iiNet like to resell services on Next G? “Yes, we would be very interested,” said Malone yesterday — noting that like Optus, iiNet’s main struggle now is to get its existing customers to buy more services, with the broadband market being largely saturated.

One of the key problems with Next G — which has fuelled the growth of Optus’ low-cost Virgin brand — is the price. Sure, you get a lot better coverage, reliability and speed if you sign up to buy 3G services from Telstra, but you also pay through the nose for it. Optus has solved this problem by hiving off low-cost customers onto Virgin, and keeping the more high-value customers for itself.

There remains no doubt that like Optus and Virgin, Qantas and Jetstar and Coles and Bi-Lo, Telstra would benefit hugely from having a low-cost brand to sell cut-rate, limited access to Next G through. And there is strong reason to suggest that iiNet could be that brand. iiNet already has all the systems set up to resell mobile services through Telstra the exact same way it already resells fixed broadband services.

In fact, at this stage, iiNet may be coming close to being Telstra’s largest fixed services reseller.

One last factor for consideration.

Questions have long swirled around the corporate future of iiNet, given its lack of strong majority investors on its share registry, its strong levels of growth and attractive customer base. With a decent mobile operation tacked on and with the National Broadband Network on the way to demolish any regulatory roadblocks in the way to Telstra further consolidating its power in Australia’s telecommunications landscape, could Telstra eventually see iiNet as a potential acquisition, perhaps in about five years’ time? An acquisition which could become a permanent subsidiary brand, one which would finally redeem Telstra’s awful reputation for woeful customer service?

It’s a long shot, but right now we have no doubt that Telstra’s playing the long game. Its chief executive David Thodey will be on deck for quite a few years more, and you can bet he’s used the eventual ability to start acquiring again in Australia as one benefit resulting from the NBN to sell the entire policy to Telstra’s board.

The hungry beasts of capitalism must be fed fresh meat, and often — or else they will grow stagnant from a lack of injection of new talent.

iiNet, for its own part, clearly knows it is an acquisition target and has been one for some time. With its share price languishing as a result of the mini-GFC which some commentators believe is on its way, this week it announced a largish share buyback which will take a great deal of its stock off the market, and no doubt result in its share price rising to levels which place a more realistic valuation on the company.

No matter the eventual outcome, for our own part we’d love to see iiNet get its hands on Next G. Who wouldn’t be attracted by an offer combining the seductive dark power of Telstra’s flagship mobile phone network with the bright customer service and decent pricing that iiNet’s white knight Michael Malone can deliver? And ultimately, of course, opening up its network would offer for Telstra something which could only be beneficial from the perspective of a dark lord sitting upon his distant throne; the sound of lesser rivals engaging in a vicious pricing fight to the death, far from his seat of power and without any real effort expended on his part.

Sometimes the only way to win the war, is to freely give your “precious” away. The only danger for those who choose to accept the gift, is how deeply in the dark their new master will bind them.