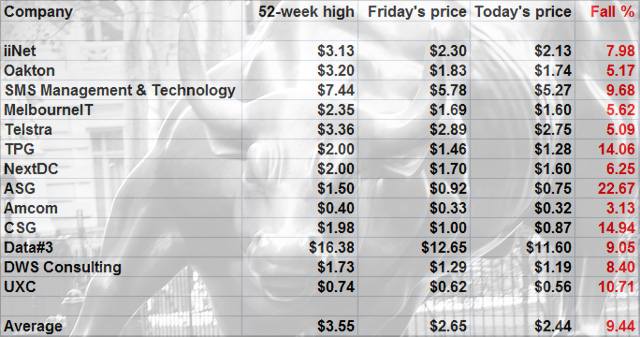 The global sharemarket rout triggered by the downgrade of the US Government’s credit rating has had a dramatic effect on Australian technology stocks, with all of the nation’s major listed technology companies suffering share price drops over the past several days ranging from three percent to over 22 percent.

Australia has several dozen listed technology stocks. Of these, the largest and most closely watched is Telstra, which has a wide diversity of investors ranging from large institutional players such as banks all the way down to so-called ‘Mum and Dad’ investors who picked up the company’s shares during its lengthy privatisation.

Out of all of Australia’s technology stocks, however, Telstra has been one of the least hit by the financial saga which has unfurled globally since the weekend, with the company’s share price sinking only 5.09 percent since Monday.

The telco’s little brother TPG wasn’t so lucky, however, taking a 14.06 percent body blow to its share price in the past two days. The company is now trading at $1.28, which is a hair above the lowest level it has seen in a year, $1.23. Fellow telco iiNet was also substantially affected by the sell-off, with the company’s share price plunging 7.98 percent to $2.13.

That price leaves iiNet down a solid dollar from its high point over the past year of $3.13 — and also just slightly above its year’s worst price.

A large part of Australia’s listed technology sector is made up of IT services companies, including names such as UXC, DWS, SMS Management & Technology, Oakton and the diversified Data#3 group. Most of this cluster of companies has also been affected by the sharemarket rout, with ASG being hit the worst percentage-wise, sinking 22.67 percent in the past several days.

The news came as local IT services firms started to deliver mixed results in announcing their latest financial standing this week. Oakton’s overall revenue (not including the results of its court settlement with partner Tenix) was flat, but profits were 35 percent down on the previous year, and the company’s chief executive warned the company’s Victorian operation had “significantly underperformed”.

Overall, the company anticipated an increased demand for its services across most sector, Wilson said, but the executive also warned that overall domestic demand might be adversely impacted by what he described as “international economic issues”.

In contrast, Data#3 noted last week that the company expected its profits to be ahead of previous guidance, with the company planning to book a profit before tax up about 38 percent. Revenue was on track to reach $697 million — about 16 percent up on the previous year. “While the market remains quite fragile, we’ve once again been able to achieve a great result for shareholders,” said Data#3 managing director John Grant.

Broader commentary on the market this afternoon seems to be focusing around the idea that the steep sharemarket fall — which wiped billions off the value of Australian companies — had largely bottomed out, with investors looking to capitalise on the low prices and add cheap pickings to their portfolio.