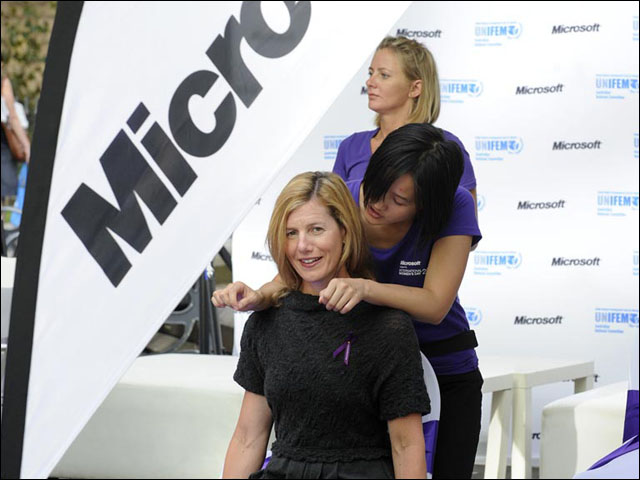 Microsoft has promoted Tracey Fellows, the long running chief of its Australian division, to run its Asia-Pacific operation; but without immediately clarifying the identity of the executive’s successor or whether a direct replacement would be appointed.

Fellows (pictured above receiving a massage at a Microsoft promotional event for women) has led Redmond’s Australian operation since January 2007, when she was appointed to replace the company’s former local chief Steve Vamos.

In the role, she has overseen some of Microsoft’s largest launches in Australia; Windows Vista, for example, and Windows 7 — and recently, the company’s extensive partnership with Telstra to launch its new Windows Phone 7 mobile platform. The executive joined Microsoft in 2003 in its Marketing division, first overseeing the company’s server products, then as its local marketing director, before the MD promotion in 2007.

In the role, Fellows has frequently been cited in public as a strong example of a female executive rising to the top of her profession in the Australian corporate space; alongside others such as Telstra’s group managing director of business, Deena Shiff. Fellows is originally from Canada — having migrated to Australia during her high school years, and has also worked for Dell and IBM.

In a statement today revealing the promotion, Microsoft said Fellows would succeed Emilio Umeoka in his role as area vice president for the company’s Asia-Pacific region, overseeing sales, services and marketing for 12 countries in the region and reporting directly to Jean-Philippe Courtois, President of Microsoft International.

Umeoka will leave Microsoft in late December to pursue “a new career opportunity” in the US closer to his family. Fellows will step up into the role in 22 December and will relocate from Sydney to Singapore.

“The Asia Pacific region is incredibly diverse and dynamic,” Fellows said in a statement. “It is also a place where we can do much to deliver on our mission to make technology available to the next generation of users, and I am keen to make the most of the opportunity to work with our partners and governments around the region to deliver on that commitment.”

“I am passionate about education and the role that technology can play in developing skills and improving learning, as well as advancing the role of women in the IT industry. We have a track record supporting these goals, and I am keen to ensure we build on these very strong foundations.”

There is a strong history of executives in the IT sector stepping up from Australian leadership roles to take on wider Asia-Pacific responsibilities, often from Singapore. Former SAP Australia and New Zealand chief Geraldine McBride, for example, was promoted to lead the company’s Asia-Pacific operations in January 2007 before leaving earlier this year.

However, Microsoft could not today say whether Fellows would be directly replaced or who would take her position locally if so.

One executive who was seen by some parties as an eventual potential successor was the company’s former director of business and marketing operations, Tony Ward, who had wide-ranging responsibility within Microsoft Australia under Fellows. But Ward resigned in July and was replaced by Nigel O’Rorke — who has now only been in the role for a few months.

Out of the rest of Microsoft Australia’s senior leadership team, one of the most high-profile executives is Pip Marlow, the company’s public sector director.