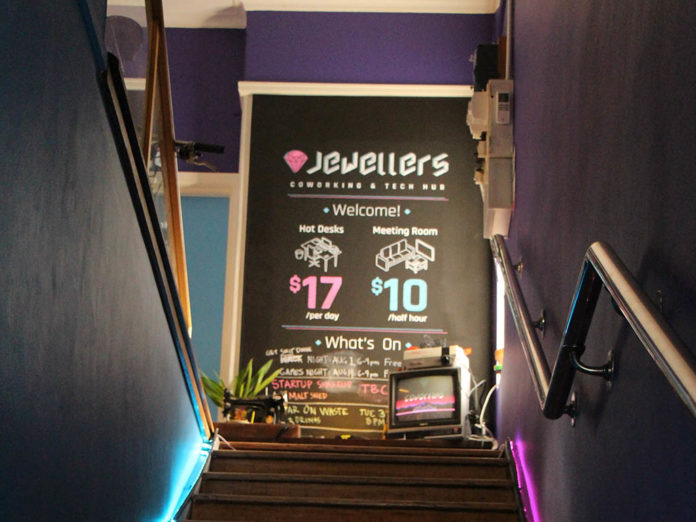 As part of the Kickstarter campaign for The Frustrated State book, Renai committed to publishing the stories of backers at the $350 tier and above on Delimiter. This is the story of Rohan Latimer, which has also been sent to all backers of The Frustrated State.

“There’s not the crazy competition like in the big cities, so you don’t feel like another cog in the machine. When you do tech stuff here, you actually feel like you’re doing something for the community.”

Rohan Latimer describes himself as a “Web Dev Magician”. “I’ve been a freelance developer my whole life,” he says.

Many people would see this as living the life. Web developers are often able to achieve an enjoyable fusion of the creative and technical sides of their brain. Plus, the freelance life offers the chance to work on a number of dynamic projects and not get tired down to any one particular boss or organisation.

And who wouldn’t want to work in trendy Melbourne? But by about 2014, Latimer had had enough.

There was still plenty of work around, and enjoyable work to boot. But sometimes other factors started to make it difficult to appreciate. The developer says sometimes he had to work “crazy hours” on projects that burnt through staff at a rapid clip. Unethical practices had started to creep into some sections of the IT industry in the big city. Sometimes it was unreasonable management that was the problem.

“We went overseas for like 12 months, because I got burnt out and my partner got burnt out,” Latimer says. His partner is a specialist obstetrician gynaecologist.

The pair had an awareness of country areas — Latimer’s partner had undergone some of her training in Wangaratta, a city in the Northeast of Victoria. Wangaratta is still quite close to Melbourne — about 250km along the Hume Highway — but it’s got a much smaller population (about 19,000), and a breezy relaxed attitude that is completely different the hustle and bustle of the big end of town.

So it wasn’t much of a stretch when Latimer started spending time ‘out bush’ on a property about 25km outside Wangaratta. Initially he worked out of his winery shed. It was a rustic location with terrible broadband — the NBN’s Interim Satellite Service — but it was good enough to get work done and prove the point that Latimer could still earn money working remotely.

With his partner eventually joining him (now working in Wangaratta), the pair made a go of the rural life. But that winery shed was not really cutting it in terms of being Latimer’s permanent office. In summer the temperature inside got up to 45 degrees, and the broadband was not precisely modern by today’s standards. Then, too, it was a little lonely working out of town on his own.

In 2016, a decently sized office space became vacant in the Wangaratta central business district, in what had been an old jeweller’s shop. So Latimer hit upon the idea of setting up a tech-focused co-working space where like-minded ‘solopreneurs’, startups, sole traders and work-from-home specialists of all kinds could congregate.

The broadband in the area was still not great — all Latimer could get installed in the office was an old-style ADSL connection And even that was not great at times.

“It was just horrendous,” he said. “NBN wasn’t available then. It was ADSL, and I had a half-gig website I had to upload. It failed halfway through, so I got a Telstra dongle and just did it over mobile. I charged it on, but it was funny that I could calculate how much data was used because I was like — oh yeah, that was half a gig, so it’s $10 for a gig, so $5.”

The broadband eventually got better — and the local community started to pay attention. All sorts of other businesses started coming out of the woodwork to get involved.

Latimer says there is a real diversity of technology-related workforce in the Wangaratta area.

Some are stay at home mums who also work part-time as graphic designers. Then there’s a linguist who works remotely for a company developing speech to text technology in Sydney. Another IT security specialist conducts penetration testing remotely for customers.

Latimer has had bookkeepers walking into his co-working space looking for office space, and knows an electronics hardware designer, as well as two developers for the Melbourne-based online digital marketplace company Envato. “They’re big on remote work,” he says. Another co-working prospect worked for an agriculture technology company which does cloud-based farm management.

Part of the attraction of Jewellers Coworking is that it’s not actually that far from Melbourne — a little over two and a half hours by car or three and a half hours by train. So people are able to drop in and test out the facilities and the local community.

And the benefit of living in a rural location is clear.

Latimer admits his income has dropped by living in a rural location. But there also isn’t a need for as much cash coming in. “We don’t have to have a million-dollar mortgage in Melbourne and work that off for 30 years,” he says. “We can have affordable housing out here and clean air.”

“Another good aspect is there’s not the crazy competition like in the big cities, so you don’t feel like another cog in the machine. When you do tech stuff here, you actually feel like you’re doing something for the community.”

One example is that Latimer acts as the “de facto IT support” for the clinic his partner co-owns. He has been able to help the clinic through some of its telecommunications teething issues as it has been switched onto the National Broadband Network.

And when local businesses start to grow, it can be rewarding for the whole community.

Latimer says he knows a local who started a business as an eBay outlet in his garage. “Since I’ve set his website up, he’s gone on and taken over this massive warehouse in Wangaratta. He’s just growing and growing and going crazy,” he says. “It’s good to see him going good. I don’t care if it’s retail or medicine or whatever. You get to see the impact.”

The community aspect of living in a rural location is a key aspect of Jewellers Coworking. The coworking space’s website states:

“We’re from all walks of life, but we have one thing in common: Community spirit. While we like to get our shit done, we’re a friendly bunch who love embracing the many awesome coffee, lunch and drinking spots in the area. And we regularly host in-house events which offer the chance for our members to learn, contribute, and grow their business with the help of others.”

For Latimer, who grew up in the Southeast in Melbourne, this represents a good change of pace. “I’d never had that small community thing,” he says. “You speak to people every day. It’s a good change for me, and the slower pace of life is good as well. It’s not so hectic.”

In some ways, it very much feels as though co-working spaces are having a ‘moment’ in Australia. Latimer has been to conferences focused around the phenomenon. He notes that governments and local councils alike are trying to support the development of co-working spaces.

“They’re popping up everywhere,” he says, noting estimates that there are now between 200 and 300 co-working spaces across Victoria alone. Big spaces such as Sydney’s Fishburners facility are now nationally known, and global companies such as WeWork are now entering Australia as well.

But if there is one message which Latimer has to pass on, it may be that those setting up co-working spaces need to be sensitive to the local community which they operate in.

At one co-working conference he attended, for example, Latimer noted a “big divide” between regional co-working spaces which were created “mostly for community purposes” to bring sometimes isolated workers together, and some of the metropolitan spaces which are more focused on the aim of making a return from the use of the space.

Latimer points out that he didn’t get interested in co-working spaces just because of the potential availability of better broadband in a centralised location. Some spaces he has checked out in major cities have people seated a number of metres away from each other. “I didn’t speak to anyone,” he says of one space in Vancouver.

Another key factor is positioning each space correctly.

“You might have one that’s more about creating stuff and graphic designers or more startup-y or more techy or whatever,” he says. “I just position mine as techy because I’m techy and I wanted to get all the nerds out of Wangaratta and see how many there are, and that was kind of successful.”

Ultimately, living a more rural life won’t work out for everyone. Some people prefer the big city. It’s common for those who have grown up in rural areas to gravitate to metropolitan areas. Every area has its strengths.

But it definitely feels like Latimer — and many other technologists like him — have found their place, in an area where the grass on the other side of the fence may just be greener.

One challenge the developer has not quite managed to master is how to educate everyone about the new nature of work in the new digital economy. His co-working space is named ‘Jewellers Coworking’, after the previous occupant of the facility.

“Just because I called it Jewellers I still get people coming in thinking I sell jewellery,” he laughs. “I pretty much should’ve anticipated that, working in advertising for seven years. I even have a sign on the front which says: ‘No, we don’t sell jewellery’.”