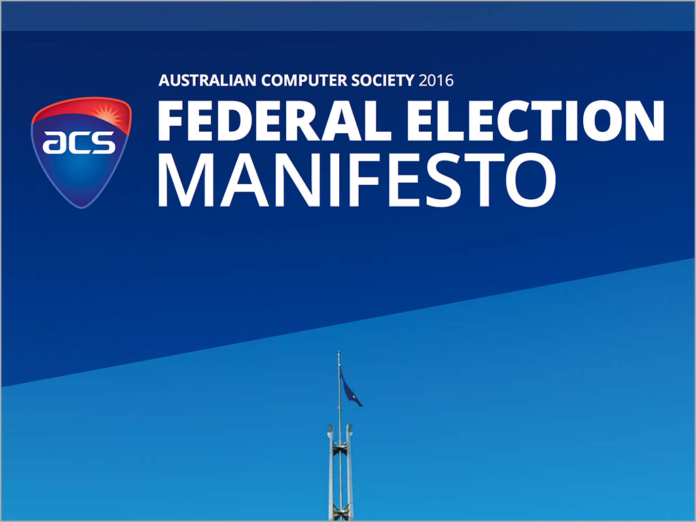 news The Australian Computer Society (ACS), an advocacy group for Australia’s ICT professionals, has released what it is calling its “Federal Election Manifesto”, setting out five key policy areas it says must be addressed if Australia is to “secure its economic future in the information age”.

In a statement, ACS President, Anthony Wong, wrote of the “critical need” for the country’s political leaders to address the “twin challenges” of digital disruption and an economy in transition.

“The information age is driving a depth and pace of change which is unprecedented in human history,” he said. “Added to this is an Australian economy transitioning from one based less on our natural resources strength to one built increasingly around successful services and knowledge based industries.

“Now more than ever, we need our leaders to focus on the issues which will be pivotal to ensuring Australia captures the opportunities of the information age, whilst at the same time ensuring our people do not get left behind,” Wong said.

The ACS Federal Election Manifesto (available online in PDF format) identifies the areas the ACS believes must be prioritised by Australia’s political parties to bring “fresh, innovative and bold new thinking” to address the challenges ahead.

Saying it is time for “decisive action”, the group said the first of the five policy areas concerns digital skills and digital literacy.

“Critical” changes are needed to the education system, said the ACS, particularly in schools and universities, and in approaches to workforce planning and training.

The group offered a number of recommendations including the learning of new skill sets by students, better collaboration between universities and employers to better match job opportunities with graduate skills, and workforce planning models which provide real-time information on job markets and education pathways.

Second on the group’s policy list is diversity, which the ACS said it would tackle with the development of national workforce strategies to boost labour force participation rates for women and mature age workers.

To help encourage more female workers in ICT, the ACS recommended the introduction of a campaign to “educate and inspire” young female students about the “exciting opportunities” offered by a career as an ICT professional.

Cybersecurity is third on the ACS list – an issue that the society said is estimated to cost Australians over $1 billion each year.

Increasing the pool of skilled cybersecurity professionals will be “key” to transforming Australia’s capabilities in this space, the ACS said.

Raising awareness amongst Australians of the potential risks of the internet, is also key, it added.

The ACS recommended that the incoming government should work to hasten implementation of the Commonwealth’s ‘Cyber Security Strategy’ and address the shortage of cybersecurity professionals through a series of “targeted actions at all levels of the education system”.

The NBN features on the policy list too, with the ACS saying that the “reach, speed and quality” of a national broadband network is the “foundation” of a successful digital economy.

The group also said a higher priority should be placed on connecting small to medium enterprises (SMEs) and education institutions, which have a “critical role to play in the information age”.

The final item on the ACS’s “manifesto” is a more general call for a new “philosophical approach” to policy development in the information age.

Rapid change driven by digital technology is taking governments into “unchartered waters”, it said, and new policy challenges are arising as a result.

Therefore, a “new, innovative approach to the policy development process is needed”.

The ACS recommended that this new approach should involve “greater input from organisations at the forefront of the information economy”.

Further, it called for the creation of an independent policy advisory organisation, with membership drawn from employers, the education and training sector, not-for-profits and professional bodies.