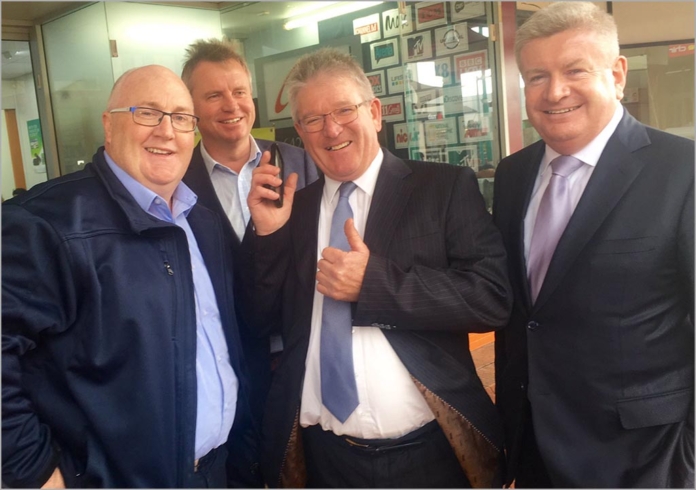 news In a change from its previous commitment, the Coalition Government has announced that it will abandon the satellite broadband rollout on the west coast of Tasmania and instead deploy fibre to the node (FTTN) via the NBN.

In a statement, Communications Minister Mitch Fifield said that “major towns” on the west coast will now get superfast broadband using either FTTN technology or the fixed wireless network.

The move marks an “$18.5 million commitment”, he added, that will come about if the Coalition is re-elected.

Fifield made the announcement along with Brett Whiteley, Liberal Member for Braddon, and Deputy Premier Jeremy Rockliff (pictured above). Also in the picture above is Phil Vickers, the Mayor of West Coast Council.

Saying the changes are part of the existing “Technology Choice” plan, the three said that the alternative technologies will replace the satellite rollout to “more than 2,700 west coast premises”, including FTTN to Queenstown, Rosebery and Zeehan, and fixed wireless to Strahan.

Welcoming the shift in policy, Whiteley said he had “listened to and worked with these major towns along the west coast to ensure that the technology mix was the best fit”.

“The west coast region is a strong economic performer and this plan will ensure it continues to attract new investment to help create jobs and growth for the region,” Whiteley said.

Rockliff added that an FTTN and fixed wireless rollout would “give certainty” to residents and businesses which “rely heavily” on the Internet.

“The $4.5 million of in-kind support provided by the Hodgman Government further demonstrates its commitment to the west coast community,” Rockliff said.

According to Fifield, the Tasmanian Government will support the move by making the existing but unused TasNetworks’ fibre optic cable available to the NBN under a lease model “at no cost over a suitable long-term period”.

Under the Coalition, the NBN be completed “six to eight years sooner nationwide than under Labor’s plan and at around $30 billion less cost”, Fifield added.

“Labor’s approach to the NBN will see Tasmanian families and small businesses pay more and wait longer,” he said.

The $18.5 million plan is “fully costed and fully funded”, according to the statement, and would includes Federal funding and “access to an existing state-owned fibre link”.

Additionally, it added, NBN construction resources that are currently deployed in towns on the north coast are expected to move to the west coast around the middle of next year.

In late April, the Labor Opposition promised to deliver fibre to the premises (FTTP) to much of the west coast if it wins the upcoming Federal Election.

The move seemed aimed at resolving the complaints of residents and businesses in the area over being relegated to satellite broadband access under the Coalition.

Some towns had been previously slated to receive a full FTTP rollout as part of the previous Labor Government’s original NBN plan.

The Coalition’s latest announcement would seem an attempt to appease these communities without the full outlay of bringing fibre into those premises.