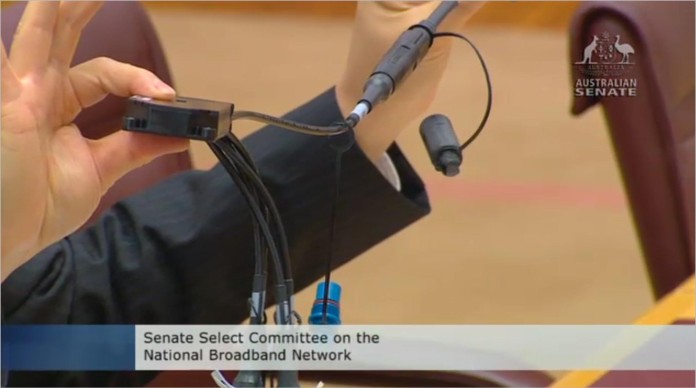 news British telco BT has reportedly followed the NBN company in Australia and conducted trials of so-called ‘skinny’ fibre technology that could allow the telco to substantially cut the cost of deploying fibre throughout its network.

Several weeks ago Delimiter and a number of other media outlets published a set of leaked documents produced by the NBN company in August last year. The documents detailed the fact that the NBN company was set to trial a new style of fibre cable deployment in the ‘Local Fibre Network’ which delivers fibre to neighbourhoods as part of the NBN rollout.

The aim of the project was to test a new kind of “skinny” fibre deployment which the NBN company hopes will allow it to drive down the cost of rolling out fibre cables around Australia. The cables are physically thinner than the usual cables used by the NBN company, meaning they can be deployed more cheaply and in locations where thicker cables could not.

Since the leaks, NBN chief executive Bill Morrow has confirmed trials of the skinny fibre cables were able to cut the cost of deploying Fibre to the Premises infrastructure by $450 per premise, as well as the rollout time by four weeks.

Morrow believes the technology would primarily be used as part of the NBN company’s plans to use Fibre to the Distribution Point as part of its network. This network rollout method pushes fibre further out into neighbourhoods, but not all the way to customers’ premises.

Late last week, it was revealed that BT was set to use similar technology in the UK. UK site ISPreview reported that the internal magazine of BT’s wholesale division Openreach had trialled a new 5mm cable which “could save a bit of time and money”. We recommend readers click through for the full article.

The UK currently has substantially better access to broadband than Australia, due to the fact that BT commenced a nationwide Fibre to the Node rollout back in 2008, while Australia was still debating how to progress our own National Broadband Network project. The country’s HFC cable operator, Virgin Media, also provides high-speed broadband through its competing infrastructure.

In Australia, the Opposition and commentators such as telco analyst Paul Budde believe that the combination of skinny fibre with Fibre to the Distribution Point (FTTdp) technology may allow the Government and the Opposition to both switch to a policy of the NBN deploying FTTdp/skinny fibre as a substantial part of the NBN rollout.

This would have the effect of allowing the NBN company to provide similar speeds as Labor’s original FTTP rollout, but at a cost comparable to the Coalition’s preferred Fibre to the Node model.

BT appears to primarily see the skinny fibre option as a solution to areas where it finds it difficult to get full fibre cables through its ducts, due to their width. However, like the NBN company, it too has trialled FTTdp as a potential technology that could be used within its network.

In September 2014, BT said it is greatly encouraged by the potential of the FTTdp technology. The telco said: “FTTdp is potentially a more cost effective and simpler solution than both FTTP and dedicated business lines such as Ethernet. This is because less fibre and civil engineering is required. It also has the potential to be less disruptive for the customer given it is likely it could be a “self-install” product with no need for home engineering visits.”

Dr Tim Whitley, MD of Research and Innovation, BT Group said: “We see G.FAST as a very promising technology with significant potential – that’s why we’re putting some of our best minds on the case to assess it fully in a purpose-built facility.”