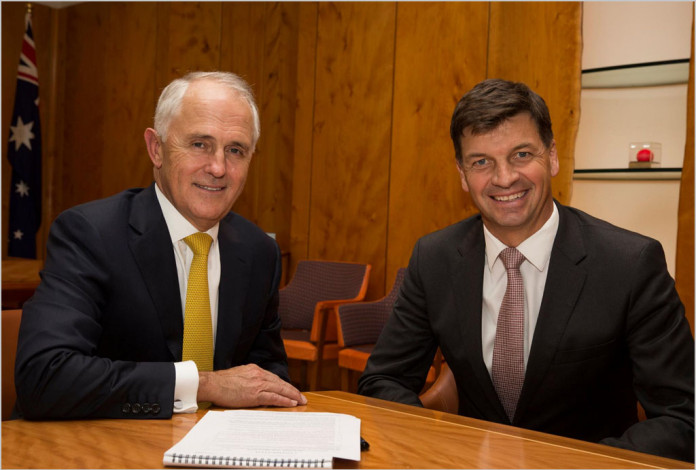 news Malcolm Turnbull appears to have stripped responsibility for digital government policy from his Communications Minister Mitch Fifield and handed it to a neophye MP, in a move that appears set to give the Prime Minister’s Digital Transformation Office a new overseer.

Then-Communications Minister Malcolm Turnbull established the agency early in 2015 with the intent of transforming the Government’s online interaction with the public. It is tasked with using technology to develop “simpler, clearer, faster public services” and is working on a number of substantial IT projects across the Federal Government and even interacting with some state and territorial agencies.

However, in the latest Cabinet reshuffle announced over the weekend, Turnbull appears to have removed Fifield’s Digital Government responsibilities and handed them to Liberal MP Angus Taylor, who will now serve as the Assistant Minister to the Prime Minister with special responsibility for Cities and Digital Transformation.

“These are two key whole of government areas and they will be taken, continued to be driven through my leadership and my department in the future,” said Turnbull in a press conference.

Taylor only entered Parliament in 2013. However, the MP has an extensive background that may assist him with his new role.

The Liberal MP was brought up on a rural property, but studied Economics and Law at the University of Sydney, eventually winning a Rhodes Scholarship to Oxford. He eventually became a partner at consulting firm McKinsey and retains links with a number of agricultural organisations.

Taylor is currently chair of the Joint Standing Committee on Treaties — a role which he has used to speak out in favour of the controversial Trans-Pacific Partnership deal which has yet to come before the Federal Parliament.

It appears the MP’s selection by Turnbull for the role may have been at least partially related to political reasons, with reports that the MP may be facing a preselection challenge for his seat of Hume.

“It is a great honour to be given responsibility for some dynamic and exciting areas of government policy,” said Taylor in a statement on his Facebook page. “For many years, I have had a strong interest and involvement in digital innovation.”

“Government needs to be clever with its services and systems, if we are to deliver better health, education and welfare while containing growth in spending.”

“I am also delighted to have responsibility for cities, particularly given that the new boundaries of Hume span the fastest growing parts of outer Sydney, as well as the growing regional city of Goulburn. Our capital cities and regional cities struggle with affordability, amenity and congestion. This must be a priority for the Federal government, as a major investor in transport infrastructure.”

“I’m looking forward to bringing a lot of energy to these new areas of responsibility and as always I thank the people of Hume for their continuing support.”

opinion/analysis
What is my opinion of Angus Taylor?

I haven’t met him and I don’t know too much about him. So I don’t have much to add to this situation just yet.

However, I will note that McKinsey consultants — especially those that reach partner level — are generally pretty capable at assessing complex situations. Taylor will have seen a great deal of business change in his time, which will stand him in good stead for the transformational change that the Federal Government’s digital operations need to go through.

In addition, Taylor’s seat of Hume is an extremely safe seat for the Liberals — there is next to no chance that the MP will get knocked out of it in the upcoming election this year.

What this means is that if Taylor is able to retain preselection for his seat (and Turnbull’s favour will certainly help with that), and if Turnbull keeps him in the digital transformation portfolio for some time, then Taylor could become influential in the direction that the Federal Government takes its digital operations. I guess we’ll have to wait and see.