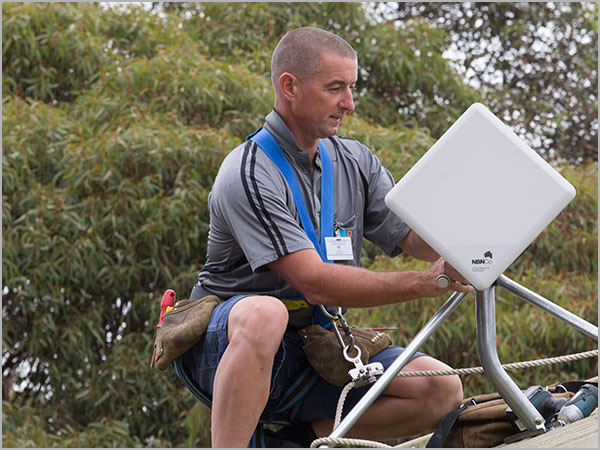 news Having trouble with your NBN Fixed Wireless connection? The solution may be simple: Install a ‘mast’ on the roof of your premises that will boost your antenna higher than nearby trees. It sounds stupid, but it’s done the trick for some — and it may fix your connection too.

Earlier this month, Delimiter reported on the case of Grant Maw, an independent software developer in Queensland who had suffered a number of problems with his NBN Fixed Wireless installation.

Maw had gone through a complex process involving several steps and multiple wireless reception tests with the NBN company as well as retail ISPs such as Optus and SkyMesh, in an attempt to get his NBN Fixed Wireless connection to function better than the existing ADSL broadband connection which has been connected to his property for some years.

The NBN company’s fixed wireless product is designed to serve the needs of a small percentage of customers who typically live and work in areas on the outskirts of major cities, or in small communities in rural and remote areas. The network is primarily being built by Swedish manufacturer Ericsson (who also built Telstra’s Next G mobile network) and currently provides speeds of 25Mbps down and 5Mbps up, although the NBN company has also recently sent an upgrade to the network live which will allow speeds of 50Mbps/20Mbps.

However, Maw was seeing highly variable speeds through the service. Initially, through Optus, he was able to see download speeds of between 27Mbps and 35Mbps to Maw, as well as upload speeds of between 12Mbps and 15Mbps. But the speeds soon changed, dropping to about 5Mbps, with the lowest speeds being 1.64Mbps.

Problems were also seen through a SkyMesh Fixed Wireless which Maw tested. He achieved download speeds of about 8Mbps on what was supposed to be a 25MBps connection, with upload speeds being essentially unusable at 0.04 to 0.1Mbps.

Some of the problems appear to have been fixed by a reconfiguration of Maw’s computer and modem.

However, the software developer told Delimiter this week that it wasn’t until the NBN company sent out yet another technician to his property and physically installed a heightened roof antenna on his house that the issues were fixed for good.

Maw had initially been told that the extensive trees surrounding his property would not interfere with the NBN company’s Fixed Wireless network.

However, this week the NBN company sent a technician to Maw’s property — the third he has seen — who installed a 1.8m mast on his roof, so that the signal from the NBN company’s local Fixed Wireless tower was above the local tree line.

“We are now getting 88Db signal strength, and I am now getting very fast speeds of the order of 45/18[Mbps] (on a 50/20 connection), which is double what I was getting yesterday,” said Maw.

Maw’s situation appears to demonstrate the high levels of variability in getting a NBN Fixed Wireless connection installed.

The software developer had previously had two NBN technicians visit his property, each of which gave conflicting messages about his wireless signal strength, and about the issue of trees interfering with that signal. He also had multiple support calls with his retail ISPs.

“I guess the main point here is that even after 2 installers AND a visit from NBN co, things were still not installed properly, and it wasn’t until a 3rd installer came to take a look (which was, to be fair, at the behest of Skymesh) that the installation was carried out correctly,” said Maw.

Maw has told his story because of his concern that others may be seeing the same issues.

“Others may be having these sorts of issues as well and if that’s the case, then the fixed wireless rollout is likely to be plagued with problems, or worse, people will be told (as I was originally) that the only way they can access NBN is via satellite,” he said.

“The average punter at the end of all this is told one story by one person and another story by others and unless they have a networking background won’t have a clue what to make of it all.”

opinion/analysis
What we have here is pretty conclusive evidence of a few different things with respect to the NBN company’s Fixed Wireless rollout.

Firstly, it is apparent that you cannot 100 percent trust what the technicians who install your Fixed Wireless setup will tell you about the speeds you will be able to achieve on it. You may get completely different stories from different technicians.

Secondly, it is apparent that you also cannot 100 percent trust the ISPs that you are buying broadband services from, as they also may not be completely in the know when it comes to your connection.

I would liken this very much to the situation with respect to getting ADSL broadband connected. Often in the past, I’ve had issues with a retail ISP like iiNet not quite knowing what is going on inside Telstra’s network in my street, and even Telstra hasn’t been able to fix a problem. It’s not until a higher-level engineer looks into the issue that things seem to get resolved, sometimes after weeks and weeks.

I once had an ADSL connection in Sydney which had functioned fine for years. Suddenly it died, and nobody could tell me why — not iiNet, not Telstra, not anyone. Finally, after weeks of support calls, a senior Telstra engineer walked into the company’s local telephone exchange and realised that a cable (probably my cable) had fallen out of its socket. He plugged it back in, and voila — problem solved.

I think the NBN’s Fixed Wireless network is going to be very much like this.

And if someone could provide us with a conclusive answer as to whether trees actually impact on the Fixed Wireless signal, that would be great.