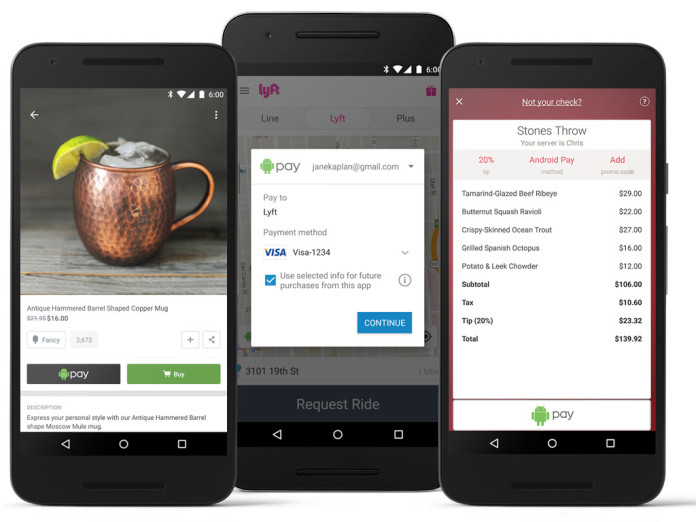 news Google has announced that it will be be bringing its digital wallet Android Pay to Australia in the first half of 2016.

The news comes hot on the heels of Apple’s announcement that it’s payments app Apple Pay is live in Australia, but notably looks likely to include more financial partners.

Google said it is working closely with many of Australia’s major financial institutions with the aim of bringing Android Pay to their card holders in 2016, and will continue to work with more banks throughout the year. Currently it is working with ANZ, Westpac, Bank of Melbourne, Bank of South Australia, Bendigo Bank, Cuscal, ING DIRECT, Macquarie Bank, and St George Bank.

When Android Pay arrives in Australia next year, it will support MasterCard and Visa credit and debit cards. The tech and search giant is also working with eftpos to support their cards in Android Pay.

Australians will be able to use Android Pay at any merchant where contactless payments are accepted and Google said it a wide range of retailers are getting involved to support the launch of Android Pay, including 7-Eleven, Brumby’s Bakery, Coles Express, Coles Supermarkets, Crust Gourmet Pizza, Domino’s Pizza Enterprises Limited, Donut King, Gloria Jean’s Coffees, McDonald’s, Michel’s Patisserie, Pizza Capers, and Telstra.

Android Pay also facilitates fast checkout within apps and removes the need to enter payment or address details every time a purchase is made. At launch, the firm expects this feature to be available in many Aussie apps — including Catch of the Day, EatNow, GoCatch, Kogan.com, Menulog, OzSale, Rewardle, and The Iconic.

You can visit the Android Pay API developer site to learn how to accept Android Pay for the purchase of physical goods and services in your app. We’re partnering with developers like LOKE and Marketplacer to bring Android Pay to apps from favourite brands like Burger Edge, House of Home, and Messina.

Google said it is also working with major payment providers such as Braintree, eWAY, First Data and Stripe to make accepting Android Pay across stores and apps much simpler.

In order to keep customers’ personal and financial data safe, Android Pay is supported by industry standard tokenisation, which means credit or debit card numbers aren’t shared with the merchant. As soon as a purchase is made, a payment confirmation indicates where the transaction happened, making it easy to catch any suspicious activity.

Should a phone be lost or stolen, Google’s Android Device Manager can be used to instantly lock the device from anywhere, enter a new password or even wipe it clean of personal information.

The news follows Apple’s recent announcement, that Apple Pay – the Cupertino firm’s equivalent app – is now live in Australia. However, Apple has been criticised for the few banking partners available via the system, and for having only one credit card partner – American Express.

Ed Husic MP said on 3 December that Australian consumers are being denied payment choices over the banks’ apparent “boycott” of Apple Pay and called for regulation to avoid consumers suffering from the possibly anti-competitive actions of some financial institutions.

Reserve Bank of Australia Governor Glenn Stevens has since claimed that he has not seen “any evidence” that Australia’s major banks are actively boycotting the Apple Pay mobile payments service.