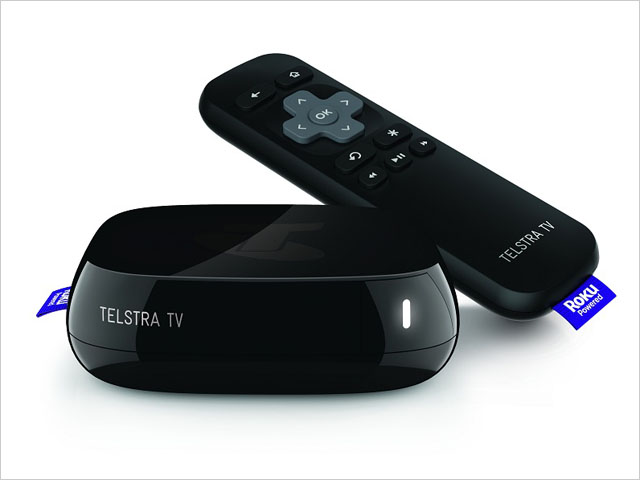 news The nation’s largest telco Telstra has revealed it essentially give away its Telstra TV-branded Roku box to its customers, aiming to drive rapid adoption of the platform’s Internet television streaming capability.

The telco first announced the Telstra TV in late July this year. The platform — a re-badged Roku set-top box — allows Telstra customers to access a wide variety of online television platforms, including Presto, Netflix, SBS on Demand, YouTube, Vimeo, Crunchyroll and more. It also allows Telstra customers to rent films from BigPond Movies, and Telstra is planning to add the Australian streaming service Stan to the platform in November.

In a statement issued last week, Telstra noted that the Telstra TV would be available for purchase in Telstra stores nationally and online from 27 October 2015.

The device will formally be priced at $109, but Telstra will include it as part of some of its higher-end L and XL broadband bundles. In addition, Telstra customers who take up a Telstra TV before 25 December will receive a $15 BigPond Movie voucher, a bonus three months subscription to Presto and a bonus three months subscription to Stan, when Stan becomes available in November. The value of this offer comes close to the device’s formal $109 price.

The unit features a Dual ARM A9 1GHz CPU, 512MB RAM, a 256MB Flash storage drive, a HDMI 1.4 port for outputting signal to a TV, and a remote for controlling the unit. BigPond Movies and Presto will be unmetered in terms of customers’ broadband data quota, but the other platforms’ data usage (eg Netflix and Stan) will still apply when used through the Telstra TV box.

“Telstra TV puts our customers in control of what they watch and gives them even greater value entertainment choices in the home,” Pollard said. “Whether you love to binge watch the latest television series, enjoy a family movie night, or catch up on free to air shows you missed during the week, Telstra TV is the simple way to stream your favourite television on demand.

“The powerful combination of our world-class networks and quality, differentiated content, and ease of use give our customers an entertainment experience that is truly world class.”

Andrew Ferrone, Vice President of Pay TV at Roku said: “We are very excited to unveil Telstra TV, which is powered by Roku, and give Australian consumers a simple and flexible way to stream their favourite content direct to their television. With Telstra TV, consumers have more choice and control over what they watch and when they watch it.”

opinion/analysis
This is what I wrote in July, and very little has changed from last week’s Telstra announcement:

“What I think we’re seeing here is a panicked reaction from Telstra to the almost overnight success of the Netflix Internet television platform launching in Australia.

Netflix only launched in March, but stats from Roy Morgan research show the platform already has more than a million local customers — more than ten times the number of any other Internet streaming service in Australia. And this huge customer base is only set to grow — I wouldn’t be overly surprised if it doubled by the end of this year.

Firstly, it puts the limited success that Telstra has had with platforms such as BigPond Movies and the T-Box into perspective. Although the company has signed up quite a few Telstra customers to these add-on products, bolstering its underlying margins, there is no doubt that the overnight success of Netflix dwarfs these gains. There is also a huge risk for Telstra that its customers will start ditching the T-Box and BigPond Movies for the more agile Netflix offering.

Secondly, the success of Netflix entails huge potential financial losses for Telstra. The company’s fixed-line broadband profits are based on the assumption that almost all customers will not use the full download quota they are paying for. The more bandwidth Telstra customers download on their existing plans — and Netflix use sends bandwidth usage sky high — the more Telstra pays in terms of its own bandwidth costs, and the more its margins shrink.

Telstra’s extremely rapid launch of a re-badged Roku box in Australia is no doubt a tactic to deal with these issues — keeping customers on a Telstra set-top-box platform which allows Telstra to continue to market its own value-added entertainment services and pitch Foxtel Presto at customers as well. I also strongly suspect that Telstra will be pressuring Netflix behind the scenes to start paying cash money for the impact it’s causing on Telstra’s network.

However, this is a very short-sighted launch. The real issue for Telstra is not Netflix, and it’s not the T-Box. Re-badging Roku for the Australian market won’t solve its problems.

The real issue for Telstra is that it is struggling to reconcile its investment in Foxtel — Australia’s largest content delivery platform — with its own mission selling telecommunications.

The solution needs to come in two parts. Foxtel must firstly come up with a way to stop losing customers and potential customers to Netflix. Netflix is a real and present threat to Foxtel, and so far Foxtel’s own online offerings have failed to address that threat. Bundling them with Telstra services is not going to help that situation.

When Foxtel has done that, Telstra must work closely with Foxtel so that customers are heavily incentivised to purchase both Foxtel and Telstra in lock-in bundles that they will never want to escape. The pair already do offer solid packages. But they’re primarily attractive to families with a lot of money to spend — the younger Netflix generation is not that keen. Telstra and Foxtel need to work out a way to target that generation better.

The nasty thing for both Telstra and Foxtel is that this is going to necessarily involve giving up some of the fat profits they’ve come to enjoy for the past two decades of partnership. But here’s a reality check: Netflix has changed the game. Telstra and Foxtel cannot hang onto the past.

The option that Telstra appears to be pursuing right now is to try to offer a Roku bundle with Netflix, Stan and Presto to customers for less than $30 a month. This will be a decent effort if Telstra can pull it off.

But I don’t think it represents the end game. That will require some deeper thinking about the fundamental relationship between Foxtel and Telstra. Nothing I’ve seen from Telstra so far indicates the company has yet gotten that right.”