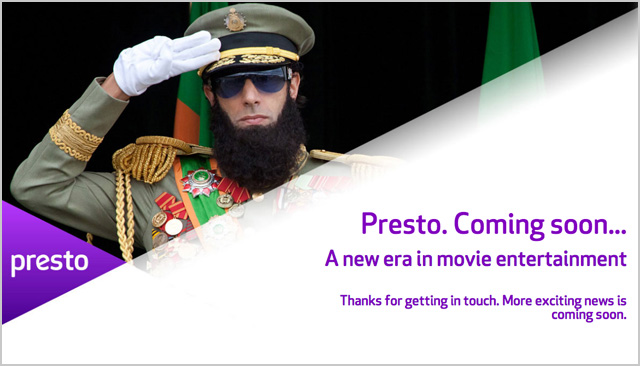 in brief In late September last year, national pay TV giant Foxtel announced a new online service dubbed ‘Presto’, which was to see consumers charged $24.99 per month to access “a regularly updating collection of great films”, all streamed through the Internet, as opposed to its existing pay TV platform.

In a statement issued at the time, the company said Presto’s launch, slated for later last year, “aligns perfectly with the increasing appetite for movie content delivered over the internet across different devices”. It will feature content already licensed to the Foxtel Movies channels, including access to “the biggest box office releases of 2012 at launch along with on demand access to the Foxtel Movies vault of recent and older favourite movies”.

However, according to the Financial Review (we recommend you click here for the full, paywalled article), the launch of the service has already been delayed. The newspaper reports:

“Foxtel’s online movie streaming service, Presto, has failed to launch and will be delayed by up to two months because of software bugs.”

The news comes as rival service Quickflix (which also offers online DVD rental) has continued its recent growth. The company said in a statement issued last week that it had added over 10,000 new customers and was experiencing strong demand for its streaming service. Total active customers increased by 10 per cent to 120,800 in the quarter including 18,552 people trialling the service.

The company said the momentum of its IPTV streaming service continued to build in the quarter to the end of December, with the numbers of hours streamed increasing by 23 per cent over the previous quarter. The level of streaming was 40 per cent higher than the equivalent period in the prior year. New platforms launched during the quarter including PlayStation 4, LG Smart TVs, TiVo and Amazon Kindle Fire added to the demand.