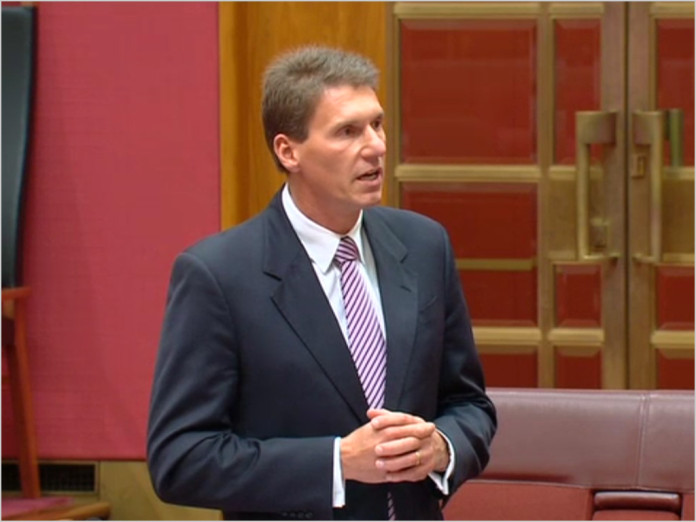 news Conservative Liberal Senator Cory Bernardi has labelled the performance of his his new National Broadband Network fibre connection as “quite amazing”, but has slammed the NBN company for a bungled installation which required repeated visits to get the connection running.

“I consider myself very fortunate to be in an area where the early rollout was implemented as it is a very good service,” Bernardi wrote. “With a family who always seem to be online for homework, entertainment and other assorted internet demands, the speed and bandwidth available from the NBN are quite amazing.”

However, the Senator heavily criticised the practical aspects of getting his premises connected to the NBN’s fast fibre.

“What wasn’t so amazing was the process of having it connected,” he wrote. “It demonstrated to me just how inefficient (hopeless is actually a better word) government funded projects actually can be. I have no doubt there is some complexity to the installation of fibre optic cable and the assorted technology connections, but my experience with the NBN installation was a monumental tribute to waste.”

Bernardi said that by his count, there had been no less than five inidvidual visits to his house by different personnel to get the NBN’s fibre connected, meaning that a member of his family had to be at the house on multiple occasions to facilitate the connection.

“When the cable and assorted boxes were finally installed, we were told it was ready to go and contacted Telstra to organise connection and transfer our account,” the Senator wrote. “At this point we were told we had to plug the connection cables in ourselves or wait two months for a technician to be available.”

“Being someone who has been described as ‘useless’ when it comes to technology, I tried to follow the instructions but couldn’t make it work. We informed Telstra of this multiple times to ensure our existing phone and internet service was maintained. The support team in Bangladesh assured us it would remain connected until the issues were rectified.”

“Our existing services were cut off despite the assurances, with no way of having them reconnected until the problems were rectified,” he wrote.

“With the prospect of a two month wait for a technician to arrive, I chose to contact a private operator who came the following day. He spent two hours trying to get the system to work with no success. We then called Telstra technical support as a last resort. After nearly 30 minutes on the telephone it was determined that there was a connection fault with the NBN fibre optic cable which would require another party to rectify. They were available for an appointment a couple of days later.”

“They arrived, fixed the problem and we now have fast and reliable internet for which I am grateful, but my experience has reinforced my concerns about government waste and bureaucracy.”

Bernardi said he knew the NBN wasn’t technically a government service as it operated as an independent company. However, he said it, it was budgeted to use billions of dollars of taxpayers’ money — and the company had recently revealed billions of dollars in cost blow-outs.

“Having seen the process first-hand, I have seen the inefficiency for myself,” Bernardi wrote.

“The NBN is a massive project, concocted by a former government with next to no due diligence. In fact it was conceived on the back of a coaster whilst flying in the Prime Minister’s jet. Now we are paying for it. Based on my experience with the inefficient process, that cost is much more than it need be. But isn’t that the way of so many government funded projects?”

Firstly, it’s important to note that Bernardi acknowledged the speed of the NBN was “amazing”. For one of Australia’s most conservative politicians to make this concession regarding the NBN is quite a step — often the Coalition has been quite critical of the NBN’s speeds, labelling them unnecessary. However, Bernardi praised the service. This indicates the potential that full fibre rollouts have to influence MPs’ thinking when they experience the potential of the technology.

It seems obvious that Bernardi wasn’t quite happy with the quality of his home’s previous broadband connection and is more than happy with his new NBN speeds.

Secondly, I note that Bernardi’s poor experience with the NBN company’s connection protocols is not unusual. I don’t support his move to link this to the NBN company’s nature as a government initiative, but it is objectively true that the company is struggling to get its connection process to function as expected. I’ve heard many stories along these lines, and the NBN company needs to continue to pull up its socks on this issue.

Lastly, I would note that Bernardi’s comments on the NBN can also be interpreted as a coded attack on Communications Minister Malcolm Turnbull, one of the most progressive members of the Liberal Party and an ideological opposite of Bernardi in the Liberal Party party room. Bernardi’s not a huge fan of Turnbull, and I wouldn’t be surprised if he was using this attack on the NBN as a proxy for a jab at Turnbull.

Of course, ultimately many NBN supporters would view this post by Bernardi as a typical Coalition attack on the NBN.

However, I personally view it as broadly positive for the project. Bernardi explicitly acknowledged the benefits of the NBN’s fibre technology, and correctly identified the NBN company’s issues in getting customers connected. If you dismiss much of the rest of his comments as ideologically positioned in terms of his general philosophical view on the need to avoid government waste and intervention in the private sector, then much of his post makes common sense.