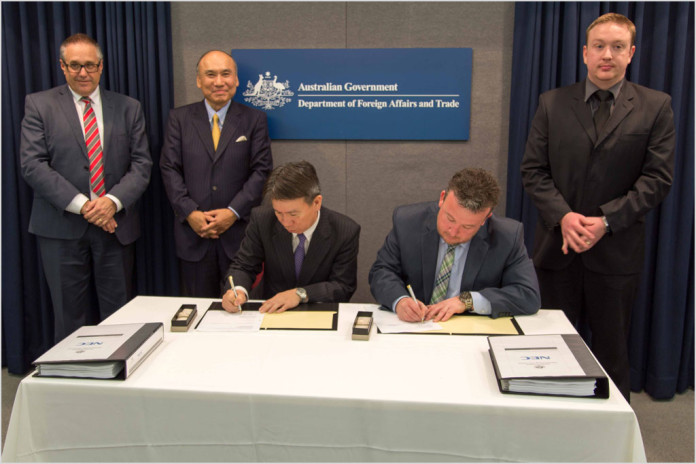 news The local arm of NEC today revealed it had picked up a $36.6 million contract to operate the Department of Foreign Affairs and Trade’s ICT support desk, in a deal which would appear to knock incumbent supplier and fellow Japanese technology giant Fujitsu off its perch.

In October 2013, DFAT kicked off a huge outsourcing initiative which was at the time slated to see several hundred million dollars ploughed into a substantial upgrade of the department’s far-flung global fundamental IT infrastructure, including both telecommunications and desktop platforms.

One of the contracts on offer dealt with ICT support services. The Department appeared to be putting out to public tender a contract which it had signed with Fujitsu back in 2009 for some $6 million. the deal involved supporting some 6,000 Government staff located globally.

However, this morning NEC announced that it had picked up the deal. The Government’s Austender site reveals it is worth some $36.6 million.

Under the four-year contract, NEC said, it will assume responsibility for DFAT’s Global Support Centre Services, supporting 12,000 users at 160 sites globally. Many of those staff are employed by DFAT directly, but the agency also delivers ICT services to over 51 other agencies, courtesy of its far-flung operations.

“NEC Australia is committed in this project to improving the end user experience of department and agency users and we are confident that we can deliver the required outcomes,” said Mike Barber, Executive Director of IT Services at NEC Australia.

NEC noted it holds ICT contracts with a number of other large public sector clients in Australia, including the South Australian Government, Northern Territory Government, the Department of Defence and Department of Parliamentary Services. In total across its entire customer base, NEC already manages more than 4,800 servers, 75,000 desktops and over 500,000 end-points at 1,340 locations across Australia.

“Our record for service excellence and close cooperation with existing partners in Federal and State Governments is evident within our long list of existing customers,” said Tetsuro Akagi, Managing Director, NEC Australia.

“In order to maintain this leading reputation, we continue our investment in advanced systems and processes. These investments build on our existing capability and experience to ensure we can deliver results,” Akagi added.

opinion/analysis
Nice win here for NEC, which is emerging as a bit of a growing player in Australia’s fairly mature IT services market. This win will be particularly galling for Fujitsu.