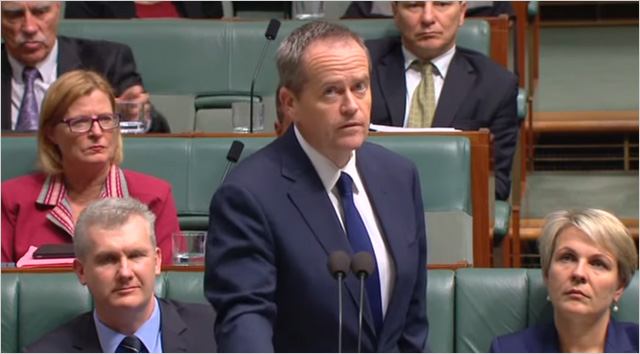 opinion/analysis There is absolutely no doubt that the Australian Labor Party will abandon its Fibre to the Premises National Broadband Network plan and adopt the Coalition’s alternative Multi-Technology Model as official policy before the next Federal Election.

If we’ve learnt anything about the Australian Labor Party since the party lost power almost two years ago, it’s that much of modern Labor has become focused on pragmatism, subduing the idealistic past that it evinced as recently as the days following Kevin Rudd’s landmark election victory in 2007.

You only have to cast your eye back over the past six months to see this trend in action. It was Labor who waved through the Parliament undemocratic laws that would see journalists jailed for merely reporting on botched intelligence operations, Orwellian laws to retain the telecommunications data of the entire Australian population, and ineffective laws that will give Australia its newest Internet filter.

Labor even lowered itself to pass laws significantly reducing Australia’s renewable energy target, laughably including the burning of wood as a “renewable energy source”, and who could forget the odious Australian Border Force Act which will see doctors thrown in jail for fulfilling their duty of care to report abuse of asylum seekers. What a corker.

The list of things which Labor won’t pass, it appears, is desperately slim. It notably includes bills which would see a Federal Independent Commission Against Corruption established.

Sure, you can argue that not all Labor MPs have completely lost all perspective. Familiar and friendly faces such as Anthony Albanese, Ed Husic and Melissa Parke have done a great deal of handwringing about a number of the above pieces of legislation, and can be expected to speak up about further controversial issues in future. We’re thankful for this display of common sense and decency.

Of course, nobody from the Labor side of politics actually voted against the legislation they disagreed with, leaving the parliamentary crossbench to fulfil the role of actual Opposition in each case. One wonders how often the Greens consider themselves to be living in the twilight world these days, teaming up with ideological opposition in the form of the IPA and Liberal Democrat David Leyonhjelm to promote the basic human right of not being spied upon 24×7.

(Of course, for all of its virtues and often-rational behaviour, our Federal crossbench has its own crosses to bear. Few Australians would countenance the often-sensible Sen. Leyonhjelm’s mis-targeted war on wind farms and gun regulation, while not everyone agrees that the Greens’ opaque process of electing their new parliamentary leader has its basis in the party’s vaunted ‘grassroots democracy’.)

Given all of this, does anyone seriously expect Labor not to fall in line with the Coalition on yet another issue — the NBN — as it heads towards the polls?

The reasons which will be given inside the party for such a momentous — and to Kevin Rudd and Stephen Conroy, monstrous — capitulation are stark and almost unarguable within Labor ranks.

Shadow Communications Minister Jason Clare will gravely inform the Labor caucus that it would be “almost impossible” to unwind the complex deal which the Coalition and nbn have just spent two years renegotiating with Telstra. Nobody, Clare will say with sincerity, wants to revisit that arrangement for a third time. Senator Penny Wong, who as Finance Minister lived through the mammoth three-year effort to get that deal done the first time around, will nod her head sagely.

Clare will subsequently point out that the trials of HFC cable and Fibre to the Node technology are well advanced, and that, again, it would be “almost impossible” to turn the ship around mid-course and halt nbn’s deployment of such infrastructure. Even if Labor wanted to, Clare will argue, there are higher priorities that will affect Labor’s election prospects more directly. It’s better just to look ‘safe’ on the NBN — as on national security, asylum seekers, and so on.

No doubt Malcolm Turnbull will spend as much time as possible in the pre-election period spruiking nbn rollouts in every possible marginal seat, just as Labor did directly before the 2013 poll, giving Clare plenty of ammunition to make this case inside Labor.

Then too, the Labor faithful will have been well gulled by this time by the constant and incessant massaging of the public message around broadband speeds that nbn has been faithfully carrying out, in a sickening cheer squad effort devoted to “selling” an unwilling public on Malcolm’s Multi-Technology Mess.

There are huge technical differences between the new MTM technologies — the obsolete and outdated HFC cable and Fibre to the Node options — which means that in the long or even medium terms they will come to be completely eclipsed by the Fibre to the Premises model.

But this will hardly matter to the Labor faithful when the Financial Review — that staunch proponent of technical accuracy — is pumping out headlines like “HFC NBN will be as fast as Labor’s FTTP”, fuelled by persuasive statements by nbn CEO Bill Morrow about how HFC will “go head-to-head with Fibre to the Premise” and deliver “amazing speeds”. And it doesn’t take a genius to work out what front pages News Limited will deploy across its necropolitic stable if Labor puts a pre-election foot wrong on the NBN.

Then too, Labor has hardly put its best foot forward in the Communications portfolio over the past several years.

Clare himself is a highly competent and seasoned parliamentary performer as well as a decent person. I respect and like the man and his staff, as I do many within all sides of politics, and I’d like to see him retained in the cabinet in a senior role the next time Labor takes power.

But unlike colleagues such Husic, Michelle Rowland, the now-retired Kate Lundy or Conroy himself, Clare doesn’t have a natural passion for and interest in the Communications portfolio. He has never seriously given Turnbull a run for his money as Minister. Ultimately Clare is destined for other things than being teased by the Earl of Wentworth in Question Time for neglecting to ask him the thorny ones.

While Clare has kept Labor in the game on Communications over the past two years, nobody would expect the Member for Blaxland to put his reputation on the line by going up against one of the most popular politicians in Australia and dying in a ditch for a FTTP NBN policy which many people believe has already had its day in the sun.

The main opposition Clare will face to watering down Labor’s NBN policy will come from Conroy himself, likely with some assistance from Husic and Rowland. Although Clare formally holds the portfolio for Labor, it’s been Conroy who still holds most of the reigns of influence inside Labor when it comes to the project.

Conroy’s been fighting a lone battle to defend his legacy in the NBN Senate Select Committee for the past two years, but may find his liberties curtailed by the Committee’s new chair, Senator Jenny McAllister. Although the new chair is a novice Senator, Sen. McAllister is a former ALP National President who’s probably well-versed at dealing with party heavyweights like Conroy.

In addition, one has to wonder how much fight the greying Victorian Labor Right factional warlord still has in him these days. His compatriot Kate Lundy, who joined the Senate with Conroy almost 20 years ago in 1996, has already left the building. How long before Conroy decides to take his annual salary for life and head for a quiet existence influencing preselection in suburban Melbourne? Does the former Communications Minister have the energy to keep the FTTP vision alive?

In a certain sense, this article is actually quite redundant.

Although it hasn’t yet released its new formal NBN policy, Labor has already given several clear indications that it’s about to abandon its FTTP policy. Clare himself openly told the Communications Day NBN Rebooted conference in November that Labor could not switch the NBN back to a FTTP model if it won power.

The situation was completely cleared up when the party released its draft National Platform in May. The document outright deleted all mention of 93 percent of Australians getting FTTP, instead inserting an onerous note that fibre was “the end game” and would need to be built in “two stages rather than one”.

In the next few months, Clare and his team will be spending a great deal of time “drafting language” and “developing positioning” to plan the precise steps which will see Labor fall completely into line with the Coalition’s MTM policy. It will no doubt feature a heavy emphasis on avoiding the words “Fibre to the Node” and “HFC cable” and stress how, at some vague time in the future, Labor plans on extending Turnbull’s vision to full FTTP.

But that extension will necessarily come at a very far off point in the future, well into the next decade. By that time, Labor will have had ample time to further water down the ambitious broadband strategy developed by the visionary Rudd and Conroy even further.

This shouldn’t come as a surprise. After all, watering down promises is what politicians do best.