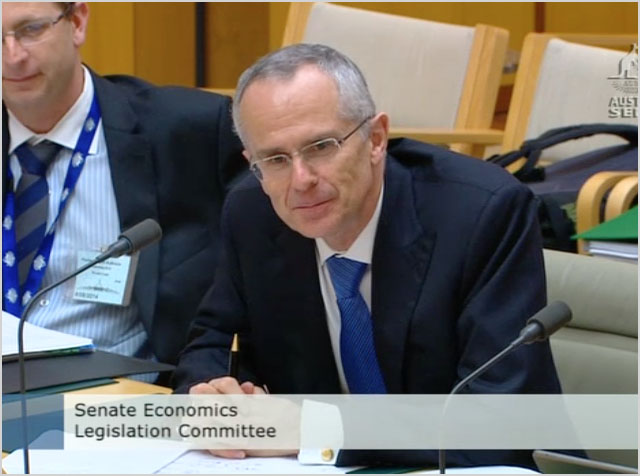 news The head of the Australian Competition and Consumer Commission this morning said NBN Co would be “misleading” consumers on its planned Fibre to the Node or Basement (FTTN/B) infrastructure if it went through with its decision to allow them to order speeds between 50Mbps and 100Mbps which their connections could not actually deliver.

Early trials of the deployment model has shown the FTTN infrastructure capable of delivering raw download speeds of 105Mbps over a distance of 100m from a local test node, while the FTTB trial has delivered speeds of 90Mbps.

In its document, NBN Co noted that it planned to offer five speed tiers for the FTTN/B infrastructure — 12/1Mbps (download/upload), 12/5Mbps, 25/10Mbps, 50/20Mbps and 100/40Mbps. These tiers mimic NBN Co’s existing speed tiers for its Fibre to the Premises infrastructure. However, NBN Co noted that selecting the correct speed tier would be “the responsibility of the end user and the provider”.

In a Senate Estimates hearing this morning, former Communications Minister and Labor Senator Stephen Conroy asked ACCC chair Rod Sims for his opinion on the matter.

“If in ideal conditions, a [Retail Internet Service Provider or RSP] determines that it can deliver a VDSL service of say 38Mbps to an end user, would it be appropriate for an RSP to market that product as an up to 100Mbps service?” asked Conroy. “Well, the circumstance that you’re describing, if I accept the facts as you put them, Senator, would suggest that’s misleading,” responded Sims.

Conroy also asked Sims again to confirm if, under Australian law, it would be “misleading and deceptive” for a RSP to sell a customer a 100Mbps product when the RSP was aware that it could only provide a service of 38Mbps, and the RSP had a product it could sell at up to 50Mbps.

“That would at its face, given those facts, be misleading,” Sims responded again.

Conroy then read out the specific section from NBN Co’s consultation paper dealing with this issue, with Sims confirming that the ACCC had seen the document. “This is NBN Co in writing, saying we don’t mind if you defraud Australian consumers,” Conroy said. “This is NBN Co itself stating that they don’t mind selling a service of up to 100Mbps, when they know the typical experienced speeds are less than 50Mbps. That’s just fraud.”

The ACCC has previously warned the telecommunications industry that it was specifically examining the issue of speed claims. In August 2013, for example, the regulator released a consultation paper inviting comment on a proposed program for monitoring and reporting broadband performance in Australia. Similar programs have been implemented in several international jurisdictions including the United Kingdom, United States, Singapore and New Zealand.

“A program of this type could benefit internet service providers and consumers of broadband services in Australia. Information on real-world performance would help consumers and small businesses choose the right service for their needs and budget, and help them to identify whether they are receiving the service quality they were promised,” ACCC Commissioner Cristina Cifuentes said at the time.

opinion/analysis
It’s not surprising that the ACCC would view NBN Co’s proposal here as deceptive. I’ve been covering Australian telecommunications for a decade now, and this is definitely the kind of move which the ACCC is always — always — interested in. NBN Co is, ultimately, a telco like any other, and the ACCC is not the kind of regulator to look the other way when a telco takes active steps to deceive customers. My broader views on the situation, as I wrote in early May, are as follows:

“It is my clear opinion that NBN Co should not be allowed to advertise broadband services either to retail ISPs or end user customers without being able to deliver those speeds. I believe this would be a contravention of the Trade Practices Act and would speedily attract the attention of the ACCC.

We’re also seeing the culture of NBN Co change significantly here. I cannot imagine NBN Co under its previous management canvassing the possibility of openly deceiving its end user customers with regard to their broadband speeds. The fact that the company is now doing so under its new management speaks volumes about how it has changed in just a few short months. No wonder we’re seeing a huge management and staff exodus. I wouldn’t stand for this kind of crap either.”