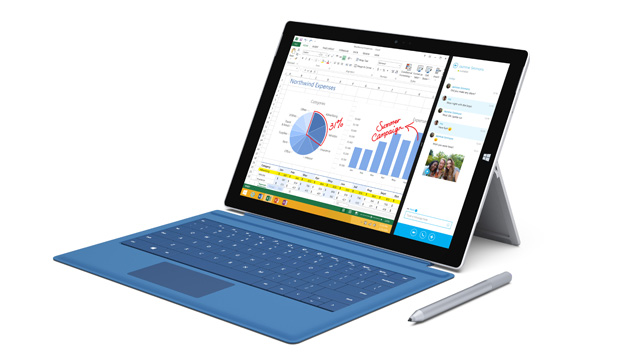 news US technology giant Microsoft announced this morning that its Surface Pro 3 tablet — unveiled in New York overnight — would start shipping in Australia from the end of August, with Microsoft itself, Harvey Norman and JB Hi-Fi to sell the unit for prices starting from AU$979.

Microsoft is billing the Surface Pro 3 as an integrated device that can replace a laptop. It features a 12″ display (most tablets feature a display several inches smaller), a “continuously adjustable kickstand”, improvements to processing power (featuring various Intel Core i3, i5 and i7 processors) and upgraded cameras. The unit weighs 798 grams.

The Surface Pro 3 also comes with Microsoft’s all-new Surface Pen, cased in aluminum and with 256 levels of pressure sensitivity for a “smooth and precise writing and drawing experience”. Microsoft said this morning that the pen looks and feels like a real fountain pen. Microsoft has also produced a new, larger version of its Type Cover with an improved trackpad experience. The cover can be paired with the tablet so that the Surface Pro 3 delivers laptop-like functionality.

The Surface Pro 3 will be available in a number of different configurations, including Intel’s Core i3, i5 and i7 processors, with storage space starting at 128GB and ranging up to 512GB, and with RAM available being either 4GB or 8GB.

“So many people carry both a laptop and a tablet but really want just one device that serves all purposes,” said Panos Panay, corporate vice president, Microsoft Surface. “Surface Pro 3 is the tablet that can replace your laptop — packing all the performance of a fully powered laptop into a thin, light and beautifully designed device. You’ll love being able to carry a single device for your next class, workday or weekend getaway knowing you have all the power you need.”

Globally, Microsoft said that companies such as BMW Group, The Coca-Cola Company and LVMH – Moët Hennessy Louis Vuitton had already committed to purchasing and deploying the device as one of the choices inside their organisations. “Surface Pro 3 is a truly innovative device that will replace both a tablet and a powerful laptop,” said Mario Müller, vice president IT infrastructure, BMW Group, in Microsoft’s statement.

The unit runs Microsoft Windows 8.1 — the full version of Microsoft’s operating system, and not the Windows RT version which had attracted criticism on some Surface models.

US gadget sites such as The Verge have largely delivered early praise for the Surface Pro 3, writing that there is a “a lot to like” about the new Microsoft tablet. Its main competition will be Apple’s dominant iPad tablet and the Galaxy Tab and Note series of tablets which Samsung ships.

However, in Australia, major organisations have expressed a moderate degree of interest in the Surface as part of their corporate fleets. For example, in November last year, minor Federal Government agency the Australian Transport Safety Bureau revealed plans to refresh its staff PC fleet not with laptops, not with desktop PCs, but with Microsoft’s Surface Pro 2 tablet, in one of the first known deployments of its kind in Australia.

opinion/analysis
Do I think the Surface is going to take off in Australia in general? Definitely not in the consumer market, but I do think Microsoft will see a degree of traction with the Surface Pro in the enterprise market, courtesy especially of its existing Windows install base and the integrated tablet/laptop nature of the Surface line. I’m already seeing small bites along these lines and I expect to see more soon. It also helps that neither Apple nor Samsung are as enterprise-friendly as Microsoft.