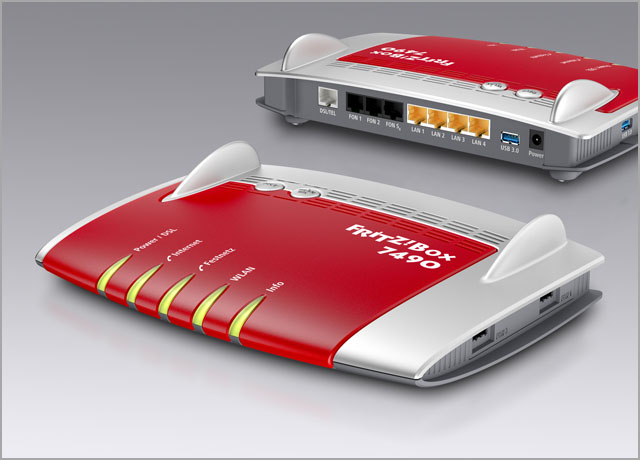 news Australian distributor PCRange this week revealed it had started distributing a new top-end model in the popular FRITZ!Box range of high-end ADSL routers, with the model supporting the long-awaited 802.11ac standard.

Previously PCRange had distributed the 7270, 7272 and 7390 FRITZ!Box models in Australia, especially using relationships with ISPs such as Internode to to so. The routers are notable because of their high-end featureset compared with the routers offered by rival companies and have thus proven popular in Australia’s early technology adopter and IT community.

In a statement released yesterday, PCRange noted that it would introduce the FRITZ!Box 7490 router into the local market from next month (April).

Designed and manufactured in Germany by AVM, the “fibre-ready” ADSL2+ broadband router includes AC Wireless networking, four 1Gb LAN ports and two USB 3.0 ports. It also contains an integrated telephone system and media server. It goes for the similarly high-end price of $429 and will be distributed exclusively through PCRange’s national network.

As well as gigabit Ethernet, the FRITZ!Box 7490 supports the iEEE 802.11ac WLAN standard, capable of 1300 megabits per second (Mb/s) data throughput in the 5Ghz band and 450 Mb/s in the 2.4 frequency band. AC Wireless is backward compatible with older 802.11a/b/g/n wireless devices.

The 7490’s built-in telephone system contains multiple answering machines, a DECT base station for as many six cordless handsets and connection options for analog and VoIP telephone handsets. The new unit also provides a “powerful media server” that can stream images, videos and music throughout your home network, “whether data is stored locally or in the cloud”.

PCRange chief executive Raaj Menon described the FRITZ!Box 7490 as “simply brilliant”. “The 7490 is the bee’s knees for broadband and home networking,” he said. “With AC Wireless and USB 3.0, it has all the latest features that people have asked for over the past year, so we expect it to sell like hotcakes. Our resellers are already getting orders.”

opinion/analysis
The Delimiter office currently utilises a FRITZ!Box 7390 (currently as a second router for internal network distribution), which has provided very solid levels of both ADSL2+ and internal LAN and WLAN connectivity for several years. However, the 7390 notably does not come with 802.11ac support. We’re very glad to see this standard make it to the excellent FRITZ!Box series in the 7490.

We haven’t reviewed this model, but we strongly suspect this is now the best ADSL2+ router available in Australia, or at least a contender for that position. The quality and versatility of the FRITZ!Box series has always stood it in very good stead compared with much of the rest of the ADSL router market, which tends to focus on keeping prices low rather than on quality and features. Let’s hope the 7490 stays true to the FRITZ!Box ethos.