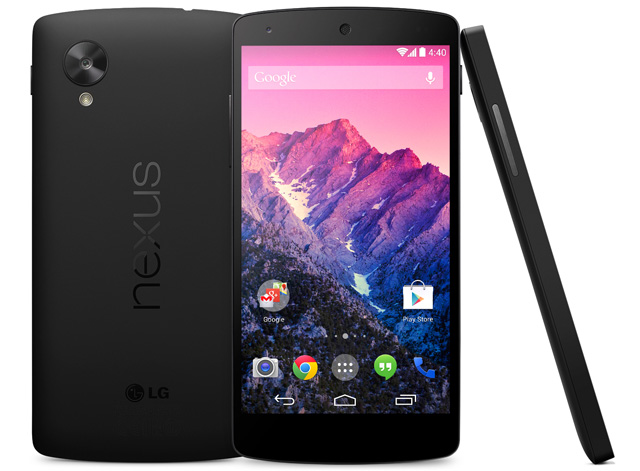 hope you’re having a great week! Personally I am trying to get all my work done as quickly as possible so I can get out in the beautiful Sydney sunshine for a run … but it’s not quite working out as planned just yet ;)

As you may know, we’re big fans of Google’s Nexus line-up in general here at Delimiter towers. Nexus 4, Nexus 7, Nexus 10 … we love pretty much anything Nexus. That stock Android experience, those smooth plastic lines, those lovely high-definition screens. The Nexus devices are usually right at the top of the Android food chain.

Because of this, and because we’re seeking to boost our newsletter subscriber numbers, today we’re kicking off a new competition to give away one of Google’s new Nexus 5 smartphones. This is the model which was released last year — we’re giving away a brand new 16GB black unit (pictured). We haven’t done a review of this particular handset, but we’ve had a chance to check out this model for ourselves, and it’s very, very sweet. You can read The Verge’s review of the Nexus 5 online here.

So what do you have to do to have a chance to win this baby? To enter the competition, all you have to do is sign up for our weekly Friday “Best of the Week” newsletter before 30 April. After that date, we’ll pick a name out of a hat and contact that lucky reader to send them their new Nexus 5. Full terms and conditions here.

Note that by signing up to one of Delimiter’s newsletters, you also agree to receive commercial (tasteful) emails from our sponsors from time time. We don’t give them your data though — they’re sent from our system. In our busiest periods this will likely be one per week, in quiet periods (like January, for example), it’s usually none. If this annoys you, it’s a one-click unsubscribe at any time.

Let the games begin — and good luck! We have to admit to being a little jealous of the eventual winner ;) If you don’t win, don’t worry — we regularly give away new gadgets. We’ve done several draws for the iPad mini and Nexus 7 in the past, and will doubtless have more competitions coming this year :)