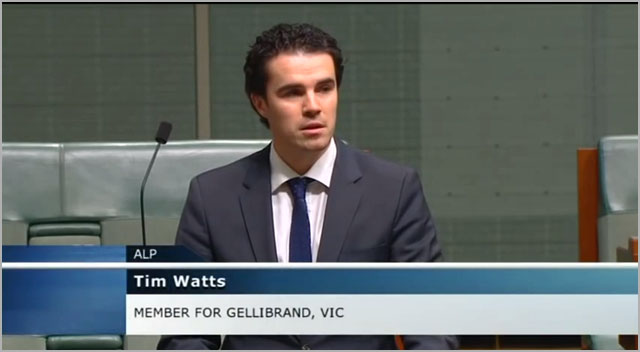 news The Australian Labor Party’s silence on the Australian Law Reform Commission’s propsed reforms to the Copyright Act has been broken by Tim Watts, a first-time MP who told Parliament late last month that he supported the US-style “fair use” doctrine supported by the commission, which the Coalition has not yet indicated it will support.

On 29 June 2012, the previous Labor Administration asked the ALRC to consider whether exceptions and statutory licences under the ageing Copyright Act 1968 were adequate and appropriate in the new digital environment of the Internet and whether further exceptions should be recommended. The resultant review has been published online in full in PDF format. It is an extremely lengthy document — consisting of some 478 pages — and it is likely that it will take many months for Australia’s legal and regulatory community to process its recommendations.

However, of great interest to those interested in digital rights in Australia will be the ALRC’s recommendation of a fair use exception to the Copyright Act. ‘Fair use’ is a doctrine commonly used in other international jurisdictions to refer to use of copyrighted works that do not require explicit consent of the copyright holder, while still recognising the rightsholder’s rights. Fair use is often used to allow criticism of a work, reporting about a work, teaching or scholarly research.

In its report, the ALRC wrote that it “recommends the introduction of fair use” for a number of reasons, including the ability of the doctrine to facilitate public interest in accessing material, encouraging new productive uses and stimulating competition and innovation.

Following the release of the review, Attorney-General George Brandis gave a major speech to a content industry gathering noting that he remained to be persuaded that Australia needed a fair use clause in its copyright law. Shadow Attorney-General Mark Dreyfus has not yet published Labor’s response to the ALRC’s review. It is believed that there are divisions within Labor ranks about whether the fair use provision would be a positive move for Australia or not.

Tim Watts — a former policy advisor to Communications Minister Stephen Conroy when in Opposition and a regulatory affairs manager for Telstra — told the chamber that the current fair dealing exemptions in the Copyright Act were “narrow and prescriptive”.

“For copyright reform advocates such as myself, the report is a landmark moment in the journey towards a copyright law that will help, not hinder, Australia’s digital economy,” Watts said. “The introduction of fair-use principles into our copyright legislation would both protect the legitimate interests of content creators and allow those wanting to transform copyrighted material the space to develop and innovate within prescribed legal boundaries.

“The significance of this recommendation is highlighted by Google’s submission to the ALRC where it asserted that it could not have started its business in Australia under the current copyright framework. Nor, might I add, could have Apple or Facebook. I want companies like this to start in Australia.”

“A copyright regime that permits innovation is required to attract the companies and communities that will make Australia a leader in the digital century ahead. Many online communities often transform other’s copyrighted work by adding new uses for data or by creating completely new artistic works through what US academic Lawrence Lessig calls ‘remix culture’. They may create content like the political satire videos of Australian, Hugh Atkin, who use sample clips of Australian and US political culture to entertain millions of fans. Such an active relationship between content creators and their audiences should be celebrated, not punished, so long as these new uses are not unfair, considering a range of explicit considerations.”

Watts also saved some barbs for the Liberal Party, in particular Attorney-General George Brandis, pointing out that one of Brandis’ inspirations, Nobel Laureate Friedrich Hayek, had believed in the need for intellectual property reform. “It seems that Senator Brandis’ commitment to liberalism dominates his speeches but does not make it into his legislative agenda,” Watts wrote.

The Labor MP also pointed out that the new Australian Human Rights Commissioner Tim Wilson, a member of the Liberal Party until his recent appointment, had appeared to make the mistake of assuming that Australia had a fair use doctrine in some of his writing.

The news comes as a cluster of Australia’s most high-profile digital rights organisations, including Electronic Frontiers Australia, CHOICE and the Pirate Party have backed the Australian Law Reform Commission’s strong call for so-called “Fair Use” provisions to be introduced into the Copyright Act. CHOICE said it had been “obvious for many years” that Australian copyright law was “broken”. The Greens have not yet commented on the issue, but are believed to be in favour of the suggested fair use provisions.

opinion/analysis
Watts is one to keep an eye on in Parliament — another of Labor’s young guns interested in technology matters. You can find out more about him in our article reporting his recent election victory in Nicola Roxon’s seat of Gellibrand. I hope Shadow Attorney-General Mark Dreyfus is paying attention to the fact that not everyone in the Labor Party is a conservative — some actually do legitimately hold the title of “reformist”, strange as that may sound in this age where Labor and the Coalition appear to be marching in lockstep directly away from the wishes of the Australian population in so many areas. Fair use’s time has come in Australia. It should not be up to junior MPs alone to point that somewhat obvious fact out.