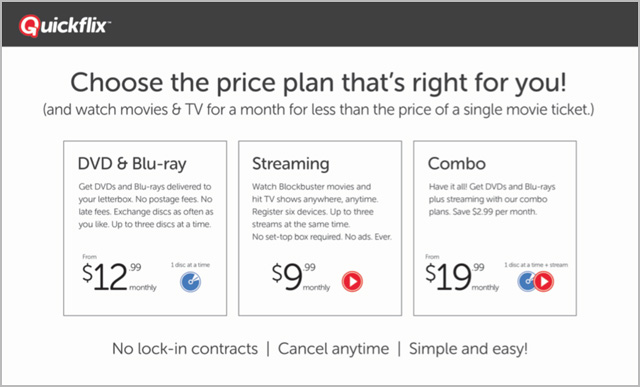 news Australian movie and TV streaming company Quickflix yesterday announced the beginning of what it believes to be “a new-era in affordable home entertainment” with the launch of its new subscription options to its IPTV service, including streaming of TV shows and movies for only $9.99 per month.

According to a statement issued by the company yesterday, Quickflix’s Australian customers can now enjoy unlimited streaming of selected TV shows including those from US premium network HBO and the UK’s BBC as well as blockbuster movies from Hollywood and Kids TV in standard definition (SD) or high definition (HD) for one low monthly fee of $9.99. The network says this makes its offering “by far the most affordable service of its kind”.

Under the $9.99 per month subscription, customers have the flexibility of streaming to up to six registered devices including “a wide array” of smart TVs, game consoles, Blu-ray players, mobiles, tablets, PCs and other devices. Under the one subscription a family or household is eligible to stream up to three movies or TV shows concurrently. Streaming of premium latest release movies pay-per-view and current and recent seasons TV pay-per-episode or season pass is also available for an additional charge.

Quickflix has also announced a new entry-level subscription plan for its online DVD rental postal service of $12.99 per month for one DVD (includes Blu-ray) out-at-a-time with no limit on the number of times a DVD is exchanged in the month.

Quickflix Founder and CEO, Stephen Langsford, said: “We believe our new entry level streaming plan of $9.99 per month offers customers the best value proposition and provides unparalleled choice and convenience compared with Foxtel’s $19.99 per month plan which only includes standard definition movies and is limited to PC, Mac and iPads.”

“What customers want is streaming to their TV screen and their mobile devices. Our streaming service does both and is growing at pace with well over 7.5 million movies and TV shows streamed to date and the numbers of hours streamed on Quickflix growing by about 20 per cent per quarter.

“We’re pricing our subscription streaming service at only $9.99 per month so customers won’t even have to think twice about the price. We think all the great content we offer for the family at about half of what it costs to go to the cinema for a single ticket or half of Foxtel’s Presto service is irresistible.”

“Quickflix is about making watching movie and TV shows more enjoyable. Our online DVD rental service did away with video store late fees. Our streaming service has done away with the need for a set top box and committing to long-term contracts. We’re also committed to continuing to expand our range of latest release movies and hit TV series from the major networks and studios and we’ll be launching more great content over the weeks and months ahead.”

According to the company, Quickflix’s online DVD rental service offers access to Australia’s largest range of latest release and catalogue movies and TV shows, over 60,000 DVD and Blu-ray titles in total. The three new DVD and Blu-ray subscription plans of one, two or three discs out-at-a-time with unlimited exchanges and postage paid are priced at $12.99, $22.99 and $29.99 per month respectively or combined with streaming for only $19.99, $29.99 and $39.99 per month respectively, a saving of $2.99 per month.

opinion/analysis
$9.99 per month for unlimited access to Quickflix’s IPTV streaming service? I do believe I will be signing up to that immediately, at least as a test run. It’ll go nicely alongside the similarly small fees I pay for access to other IPTV services such as Crunchyroll for anime. I’ve been a long-time subscriber to Quickflix’s DVD rental service (although not over the past several months), and so I know the company is pretty reliable. I haven’t given its IPTV offering a try for a while, but at this price point it does very much feel like an impulse purchase. Perhaps time for a review on Delimiter as well.

In terms of wider analysis, this clearly looks like a land grab to try and lock in IPTV subscribers ahead of Foxtel’s recent launches in Australia of on-demand IPTV movies and TV options. Personally I feel as though neither party is really going to take off too heavily just yet though; I suspect it will take a major player such as Netflix launching in Australia to get that mainstream acceptance coming through; and perhaps some more broadband infrastructure upgrades.