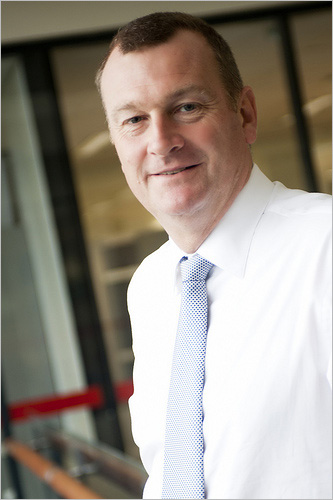 news Long-term Oracle Australia and New Zealand managing director Ian White has resigned from his post and will leave the company, ending an eight and half year tenure successfully leading the local operations of one of the globe’s largest technology giants.

White was appointed as vice president and regional managing director of Oracle’s Australia and New Zealand business eight years and seven months ago, according to his LinkedIn profile. Prior to that point, he was general manager of Oracle’s Western Region for over seven years. During that time, the executive has steered Oracle’s local operations through countless changes.

Most of those changes have been associated with Oracle’s many acquisitions, some of which have caused significant change within the company’s Australian customer base — not all of it easy to deal with.

In January 2006, for example, Oracle bought rival software vendor Siebel Systems. The acquisition spurred a number of very public complaints by some Australian customers, who took to customer forums to publicly make their concerns known.

The March 2007 acquisiion of business intelligence software vendor Hyperion was less controversial but still brought Oracle a number of new Australian customers, as did the January 2008 acquisition of BEA Systems. Primavera followed that same year in October, but it wasn’t until January 2010 that the next really big buyout happened, when Oracle finally put paid to the lengthy decline of Sun Microsystems by buying the company and re-tooling its hardware offerings to support Oracle’s software stack.

Over the past eight and a half years, Oracle has also been involved in many major projects. The Australian Taxation Office’s mammoth Change Program used Siebel software, as did the Department of Immigration and Citizenship’s Systems for People Initiative. Oracle is currently engaged in a massive core banking replacement project with the National Australia Bank.

Throughout this period, White has stewarded Oracle Australia and New Zealand securely; safeguarding the local implications of dozens upon dozens of acquisitions, helping to oversee major software projects and keeping controversy and customer problems to a minimum. He has also integrated hardware products into Oracle’s line-up, as well as local datacentre-delivered software as a service offerings.

Along the way, Oracle Australia and New Zealand’s revenue has grown substantially, and the executive has outlasted the local managing directors of virtually every other enterprise IT vendor — becoming a stalwart of the constantly changing industry.

Delimiter believes White will leave the company today. His replacement will be Tim Ebbeck, a long-time managing director of Oracle arch-rival SAP. Ebbeck, who announced his appointment on LinkedIn this week (as first reported by iTNews), led SAP Australia and New Zealand from March 2003 to January 2012 — a similar period as White led Oracle.

In that period, Ebbeck also oversaw a number of major acquisitions, with SAP picking up major companies like Business Objects, Successfactors and Sybase. SAP has also been involved with major IT projects in a similar fashion as Oracle — for example, the billion-dollar core banking platform upgrade at the Commonwealth Bank of Australia.

Since leaving SAP, Ebbeck has held a variety of posts, including an eighteen month stint as chief commercial officer at NBN Co, where he also assisted with NBN Co’s Strategic Review. He also sits on the board of CPA Australia, and is a trustee of the Powerhouse Museum.

However, Ebbeck’s time at SAP was not without controversy. In March 2011, for example, Ebbeck broke ranks dramatically with other leaders in Australia’s technology industry in their support for the Federal Government’s flagship National Broadband Network project, declaring the initiative a “wasted investment” because it didn’t focus on wireless technology.

“A national broadband network that is not delivering mobility as its principal connection approach is, in my view, wasted investment and opportunity,” Ebbeck said, according to a copy of the speech distributed by SAP. Despite Ebbeck’s comments, he joined NBN Co as its chief commercial officer in July 2012.

In May 2011, Ebbeck also used Twitter to attack San Francisco-based technology analyst Ray Wang, who has a significant social media following. “Ray, planning to stop following you because too much personal rubbish for an analyst”, Ebbeck wrote. The executive has also posted other controversial comments on Twitter. He appears to have deleted his Twitter account. He will join Oracle this month.

opinion/analysis
Huge kudos to Ian White. He’s done an incredible job with Oracle Australia over an incredibly busy period, with tonnes of acquisitions and industry change, and with some massive IT projects. Of course, there have been some project failures during that period, but in general White has kept Oracle Australia and New Zealand massively on track during that period.

There are few other figures that I respect more in Australia’s IT industry than Ian White. I’m not sure what the executive has planned next, but I don’t think many who have worked in IT over the past decade will forget his legacy. Now it’s up to Ebbeck to keep the ball rolling.

I also wonder how Oracle’s local senior staff will react to the long-time chief of their main rival being elevated above their heads. When you get an executive such as White who’s been in place for almost a decade, you tend to get a number of executives underneath them gradually positioning themselves as their successor. I’m sure some won’t be 100 percent happy about Ebbeck’s appointment.