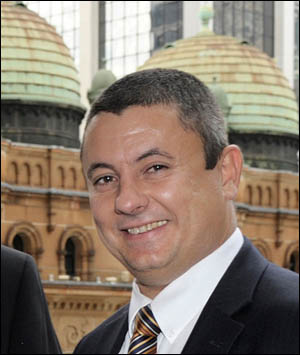 Goodlace has listed his occupation as “Not working” on what appears to be his LinkedIn profile, and has shifted his Sun role into his past rather than current employment history. However Oracle declined to comment on his fate.

The departure — which appears to have first been reported by ARN — seems to have come as part of a wider shake-up inside the larger Oracle/Sun group in the wake of the acquisition.

ARN also pointed out, and his LinkedIn profile confirms, that Sam Srinivasan, previous the local partner sales director at Sun, has now taken over responsiblity for all end user sales in NSW, Queensland and the Northern Territory, for what his profile describes as the “systems line of business”.

Wider departures are also going on within the group — Sun’s long-standing chief open source officer Simon Phipps has posted on his blog that he is to leave the company, although he did not state a reason for his departure.

Goodlace’s tenure leading Sun in Australia was brief. He was appointed acting managing director for the company locally on 4 February 2009, replacing Duncan Bennet, who resigned to found technology startup consultancy Advocait and in January this month took a post as director of sales — commercial for VMWare.

Goodlace had previously been Sun’s director of sales in Australia and New Zealand.