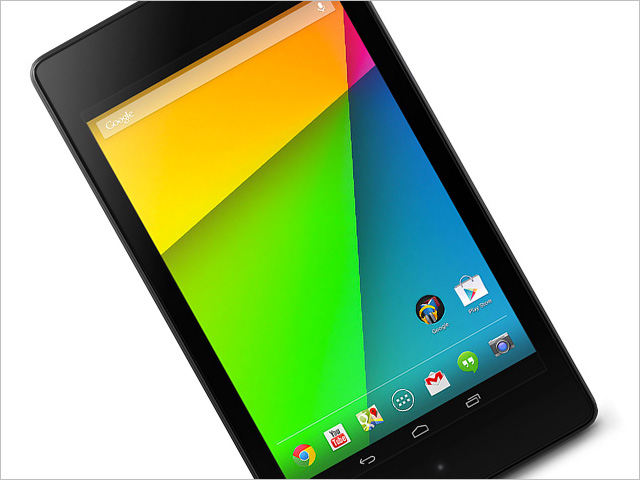 review The new version of Google’s flagship seven inch tablet, the Nexus 7, has landed in Australia. The first edition of the Nexus 7 proved a hit locally and helped Android finally succeed in challenging Apple’s dominance in the tablet sector. But does its successor represent a worthy upgrade or only a minor improvement? Read on to find out.

Note: Sections of this article are largely identical to our previous preview of the new Nexus 7. If you’ve read that article and are only interested in how the Nexus 7 performs in the wild, we recommend you skip the ‘Design’ and ‘Features’ sections and skip to ‘Performance’.

Design
The design of the previous Nexus 7 was one of the aspects of the device which we liked the most (see Delimiter’s review here). It was light enough, thin enough and small enough to hold in one hand, yet had a velvety leathery back which made it eminently grippable in a way that the iPad mini, the Nexus 7’s closest competitor, has never been.

The design of the new Nexus 7 follows this same scheme, but Google has improved the tablet even further. You get a similar leathery, grippy dark grey/black back cover for the tablet, but it looks a great deal more classy, and the metallic rim around the edges of the old Nexus 7 is gone. The same buttons (volume, on/off) are in the same places on the left-hand side of the tablet, but they also look a little more refined.

The last thing which you really need to be aware of when it comes to the new Nexus 7’s design is it multimedia capabilities. The screen resolution of the tablet has been bumped up dramatically (to 1920×1200) compared with the old model’s 1280×800, giving the new Nexus 7 one of the highest resolution screens on the market at 323 pixels per inch. It’s also gotten a new pair of in-built stereo speakers. What this means is that Google has been able to substantially beef up the main design element of the Nexus 7 — its screen — as well as integrating what we expect to be much better sound capabilities.

Features
Many areas of the new Nexus 7 have been improved, when it comes to its featureset. We’ve already mentioned its new screen and stereo speakers. In our view, these are almost reason in themselves to upgrade, with the new screen resolution making the Nexus 7’s screen one of the best on the market for any tablet, bar none. Great speakers are also rapidly becoming a necessity in any modern tablet, given how much we all use them for consuming multimedia (for me, it’s YouTube videos of Dark Souls PvP matches, while lying on the couch). Google says the new speakers deliver “surround sound” by German research group Fraunhofer.

There’s also a new five megapixel camera on the back of the new Nexus 7 (the old model had no rear-facing camera). The new CPU is a beastly Qualcomm Snapdragon S4 Pro running at 1.5GHz, and an Adreno 320 graphics chip running at 400Mhz is also on-board. You also get the latest version 4.3 of Android, although previous Nexus 7 devices are also upgradable to this version from 4.2, so that’s not a huge exclusive feature.

Apart from these upgrades, much of the rest of the new Nexus 7’s features are similar to those of the old Nexus 7. You get a battery of about the same size, dual-band Wi-Fi (2.4Ghz/5Ghz) up to 802.11n, NFC, Bluetooth 4.0, wireless charging, a microUSB port, 3.5mm audio, an in-built microphone, GPS, gyroscope, accelerometer, compass and ambient light sensors, and support for 4G mobile broadband is optional, including the 1800Mhz band primarily used in Australia. 2GB of RAM is up from 1GB of RAM in the previous model, and you can again get 16GB or 32GB of on-board storage.

What we see in general from the new Nexus 7 in terms of its featureset is that it really brings the model up to date in terms of the wider market, and pushes the bar further out in some areas, such as its screen. Of course, a lot of the ‘secret sauce’ in tablets these days is not in feature lists per se — but relates more to the design and software integration of the devices. Android tablets have been around for some time with high-end features — but it wasn’t really until Google’s highly cohesive and inexpensive Nexus line came around that they started gaining ground on the iPad. We see more of the same from the new Nexus 7.

Performance
OK, let’s just get this out of the way. I absolutely loved the new Nexus 7.

The old model released in mid-2012 was great in many ways. Android has always struggled on tablets. For a long time, the operating system just wasn’t ready, and then for quite a while hardware manufacturers, even Samsung, struggled to bring Android tablets to market which featured solid hardware/software integration. With a few exceptions, they were kludged together and felt a little like retro-fitted quasi-laptops rather than the seamless touch devices which Apple’s iPads represent.

Really for the first the Nexus 7 changed the Android tablet paradigm, and it was hugely popular as a result. And the new Nexus 7 improves on this benchmark in almost every area.

Physically the tablet just feels fantastic. It’s very light, very thin and very grippy — everything you want from a tablet which is designed to be held in one hand. Its new screen is fantastic, and better than pretty much any other seven inch tablet screen that I’ve ever seen, although Apple’s new iPad minis will give it a run for its money.

The speakers are solid and much better than the speakers on the previous model, and battery life was more than satisfactory. In particular, if you leave the new Nexus 7 dormant, it’ll conserve battery life very well, meaning you can leave it on a desk and pick it up every day or so over a period of weeks for casual work without having to expect that it’s coming close to needing to be charged. And of course the software is also great: We love the default, stock Android experience, and the new Nexus 7 embodies that ideal.

The only complaint we have about the Nexus 7 is its rear-facing camera, which is just not up to the same standard which we see from modern smartphone cameras. This isn’t too much of an issue, however — as we’ve found we mainly tend to use the cameras on our tablets to take happy snaps or videos in our loungeroom. If we’re out and about we tend to have a smartphone on hand. The model on the Nexus 7 is fine for these purposes, although we prefer the recent models on Apple’s iPad line.

Conclusion
You can buy the 16GB or 32GB Wi-Fi versions of the new Nexus 7 online from Google’s Australian play store, or get the 32GB 4G model for $399. Wow. That’s a very competitive price, considering that the next most competitive model, Apple’s iPad mini with retina display, will cost you $479 at a minimum — and that’s without 4G compatibility. The only other model we’d be considering right now is Samsung’s Galaxy Tab or Galaxy Note editions — but, to be honest, the Nexus 7 looks to have those mostly beat on price and specifications at this point.

Folks, this is a no-brainer. If you want to buy a 7″ or 8″ sized tablet in November 2013, we’re going to recommend that you go out and pick yourself up a new Google Nexus 7. Unless you’re absolutely wedded to the iOS platform or need it for some specific purpose, this unit’s price advantages over Apple’s options and hardware/software advantages over the Android competition make it a winner. Feel free to consider the Galaxy Note 8.0 if you really need a stylus.

We’ll be giving away one of these babies to readers later this week as a result of our recent newsletter subscription drive, so stay tuned to find out if you’ve already got one coming on the way.