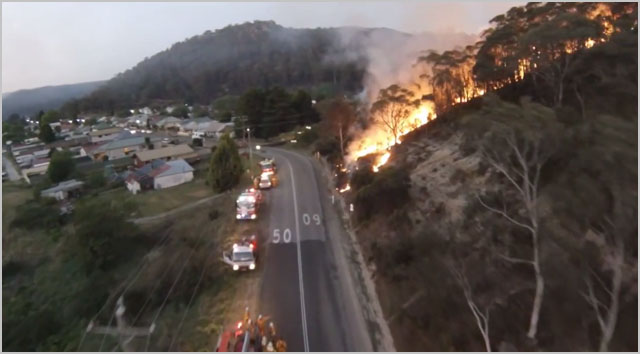 news The Civil Aviation Safety Authority has issued a strongly worded statement warning the operators of small remotely piloted drones which have produced amazing footage of bushfires in the Blue Mountains that they are putting fire fighting operations at risk and should be aware of appropriate regulations.

Over the past week at least one visually stunning video of bushfires in the Blue Mountains, taken at Lithgow, has surfaced on YouTube. Set to sombre music, the video shows a close-up video of the dangerous bushfires being fought by firefighters, as well as devastated bush and suburban areas. The video features footage which would be impossible to obtain through filming from a helicopter, and is set to sombre music. Still photos from the footage are published in this article to give a flavour of the footage, although readers are recommended to view the video themselves.

However, the Civil Aviation Safety Authority late last week published a sattement warning drone operators that they were putting fire operations “at risk”.

CASA’s Director of Aviation Safety, John McCormick, said the unapproved use of remotely piloted aircraft during a bush fire was irresponsible.

“People who have a ‘drone’ must fly according to the Civil Aviation Regulations and they must use their common sense,” McCormick said. “Flying an unapproved remotely piloted aircraft near fire fighting aircraft, fire fighters and fire fighting vehicles is dangerous.”

opinion/analysis
So where should we stand with relation to this kind of footage? Is CASA right? Does the use of drone footage in these kinds of situations pose a risk to fire fighting operations? Should drone operators stay away from such zones? Or does the operation of these drones have some merit that should also be considered?

The first thing that no matter what the regulator thinks, this kind of activity will happen anyway. There is absolutely no doubt that this sort of activity will be ongoing. It’s extremely hard to police, and like most of Australia’s government regulators, CASA will no doubt be extremely slow to move against individual drone operators, even if it is able to determine which particular operator was flying their drone across a certain fire area or other disaster zone. In addition, drones are becoming more and more ubiquitous as the technology becomes cheaper and easier to access.

Then, too, the footage produced by these kinds of drones is simply stunning. Because there are no humans on board, and the machines are very small and maneuvrable, they are able to go places no human-piloted vehicle would be able to — such as directly above a raging fire. If the drones get destroyed in such a blaze, it’s not a huge deal — merely a matter of a few thousand dollars worth of equipment. Mainstream media outlets are already reproducing drone-sourced footage on television, and it’s only a matter of time before mainstream media starts using drones as well.

However, CASA does also have a point. This kind of activity is potentially dangerous, and it’s at least very annoying and distracting for firefighters who are trying to save lives and property.

With this in mind, what I’d like to see is CASA put some kind of formal code of practice around the use of drones. Something a lot more understandable than its current codes. I’ve had a look, and for the average civilian drone operator, they’re impossible to understand. CASA needs to work with drone operators and industry associations if possible to get an easy to understand code of practice around their operation. Perhaps even a cheap licence system akin to a driver’s licence.

Because let us not forget — if CASA does not do this, the drones will come anyway. There’s no stopping this movement now.