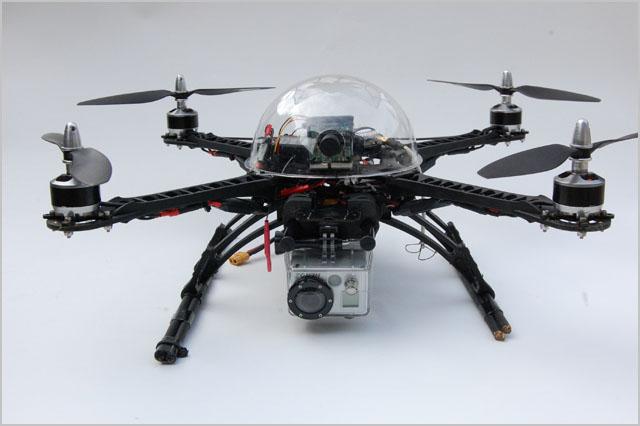 news The South Australian police force has gone to market to buy a fleet of aerial drones to assist it with surveillance operations, as controversy continues to swirl around the use of the technology in Australia’s skies and whether it endangers residents and/or invades their privacy.

The drone initiative was unveiled by South Australian Police Minister Michael O’Brien in late June this year. At the time, O’Brien said the so-called ‘unmanned aerial vehicles’ represented a “cost-effective solution for a range of policing operations”, giving police a “significant advantage during incidents and operations”, especially in situations where convential aircraft such as helicopters could not be used. SA Police was expected to buy four standard quadcopters to assist with its operations, at a total cost of around $200,000.

This week the tender documents for the drone operation were published through the tendering system of the South Australian Government. The documents reveal that the police force requires drones capable of providing “overt tactical and search and rescue capability”, as well as “covert capability to assist in investigations”, during both day and night, in moderate weather and environmental condictions.

SA Police wants the drones to be delivered qiuckly — no later than 20 December this year. They will be deployed from the rear of a standard SA Police vehicle and will need to become operational in less than 30 minutes. Their capabilities are described as “self-sufficient” and they will need to operate in both the metropolitan Adelaide and rural areas of South Australia.

The drones will have a minimum effective flight range of one kilometre, and will include both a return to base capability if the transmission signal is lost between the drone and their operators, as well as an included GPS signal so that the drones can be tracked if they are lost or stolen.

Critical to the operation of the drones will be their sophisticated camera capabilities. Minister O’Brien said that the devices would feature still, video and infra-red cameras, and the tender documentation released this week makes clear that GPS information should be overlaid with the photography.

“The camera system for the RPAS must be of a high quality and should overlay images with Global Positioning System (GPS) points. The images/footage must be of a standard sufficient to be utilised as evidence. This overlay can be done at the base station but will require on-board recording ability to retain the original footage,” states the tender documentation.

“The footage must have a simple file format usable on the existing Windows based SAPOL and Court computer systems. Both cameras should have the ability to provide footage in day and night time akin to a Forward Looking Infrared (FLIR) system. The transmission must be capable of providing vision that enables viewers to obtain “situational awareness”.”

The South Australian police force is not the only law enforcement agency in Australia to have commenced operating a drone fleet for surveillance and covert operations.

In March, for instance, it was reported that Queensland’s police force had plans to launch a drone fleet to deal with drug crop identification, traffic operations and even to deal with natural disasters, following a successful trial of the technology in 2012. At that stage Queensland Police Minister Jack Dempsey highlighted the possibility of buying surplus military-grade drones for mass-scale surveillance.

The news comes as controversy continues to swirl around the use of drones in various applications in Australia.

The Civil Aviation Safety Authority, for instance, is cracking down on the personal use of the technology. Last week it issued a strongly worded statement warning the operators of small remotely piloted drones which have produced amazing footage of bushfires in the Blue Mountains that they are putting fire fighting operations at risk and should be aware of appropriate regulations.

Separately, academics such as Michael Salter, a lecturer in criminology at the University of Western Sydney, have warned that the use of drones may not actually aid in policing efforts. “Rather than being based on fact, the dramatic claims of Australian police about the crime-fighting powers of drones appear to parrot the marketing material of weapons manufacturers and military industry groups,” wrote Salter in late September.

“Military tactics and hardware can make policing more appealing to recruits and generate impressive media spectacles, but they do not prevent or solve crime. The underlying causes of social disorder go unaddressed while public funds are spent instead on expensive but ineffective and potentially dangerous toys.”

And civil liberties groups have warned that police shouldn’t be given drone powers without an extensive debate about the merits of the technology and privacy concerns.