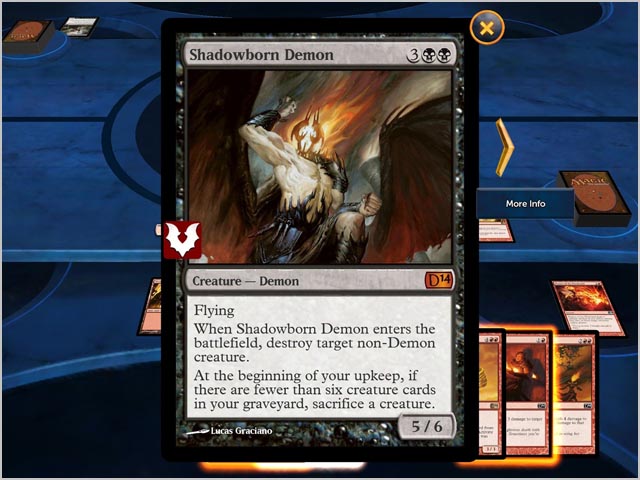 review The games industry tends to mock games that have a yearly release cycle. Call of Duty and the FIFA games are prime examples – games that people accuse (rightly or wrongly) of phoning in the barest minimum of new features and innovation in order to sell to the same people that bought the previous year’s game.

Duels of the Planeswalkers is a series that I can get bought into on a yearly basis. For the last couple of years (read our reviews for the 2012 and 2013 editions here) this is a game that Wizards of the Coast and developer, Stainless Games, has very cleverly reworked each time to offer players something new, while refining the experience for newcomers.

This year’s release comes with a major new feature – sealed play. From the first first game release Magic fans have been requesting the ability to build their own decks for play in the Duels of the Planeswalkers, and to date the developers have resisted. After all, the reason this series is so much more accessible for more casual Magic fans is that they don’t need to manage through the ridiculously complex process of building the perfect deck of cards out of the innumerable combinations of cards possible.

Duels of the Planeswalkers has always meant to be a “gateway drug” into the game and a pick-up-and-play experience for less serious Magic players. But the developers have finally relented and the popular sealed version of the game – where players open a set number of packets of cards and build a deck out of whatever they find – is the focus of the 2014 edition of the game.

It’s not without its share of problems. Though the developers have done as much as possible to make coming to grips with deck building easy for newbies – including a handy “deck strength” meter that dynamically adjusts as you add and remove cards from the build – the basic fact of the matter is that the inclusion of sealed play is going to overwhelm some of the audience that got into this series because of its simplicity. At the same time, as great as it is that you’re able to build your own decks, serious Magic players are busy playing Magic the Gathering Online where they’re playing with their own cards. It seems more than ever that Duels of the Planeswalkers is aiming for the middle ground with 2014, and I worry that it will miss the mark for both.

With that said, the sealed play works really well, thanks to an interface that is refined to the point of perfection in Magic 2014. Every inch of the iPad’s considerable screen space has been utilised in a way that provides players with all the information they need in a very clean and efficient manner. Most of this is going to go unappreciated, but for a game of Magic’s complexity it is all-to-easy to be overwhelmed with data. That doesn’t happen here – the game is clean, logical, and after a couple of tutorials even a complete newcomer will be comfortable using the preset decks.

Outside of the sealed game is the campaign, and this is the best starting point for those aforementioned newcomers. Interestingly this time around the opponent’s deck is not randomised in the campaign – they will play the exact same cards in the exact same order wherever possible, subject to what players themselves do on the battlefield. This is a new feature to the Planeswalkers games, where the random nature of the enemy deck would mean that at times it was possible to lose games before they’d begun.

I applaud this decision by the developers. While it initially felt artificial, after a couple of games I came to understand that the game’s campaign mode had become a glorified puzzle game that tests your understanding of the rules and mechanics of Magic the Gathering. It became a perfect training tool for the game’s online multiplayer and sealed play.

It’s also worth noting that year after year this series of games gets better and better looking. You wouldn’t think before the Planeswalker games that a card game could be an impressive visual experience, but the art work and interface of Planeswalker 2014 is so slick that this is one of the finest looking iPad games out there.

This series goes from strength to strength. I wish the other yearly release franchises would take some notes – this is how you keep a yearly schedule fresh.

Image credit: Wizards of the Coast