news A leaked draft copy of NBN Co’s latest corporate plan has provided further confirmation debunking the Coalition’s claim that Labor’s all-fibre version of the NBN could cost as much as $94 billion, as evidence continues to stack up that deploying fibre to the premises is not as expensive in Australia as previously thought.

In the six months before the recent Federal Election, it became common for senior Coalition figures to claim that Labor’s FTTP version of the NBN project would cost dramatically more than Labor had been predicting. The Rudd and Gillard administrations, as well as NBN Co itself, had consistently stated that the total cost of constructing the FTTP version of the NBN would cost around $44 billion, although NBN Co was also projecting that it would make a financial return on its costs of around 7 percent over a thirty year period, meaning that the NBN would eventually pay for its own construction.

“It will be $94 billion to the taxpayer,” then-Shadow Communications Minister Malcolm Turnbull told 7:30 host Leigh Sales in April this year, after the Coalition released its rival policy. “… apparently they’re ignoring the fact that it’s going to cost taxpayers $94 billion,” the Liberal MP told Sky News the same month. The claim was also repeated by a number of other senior Coalition figures such as then-Opposition Leader Tony Abbott, especially during the election campaign itself.

The veracity of the Coalition’s claim in this area is critical, when considering the debate between the use of different technologies in the NBN’s construction. If the Coalition’s claim is accurate and a FTTP-based NBN will cost significantly more to construct than Labor had been projecting, then the case for the Coalition’s much more modest, fibre to the node-based policy, which it has costed at $29.5 billion, is strengthened.

However, if the Coalition’s claim is not accurate, then much of its argument that the NBN should be built on a FTTN basis becomes less persuasive.

The Coalition’s background briefing document states that according to NBN Co’s most recent finalised corporate plan (PDF) published in August 2012, the average capital expenditure (capex) per premise involved in constructing fibre to the premises is around $2,400, plus some shared capex. However, the document argues, due to factors such as the complex work involved in getting FTTP to multi-dwelling units such as apartment blocks or other ‘non-standard’ premises, the cost would actually be might higher. Based on research from Macquarie Bank, the document estimates capex per fibre premise at $3,600. This adds $12.9 billion to the NBN’s total cost of construction, under Coalition calculations.

However, new evidence has emerged showing that the Coalition’s figures in this area are wildly inaccurate.

This week, the Financial Review newspaper published a leaked draft copy of NBN Co’s latest corporate plan (PDF), which was provided to the previous Labor administration before the election. In the document, NBN Co makes it clear that one aspect of the per-premises cost of connecting fibre to customers’ premises has dropped substantially.

“FTTP Customer Connect costs have decreased from an average of $2,400 per premises during the Initial Site releases to an average of $1,100 for more recent sites completed under the volume rollout,” the document states. It also includes the following table: 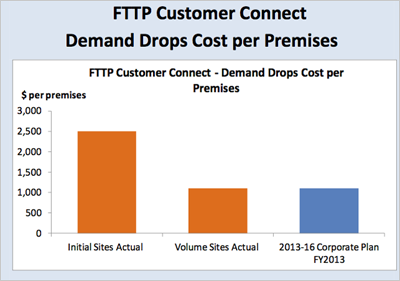 This $1,100 cost, known as the ‘FTTP Customer Connect’ cost, is one cost input which goes into the overall per premises cost which the Coalition discusses in its background briefing document. It is the cost involved in connecting fibre from the street to a residential or business premise. The other cost, known as the ‘FTTP Access Cost’, is the cost of per premise of laying fibre down streets.

These real-world costing figures are consistent with similar data released by NBN Co in April this year, when the company provided a report to the Parliamentary Joint Committee on the NBN (PDF). That report shows that when NBN Co first started rolling out fibre in early stage areas such as Tasmania, its costs per premise were as high as $5,000 to $7,000. Over time, however, this cost has come down dramatically. For new services, the total cost per premise (consisting of the cost of laying fibre to the street and then the cost of connecting individual premises to the NBN) had come down to very close to the $2,400 per premise cost which the Coalition’s background briefing document mentions, because both cost inputs had gone down. This is illustrated in the following tables: 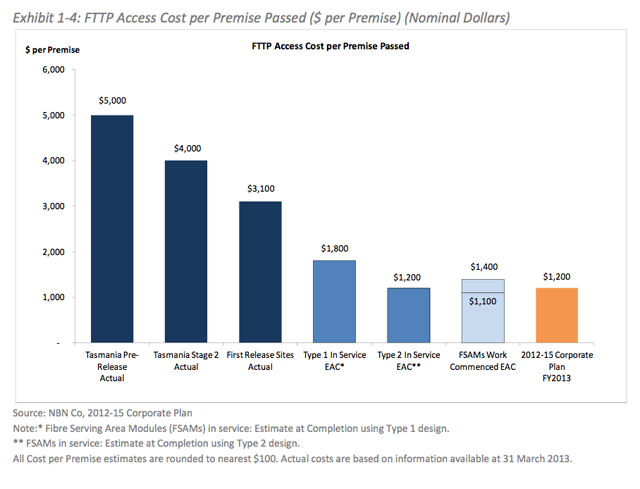 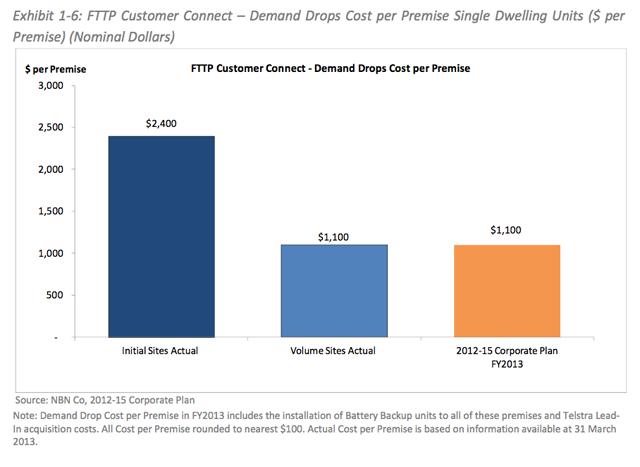 Furthermore, NBN Co also has some room to move with this figure. The company’s initial budget actually contains a 10 percent contingency figure, amounting to around a billion dollars, to cover issues with the cost of construction. Recent media reports have highlighted that some costs with respect to NBN Co’s cost of construction have indeed blown out — but NBN Co has also been able to find efficiencies with respect to its rollout which have kept its costs within its original predictions. This reflects the growing maturity of NBN Co’s fibre rollout skills, as its per premises capex costs also show.

Telecommunications analyst Paul Budde wrote on his blog this week:

“When the company started its rollout in the first release sites the initial cost was A$2,400 per home passed and A$5,000 per connection. Those costs have now fallen to A$1,100 and A$1,100-1,400 respectively – so, in total, around $2,400 per home. This certainly will not lead to a cost blowout of $90 billion as was suggested by Mr Turnbull when he was in Opposition.”

The ‘per premises’ costing claim which the Coalition made in its background briefing document is not the only aspect of its $94 billion costing claim which has been found to be questionable at the bare minimum. A significant analysis of the other claimed cost blowout aspects published by Delimiter 2.0 (paywalled) in early September, with assistance from senior Labor Party sources, found that the other aspects of the Coalition’s cost blowout claims were also questionable.

Despite the fact that the Coalition went to the Federal Election promising a cheaper FTTN NBN rollout, debate has one again ramped up about the merits of the FTTP versus FTTN rollout style, as well as in-between alternatives such as Fibre to the Basement.

New Communications Minister Malcolm Turnbull this week declared the Coalition was not wedded to its fibre to the node model and was “thoroughly open-minded” about the technology to be used in the network.

“As you know, as everyone knows, we’ve canvassed an example of that in our policy document, but let me say again, as I said to NBN staff today, I am, and the Government is, thoroughly open-minded, we are not dogmatic about technology; technology is not an ideological issue. We are completely agnostic about it. What we want to do is get the best result for taxpayers as soon as possible.” This ‘technology-agnostic’ approach is also found in the Coalition’s Statement of Expectations document, issued by Turnbull and Finance Minister Mathias Cormann to NBN Co.

Telecommunications analysts such as Budde have immediately interpreted Turnbull’s policy backdown as the Minister having given NBN Co “the opportunity to save the current NBN”.

“For me the key issue was that the review that he has announced is, in his own words, ‘not dogmatic’. He has first of all asked NBN Co to review its operations with the aim of coming up with changes that will see lower costs and a faster rollout within the current parameters of the project, this being mainly an FttH rollout,” wrote Budde in a separate blog post.